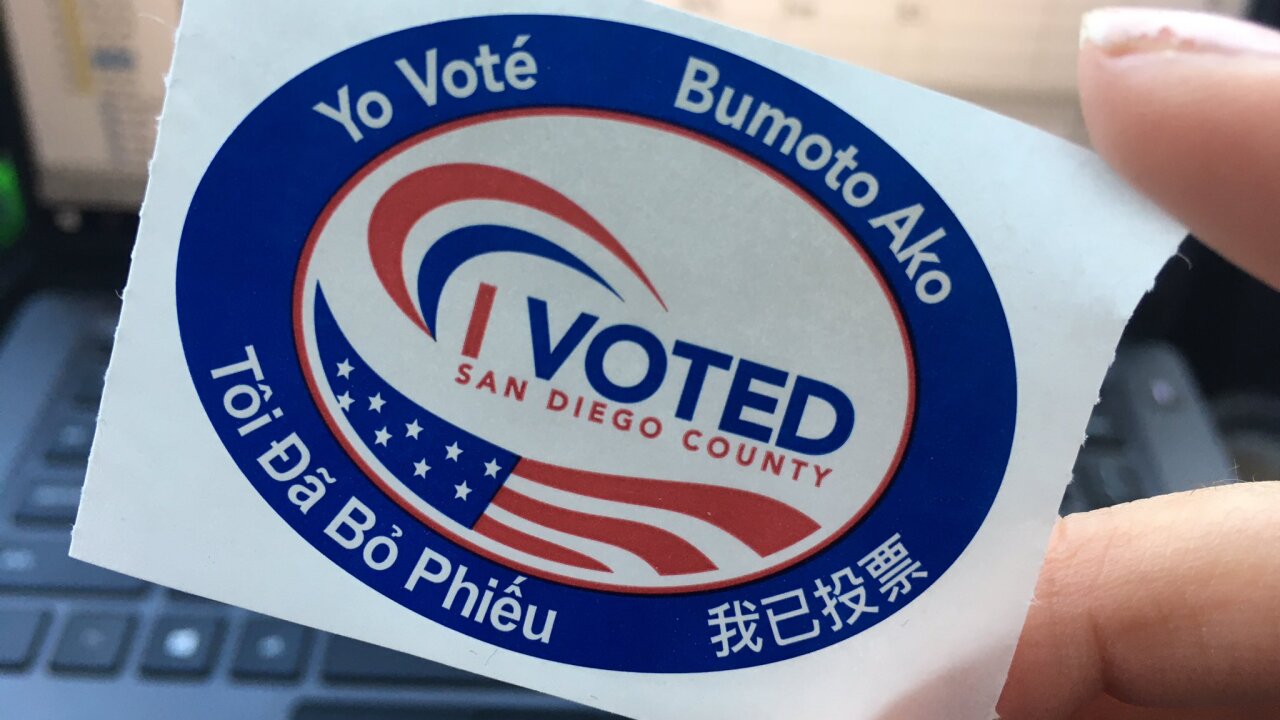 ABC 10News is your source for complete election coverage of all the important races. Visit our comprehensive Super Tuesday 2020 section for unique stories, exclusive scientific poll results, and interviews with the candidates.

UPDATE WEDNESDAY 8:17 AM
Local political analyst John Dadian discusses the results from Super Tuesday during an appearance on 10News This Morning:

UPDATE WEDNESDAY 6:40 AM
(KGTV) -- Measure C did not receive the necessary support it needed for passage in the City of San Diego.

If it had been passed, funding from a hotel tax hike would go towards city homeless programs, infrastructure plans and potential convention center expansion.

UPDATE WEDNESDAY 5:55 AM
(KGTV) -- Sen. Bernie Sanders appears poised out to win the Presidential Primary in California. Results show former Vice President Joe Biden just behind Sanders, with Michael Bloomberg in third with 15 percent of the vote and Elizabeth Warren in fourth.

UPDATE WEDNESDAY 5:05 AM
(KGTV) -- According to overnight results, California's school bond measure, Proposition 13, appears to be heading towards a defeat.

UPDATE WEDNESDAY 4:10 AM
(KGTV) -- Overnight results show Sen. Bernie Sanders in the lead in the California primary, with former Vice President Joe Biden just behind him.

While projections show Sanders on his way to victory in the Golden State, Biden claimed victory in multiple states on Super Tuesday.

Click here to get the latest election results in San Diego County and California.

UPDATE 9:47 PM
Hours-long wait times reported in Los Angeles County prompted Sen. Bernie Sanders' campaign to seek an extension for voters. The campaign argued polling stations should be kept open until 10 p.m., and anyone in line by that time should be able to vote, because of the long wait.

The campaign added that not doing so would "immediately and irreparably" harm county voters' "right to participate in our democracy."

UPDATE 8:47 PM
Early returns show that Ammar Campa-Najjar and Darrell Issa are leading the way among candidates in the 50th Congressional District with 34 percent and 25 percent respectively.

UPDATE 8:26 PM
Early returns show that Proposition 13, a statewide bond that supporters say would modernize schools, is failing with 53 percent of people so far voting "no" and 47 percent voting "yes."

UPDATE 6:30 PM
(KGTV) -- The San Diego County Registrar of Voters says it sent out more than a million mail ballots for the Presidential Primary. According to the registrar, 1.35 million of the ballots were sent by mail ahead of Super Tuesday. The office also reminded voters who haven't dropped their ballots off that polls remain open until 8 PM.

UPDATE 5:15 PM
SAN FRANCISCO (AP) — Some California voters are waiting in long lines because of technical glitches connecting to the statewide voter database or too many users trying to cast ballots at once. The secretary of state's office said election workers in 15 counties could not connect to the statewide voter registration database on Super Tuesday but that the issues have been resolved. Los Angeles County's new $300 million voting system also had problems. The electronic pollbooks were operating slowly because so many voters were trying to use them at once. Delays were up to two hours in some places. Technicians have added more devices in some polling places.

UPDATE 2:40 PM
(KGTV) -- A Super Tuesday polling location in Sacramento was left short-staffed over fears over the coronavirus. According to CBS 13 Sacramento, 10 to 15 temporary polling staffers canceled their plans to assist with the election.
.
Other Polling Issues around the Country: The Associated Press is reporting scattered reports of polling places opening late, machines malfunctioning or voter rolls being down marred voting in some of the 14 states voting Tuesday, but there were no reports of voters being unable to cast a ballot or security breaches.

UPDATE 2:33 PM
(AP) — California officials bracing for long lines are urging patience as voters cast ballots on “Super Tuesday” in what could be record turnout for a presidential primary election. A fraction of the 20.7 million registered voters in the heavily Democratic state has already returned ballots in early voting. Early voting started last month, but officials expect the bulk of ballots to be cast Tuesday. Enthusiasm is high for the election, which was moved up from its usual spot in June. But the election also coincides with a number of changes aimed at expanding voter participation and those changes may end up confusing voters or contributing to longer lines.

At 8:00 p.m., the Republican Party of San Diego is hosting its election party at the U.S. Grant Hotel in the Palm Court. Party Chairman Tony Krvaric will speak to open the party, and candidates will speak on the hour, every hour.

UPDATE: 11:07 AM
Some voters were turned away this morning at an El Cajon polling place after technical difficulties. 10News learned the volunteer in charge of the polling place at St. Luke Church on 1980 Hillsdale Rd. reportedly did not show up, leaving other workers to figure out how to turn on the voting machines. 10News will update the situation at this polling station shortly.

Voters in Kearny Mesa are describing their voting experience as “organized” and “easy.” @SDVOTE @10News #SuperTuesday

UPDATE: 10:49 AM
Here's what happens to the votes for candidates who drop out

(AP) -- With three candidates dropping out of the race in as many days, what happens to the votes already cast for them across the country? In large part, nothing, according to state election officials. And the frustration can be real for some voters who feel their vote didn’t matter, while others may feel they were a part of history simply by participating. Pete Buttigieg, Amy Klobuchar and Tom Steyer all announced departures from the race in the days following Saturday’s South Carolina primary.