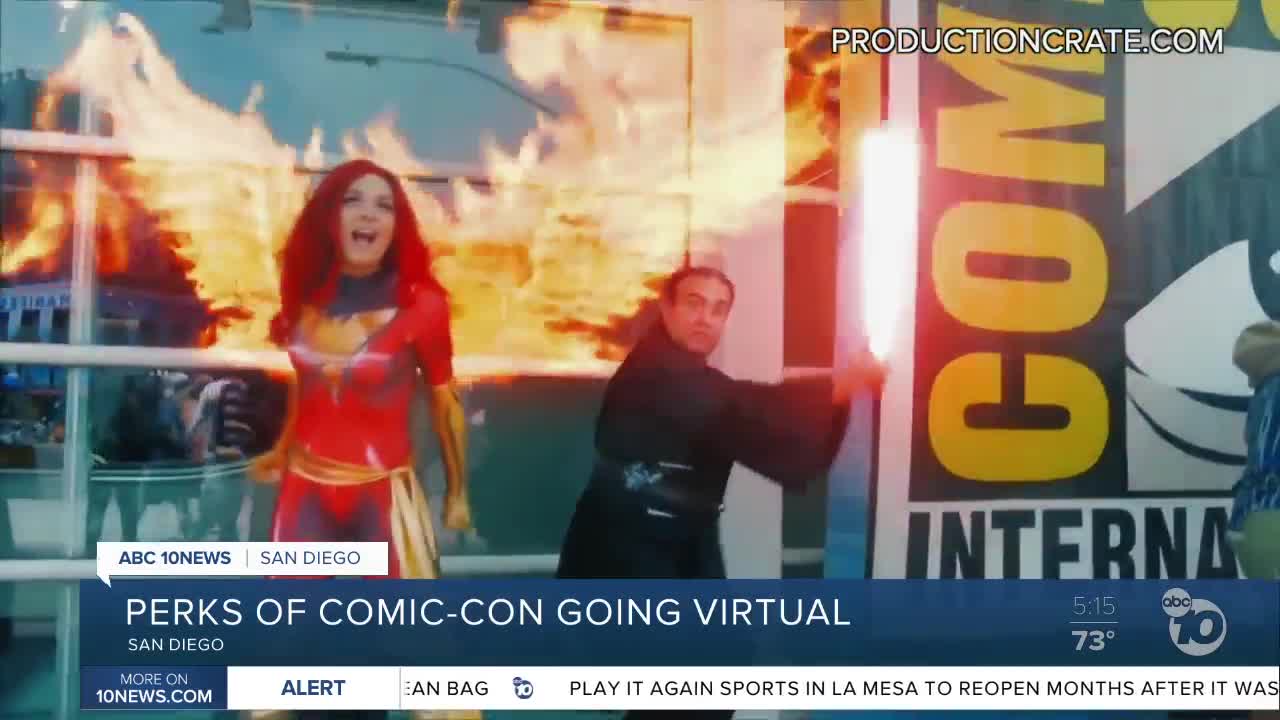 While there are no superheroes or villains in the Gaslamp Quarter this year, some say there are some perks of Comic-Con going virtual. SAN DIEGO (KGTV) — It's the first official day of Comic-Con 2020! This year though, there are no superheroes or villains in the Gaslamp District, as the convention is entirely online.

But many say they are perks of the Convention going virtual. Instead of going to Comic-Con, this year, Comic-Con comes to you.

First thing's first. Print out your badge, just to make it feel official. This year, the Convention even created a new pet attendee option!

Next, log onto the free online panels. Thursday's line-up included video presentations by anime superhouse, Crunchyroll, zoom-style discussions with artists and producers, as well as a read-through and Q&A sessions with the star-studded cast of the Star Trek Universe. The event was a true Hall H experience, minus the Hall H.

"As somebody who has parents that were in the Holocaust, you have to make the best of a situation. And that's what we did," panelist, Sandra Scheller, said.

Since 2018, the South Bay resident has hosted "The Art and the Holocaust" panel, where she shares stories and art of her late mother, Ruth Sax. Though there was no audience interaction this year, she says going virtual does have its perks.

Because the panels are uploaded on YouTube, there is no need to choose which panels to attend. There is no missing out if there are many going on at the same time.

"You can still go on and see it at any time," Scheller said. "If someone wants to go on the panel at two o'clock in the morning, six months from now, you're able to do that. And to use it as an educational tool in the schools. I love that!"

WHAT TO KNOW: Panels, exclusives, activities for San Diego Comic-Con@Home

Perhaps the biggest downside to Comic-Con going virtual may be felt by the cosplayers. They are unable to show off their creations. But there are some things that can ONLY be done virtually, like giving cosplay costumes the Hollywood treatment.

"They [Cosplayers] can still get their work and effort and their creativity seen online, just by making a video," Chris Kelly, CEO of Productioncrate LLC, said. "I think the best way to bring it to the next level is to add superpowers if you're a superhero."

Productioncrate LLC is a visual effects company out of Kearny Mesa. Through their free or premium subscription service, users can instantly make their videos "more awesome," as Kelly said. During this quarantine, he says 800,000 users are doing just that.

"Because you're at home, why not take advantage of it?" Kelly asked. "Learn a new skill-set, learn how to edit video, and have the coolest video anyone's ever seen!"

We asked Kelly if he can give a five-second clip of his interview with ABC 10News, the 'superhero feel.' Within minutes, he was able to add special effects, including lightning, fire, and music onto the clip.

Comic-Con encourages attendees to check out the virtual booths. Take a moment to shop online for exclusive merchandise to keep small vendors in business.