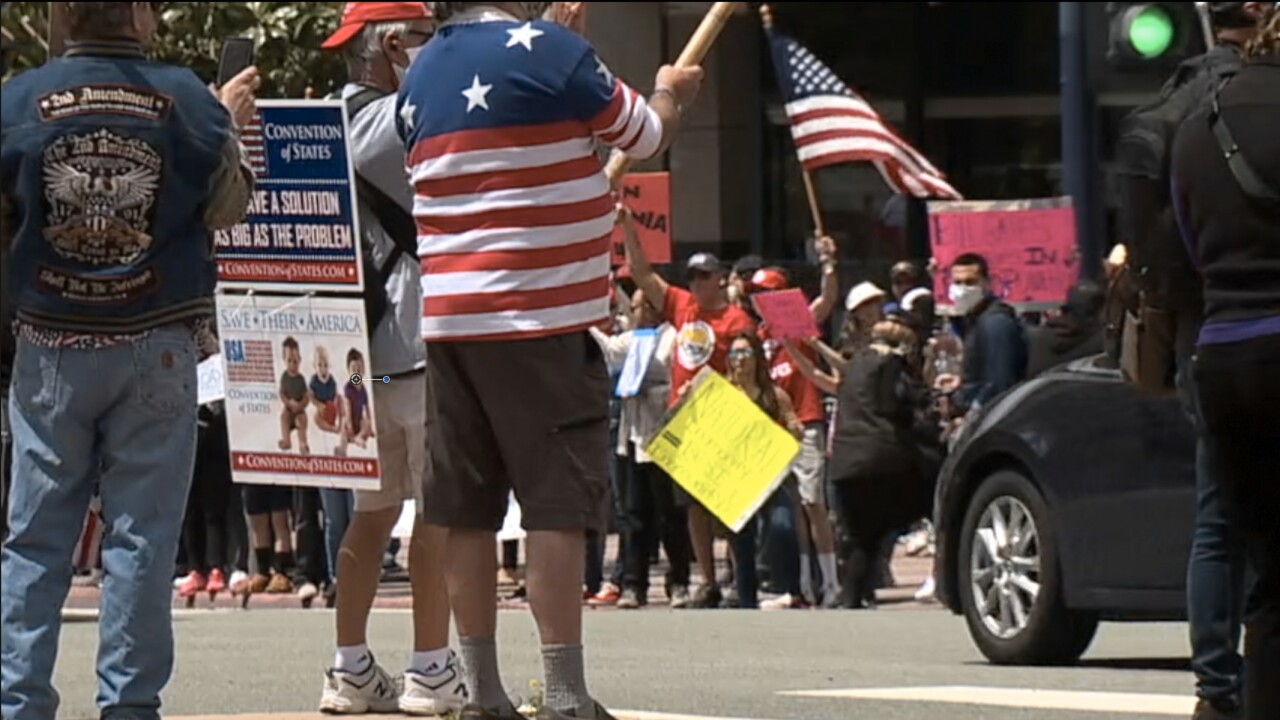 SAN DIEGO (CNS) - A woman who organized last weekend's protest in downtown San Diego opposing stay-at-home orders due to the coronavirus is facing arrest and possible misdemeanor charges that could result in 90 days in jail and a $1,000 fine, the woman and her attorneys said Wednesday.

Naomi Israel, 27, was one of hundreds who demonstratively opposed California's stay-at-home orders during a "Freedom Rally" Saturday afternoon in front of the Hall of Justice.

Israel is being represented by the Center for American Liberty, a nonprofit organization that has also challenged the state's stay-at-home order on various fronts, including filing a lawsuit against Gov. Gavin Newsom last week for prohibiting in-person church services.

Israel took to Facebook on Wednesday to discuss the case, writing "I will be arrested on Sunday for exercising my constitutional rights."

The San Diego Police Department confirmed it has contacted the City Attorney's Office "requesting their review to issue charges against the protest organizer for violating the county health order by organizing a gathering."

The Center for American Liberty said it is not aware of any other protest participants facing potential criminal charges.

Following Saturday's protest in San Diego and a related Sunday protest in Encinitas, many questioned why arrests or citations were not levied against the protesters for flouting public health orders prohibiting large public gatherings and asking people to stay six feet apart from one another.

Rev. Shane Harris, CEO of the People's Alliance for Justice, asked San Diego officials to issue citations to those who gathered and questioned why churchgoers were not allowed to congregate in person without penalty, yet the protesters were.

"Are we protecting the constitutional rights of some while ordering the rights of others to be knocked down?" asked Harris, who also said the protests represented "racial entitlement" and that people of color would not be allowed to congregate in a similar fashion without legal repercussions.

In a joint statement issued Monday by the SDPD and the San Diego County Sheriff's Department, the agencies said that although the events were allowed to go forward, legal consequences would still be in order.

"While no citations were issued at the protests, that does not mean prosecution will not be sought, especially to the organizers of these events," the statement read.

"Our client is being charged with a crime for participating in constitutionally protected activity. The right to assemble and to petition the government does not exist if there are topics that are off limits," Dhillon said.

Dhillon disputed that protesters did not practice social distancing, saying Israel and others took part "in a responsible protest adhering to social distancing guidelines. She, along with other protesters, stood six feet apart on a public sidewalk."

"We intend to fight San Diego's punishment of our client if the authorities decide to proceed with this ill-advised attempt to chill the speech of Americans," she said.