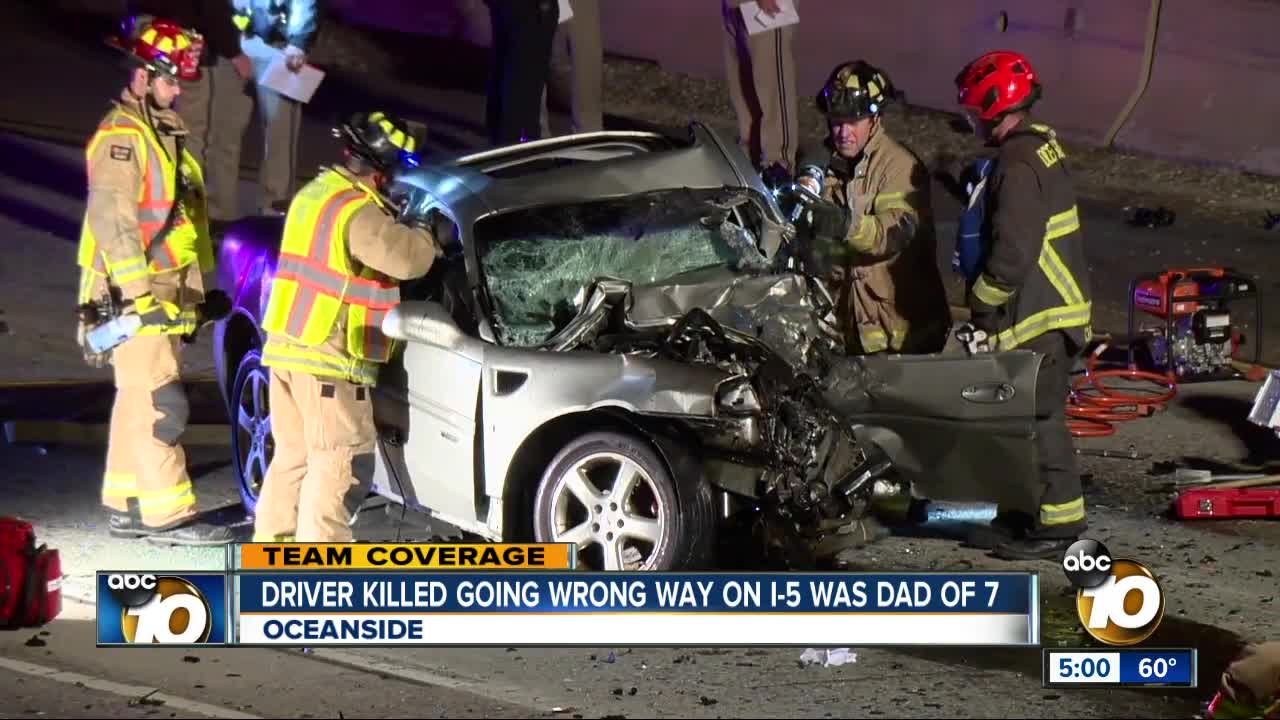 A suspect fleeing from officers and an innocent Camp Pendleton Marine were killed in an early-morning head-on crash following a chase on Interstate 5 in Carlsbad. 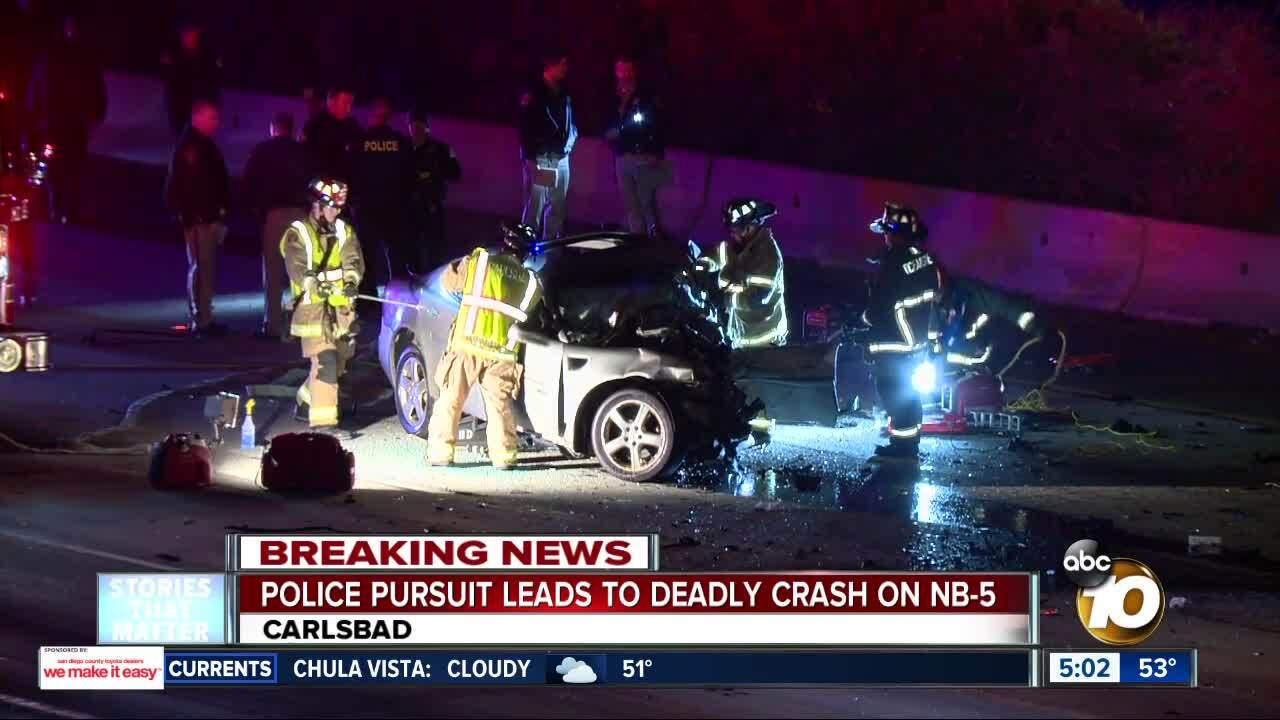 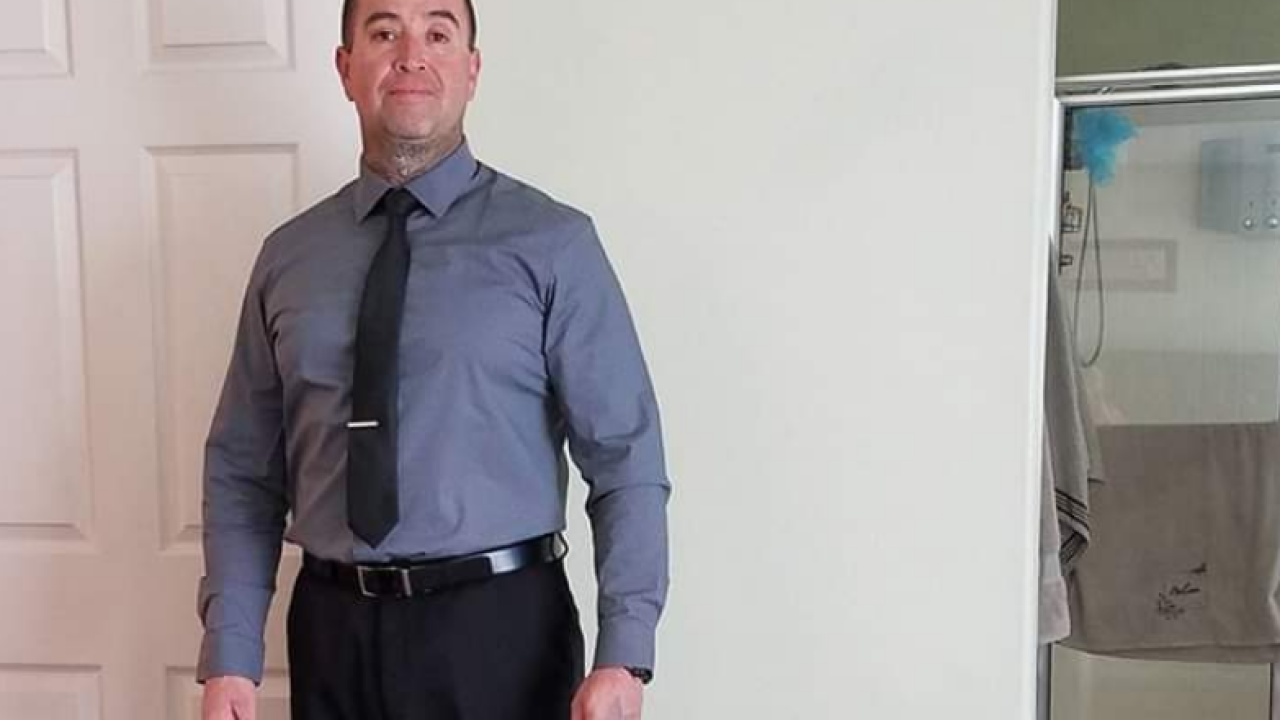 SAN DIEGO (KGTV) -- A suspect fleeing from officers and an innocent Camp Pendleton Marine were killed in an early-morning head-on crash following a chase on Interstate 5 in Carlsbad.

The pursuit began just after midnight Tuesday when officers attempted to stop a motorist driving a dark-colored F-150 truck for a speeding and failing to signal a turn on Coast Highway turning onto Monterey Dr.

When officers got to the door of the truck, the suspect took off on Carmelo Drive near Harbor Drive in Oceanside. The suspect's wife tells 10News Christian Zurita is the man who led police on the chase.

Zurita was reported traveling at speeds of up to 100 mph, and sometimes driving the wrong way on the freeway, police said.

About 10 minutes into the chase, the truck entered the northbound lanes in the wrong direction near the Las Flores bridge trying to evade police.

Oceanside Police Department officers did not pursue the truck because it was going the wrong way on the highway, traveling southbound in the northbound lanes, according to investigators. Instead, officers tracked Zurita with the help of a San Diego County Sheriff's Office helicopter.

OPD says at some point, Zurita turned off his lights. Moments later, he slammed his truck head-on into a light-colored Pontiac Grand Prix that was traveling in the northbound lanes.

Officers approached the truck, breaking out the windows, and deploying a K9. A male passenger in the F-150 was pulled from the wreckage and rushed to Scripps La Jolla Hospital.

Investigators said the victim in the Pontiac, a 19-year-old Camp Pendleton Marine, was pronounced dead at the scene. His identity hasn't been released at this time.

All I-5 lanes near the crash were closed for several hours during investigation. California Highway Patrol officials reopened the highway just before 6 a.m.

Zurita was a father of seven, his wife says.

"He probably panicked because he's scared of police and getting shot and doesn't like police encounters," Melissa said when asked why she believes her husband ran from authorities.

Zurita's cousin, Andy Ballon, sent 10News a statement on the behalf of the family:

"We hurt and mourn for all the loss today. We are in shock. Our sincerest condolences to the young Marine and his family. Our heart breaks for their family. Christian was a great person, father, and husband with some struggles. We do not want this tragedy to be in vain, if anyone is struggling, get help, there are many resources and organizations available to assist. Our family is broken..."

GET TRAFFIC UPDATES ON THE 10NEWS TRAFFIC MAP

STAY WITH 10NEWS FOR UPDATES ON THIS DEVELOPING STORY.