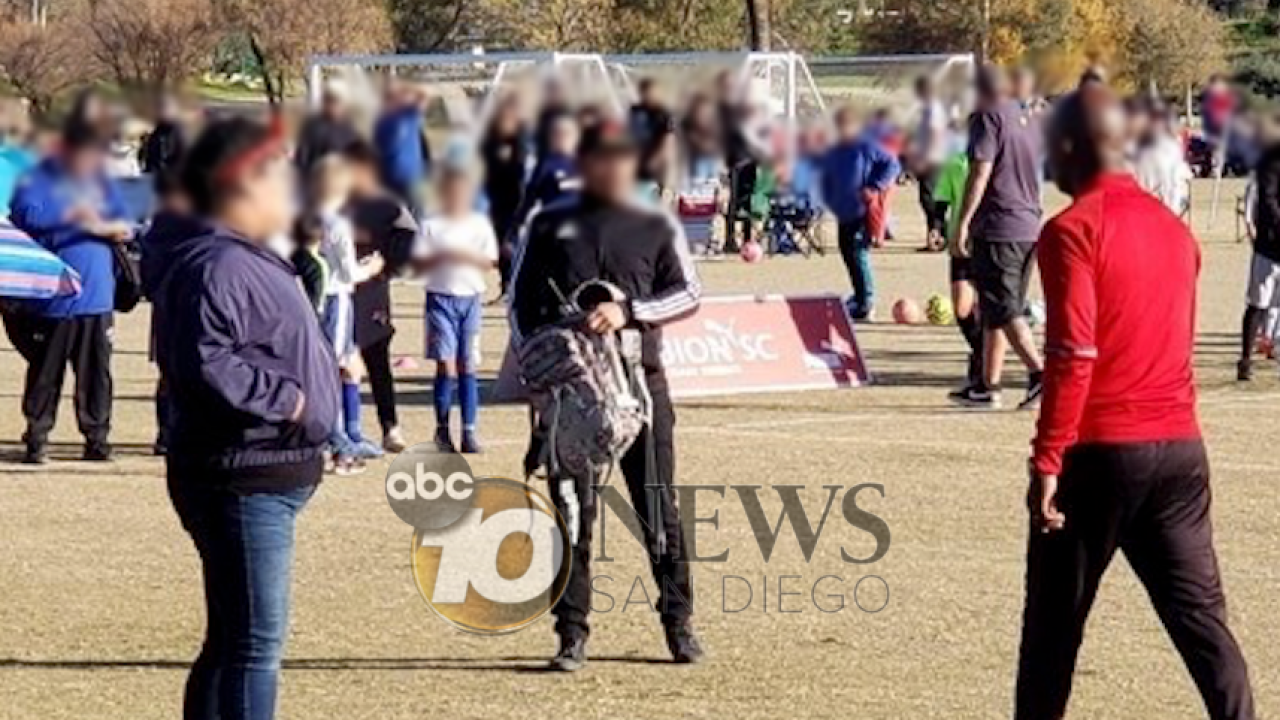 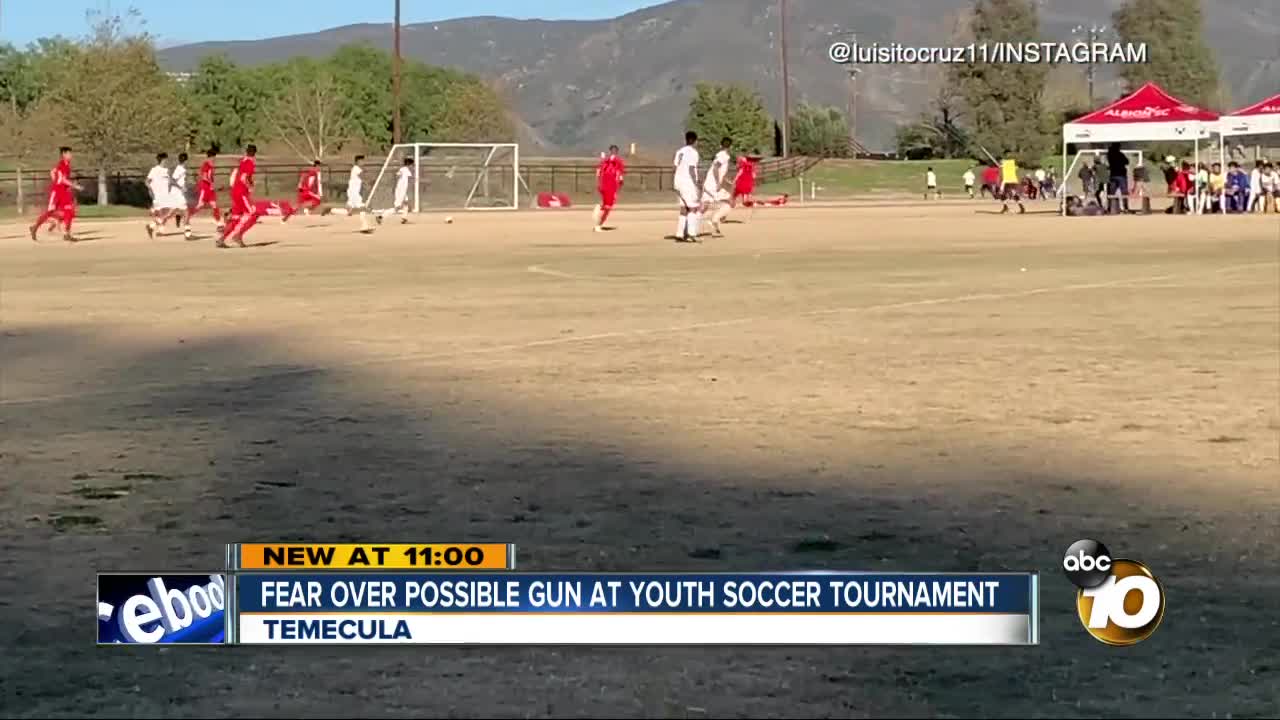 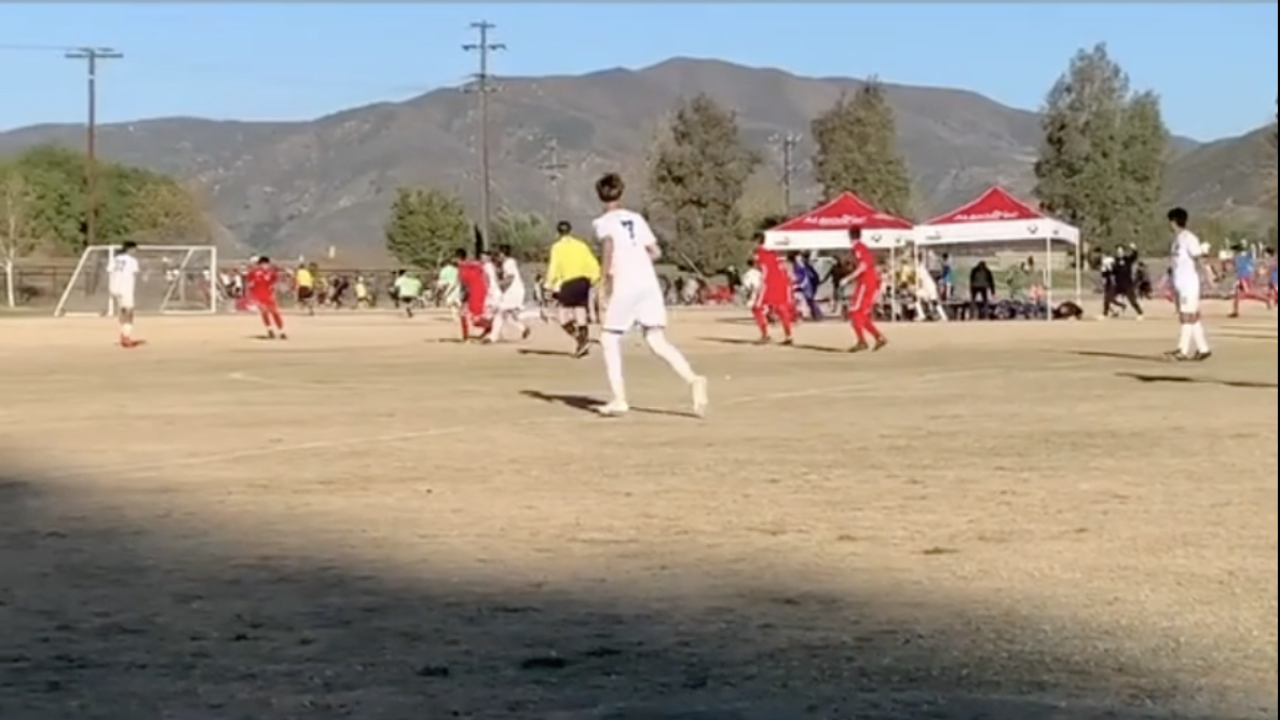 TEMECULA, Calif. (KGTV) - Chaos erupted in the middle of a youth soccer tournament in Temecula Sunday evening after reports that someone allegedly pulled out a gun during a confrontation with other spectators, witnesses and the CEO of the tournament told 10News.

10News has learned that one of the teams is from Chula Vista.

Players from opposing teams began shoving each other during one of the finals matches, one parent said. A family member then stepped onto the field and punched one of the players.

"There was a lot of fouls going on and I could see it was heating up," spectator Robert Hernandez said. "So one of the brothers from the Albion team rushed onto the field and just cold-cocked one of the other opposing players and this kid was about three years older."

Hernandez said the breach onto the field incited more than a dozen men to join in, creating a brawl. He said, at one point, a man walked away from the scrum and grabbed a camouflage backpack.

"The entire field was just rushing out to the sidelines, kids were running, crying, parents were pulling their kids, dragging them," spectator Robert Hernandez said. He was on the sidelines waiting for his niece to play in the finals.

Word of the melee quickly spread across multiple fields where teams, ages 8 to 15 years old, began sprinting off the fields.

"Someone's telling him don't do it, don't do it... They're right in front of us and we're like what's going on? And we're like this guy must have a weapon," he said. The same thought echoed through the crowd, inciting screams and sending kids running.

The father of the player that was punched to the ground told 10News that the boy is a 10-year-old from Otay Ranch. He says the spectator that ran onto the field and struck his son is from the Los Angeles-based Azteca Soccer Club, not the Chula Vista Albion team.

The father said his son sustained a minor head injury as a result of the attack. He described the assailant as being a possible teenager.

Referee Alex Hansen was on another field and saw the stampede. "At first, I thought it was actually a bee swarm and so I thought we were going to hit the deck or something, but everyone kept saying, 'Shooter! Shooter! Run!' So we just had to run to the parking lot," Hansen said.

He was immediately concerned about his 15-year-old brother who was refereeing near the commotion. He found out later his brother and players were hiding in a neighbor's garage.

He said the kids were distraught, crying and asking for their parents. Witness accounts on social media reported that some players were temporarily separated from their parents causing more alarm.

One of the players at the tournament, Luis Cruz, from Los Angeles, was on the field about 10 minutes into his championship match when the commotion began. He told 10News he was playing a few fields away but was able to hear the screams and saw people running. That's when he ran for safety.

"Everyone screamed 'run' and our coaches told us to just run and jump," he told 10News. "We all did and ended up on the other side of the fence huddled in the bushes with our coach and the team we were playing against.

Hernandez said he never saw a weapon, but the man was detained by Temecula Sheriff's Deputies for a short time.

The CEO of the Albion Development Showcase, Noah Gins, said the person that breached the field was a brother of the opposing team from Los Angeles who hit the Albion player.

Gins said deputies never found a weapon and in his 40 years of experience he's never seen anything like this. He said he spoke with California State Soccer Association South and wants stronger consequences for anyone who goes onto the field to discourage this kind of behavior.

Hernandez, a former coach, hopes parents reel in their enthusiasm at games, "Some of these parents get really emotional, they need to know it's just a game. They're out there to support their kids, their family member."

Temecula Police Department officials are still investigating the incident. Calls to the agency have not been returned at this time.