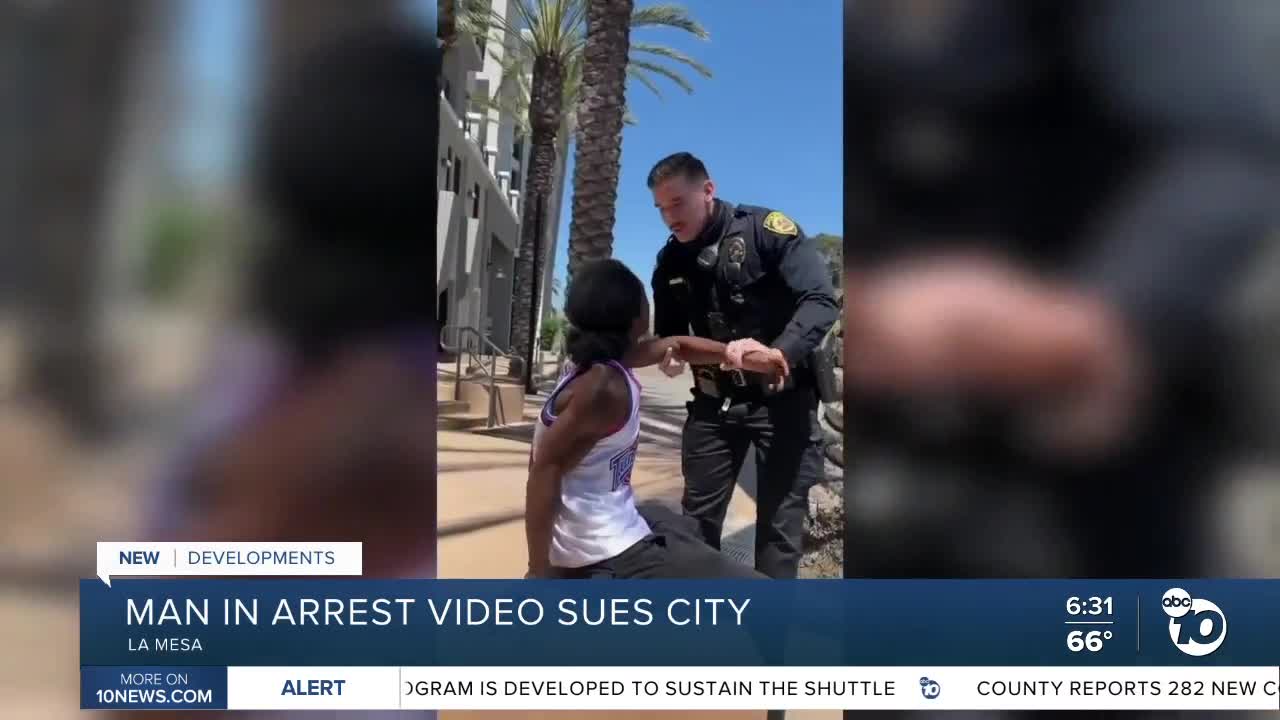 Amaurie Johnson, the man seen in a controversial arrest video, is suing the city of La Mesa and police department.

LA MESA, Calif. (KGTV) -- The man caught on video being arrested outside a La Mesa trolley stop has filed a lawsuit against the City of La Mesa.

The lawsuit was filed by Amaurie Johnson against the City of La Mesa, Matt Dages, and six John Does.

The lawsuit alleges arrest without a probable cause, negligence, excessive force, and violence because of race.

The suit comes after viral video showed Johnson’s controversial arrest outside a La Mesa trolley stop in June. In the video, an officer is seen pushing Johnson into a sitting position on a bench. Eventually, Johnson is handcuffed and told he is being arrested for assaulting an officer.

The La Mesa Police Department announced later in June that it had dropped charges against Johnson.

“After a full review of all of the evidence in the criminal investigation" against Johnson, the police department will not seek prosecution "on any of the alleged misdemeanor charges,” La Mesa Chief of Police Walt Vasquez said.

"We do believe that the officer should be investigated for potential criminal liability, but there is also a civil aspect to this. Mr. Johnson and I are discussing our options as far as moving forward with a complaint with the city of la mesa and potentially taking this to state or federal court," Johnson's attorney Troy Owens said in a previous news release.

Troy Owens, Johnson's attorney, told ABC 10News, "Mr. Johnson does not feel that his situation or his experience is unique. And we're seeing a pattern of behavior specifically coming from the City of La Mesa and the La Mesa police department, and that is upsetting to everyone."

Owens added, "The City of La Mesa pledged transparency and pledged accountability, and we are seeing the exact opposite of that. We're seeing closed investigations. We're seeing no action being taken we're not being given any information, and it's upsetting ... It appears as though law enforcement in the City of La Mesa is not calming down, it appears as though they escalated instead of de-escalating situations, and that is concerning."

"We're being given the runaround, and we're tired of that. So we just want some some candor. We want transparency. We want accountability, and we want change," Owens said.