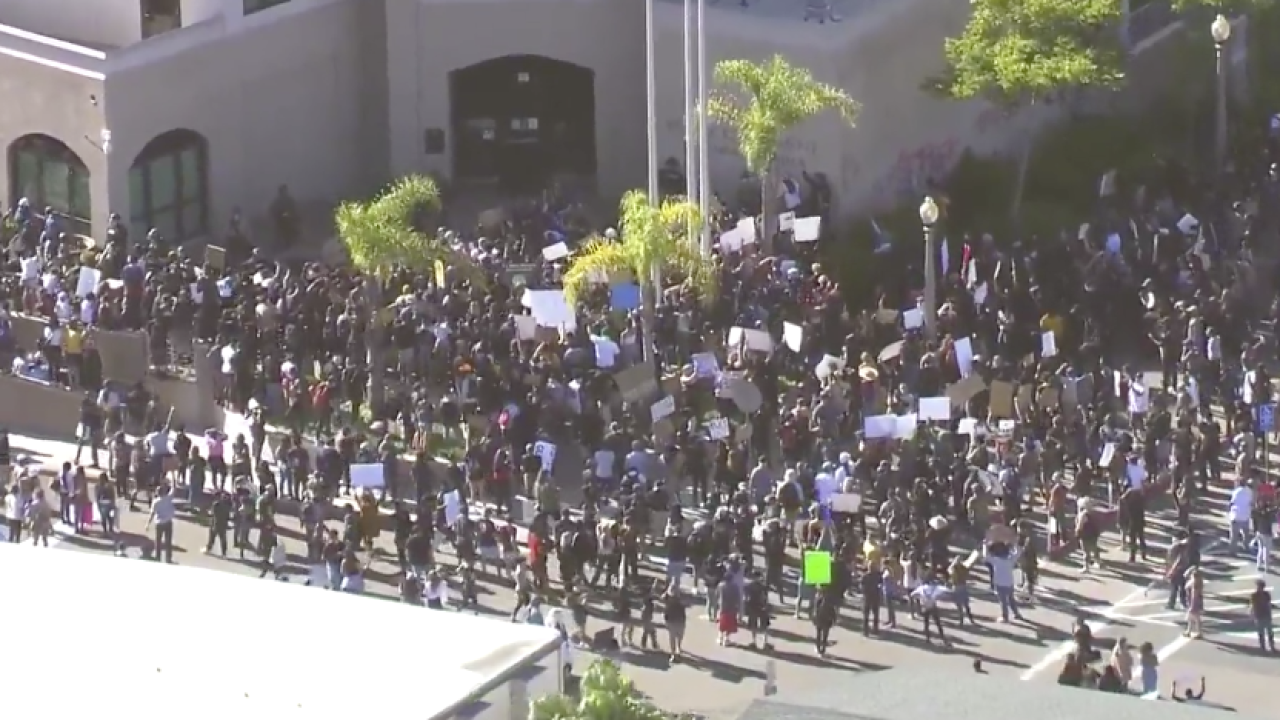 LA MESA (KGTV) - A large crowd descended on the La Mesa Police Department headquarters Sunday afternoon for a motorcycle Unity Ride and peaceful protest against police use of excessive force on people of color.

"We wanted to come together and support the community as one... As one!" one motorcycle rider said into the crowd.

"La Mesa Strong!" Charley and Lindy Tyler said. "We love La Mesa. We love our town. All Lives Matter, which means Black Lives Matter." The couple lives in the area and saw first hand the destruction by the rioters and looters two weekends ago.

Last month, La Mesa was the epicenter of San Diego County's local protests which saw violent clashes between protesters and police, mirroring images of the destructive unrest across the nation ignited by the May 26 death of George Floyd. Floyd, a black man, died after a Minneapolis police officer knelt on his neck for nearly nine minutes.

La Mesa was the focus of local protests after witness cell phone video surfaced showing the May 27 incident between Amaurie Johnson, a young black man, and a white La Mesa Police officer at the Grossmont Trolley Station on Fletcher Parkway.

The officer is seen pushing Johnson into a sitting position onto a bench. Eventually, Johnson is handcuffed and told he is being charged with assaulting an officer.

Charges against Amaurie Johnson have since been dropped.

Against a backdrop of fiery Black Lives Matter protests spreading across the country, Johnson's arrest and witness video led to protests against the LMPD that Friday and Saturday.

Leslie Furcron, 59, one of hundreds of protesters rallying outside the police department on May 30, was shot in the face with a bean bag round by a La Mesa Police officer. She was placed in a medically induced coma with a breathing tube. Furcron was released from the hospital June 9.

"What we saw were rogue and thug officers on Saturday," protest and Unity Ride organizer, Tasha Williamson said Sunday.

"The demands that we ask for, they're not demands that we will negotiate," Williamson said. "Meet our demands on what you did to our people. But also talk to La Mesa about how they want to be policed."

The La Mesa rally was one of several on Sunday. A "Baby's First Black Lives Matter Protest" took place at Spreckles Park. That one was billed as a peaceful demonstration for families with children of all ages. Rally included activism storytime.

At noon, a protest featuring music, dancing, and "Voices of black motherhood" took in Pacific Beach at Crystal Pier.

In the South Bay, demonstrators gathered at Veteran's Park on 8th Street in Imperial Beach.