Officials say Joseph DeAngelo, 72, graduated from the training center after attending from October to December of 1964.

DeAngelo also served aboard the Boston-class guided-missile cruiser USS Canberra (pictured below) during the Vietnam War. 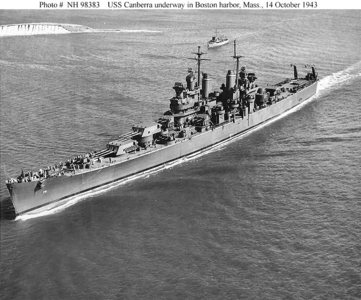 The Naval Training Center closed in 1997 and is now known as Liberty Station.

The San Diego's District Attorney is also reexamining cold cases in San Diego that may have links to DeAngelo.

New information Thursday also helps paint the picture of how authorities were able to catch the man accused of killing at least 12 people and raping at least 45 women.

Prosecutors say authorities used genealogical sites to find a DNA match for DeAngelo, according to the Associated Press.

Investigators compared the DNA collected from a crime scene of the Golden State killer to online genetic profiles and found a match: A relative of DeAngelo.

Investigators didn't go into further detail such as which company they went through.

DeAngelo is accused of committing the murders, rapes and more than 120 burglaries in the decade spanning between 1976 and 1986.

Most of the crimes happened near Sacramento and in the Bay Area.