SAN DIEGO (KGTV) - SDG&E has gained full control of a gas leak that prompted evacuations and shut down SR-163 and Friars Road throughout the day Wednesday.

All evacuations were lifted and roadways in the area reopened just before 8 p.m. following daylong evacuations and closures.

Crews said they would begin assessing damage and working to fix the gas line overnight Wednesday.

UPDATE - SR-163 both NB and SB between I-805 and I-8, including all ramps and connectors, have been reopened to traffic. #SDCaltransAlert

The natural gas main break, at Ulric Street and Friars Road, was reported just before 11 a.m. The break in the 22-inch line was reportedly caused by a construction crew, according to the utility company.

SDG&E estimated the fix would take at least four hours. Officials said they were waiting for the gas line to "bleed out" to alleviate pressure in the line.

No injuries as a result of the leak have been reported.

One of the elementary schools in the area, Fletcher Elementary, said the gas leak affected pick-ups and that roughly 20 to 30 children were picked up several hours late due to the leak.

Similarly, The Vine Infant Center said they had to evacuate to Linda Vista due to the gas leak and parents were delayed for about at hour. Employees of the daycare said they were unsure whether or not the business would be up and running Thursday.

As a result of the leak, traffic was backed up throughout Mission Valley all day Wednesday. Watch a Facebook live of the traffic in the player below:

California Highway Patrol closed southbound and northbound State Route 163 from Interstate 805 to I-8 as crews worked to fix the break.

Closures were also issued for Genesee Ave. and Mesa College Dr. onramps to southbound SR-163, and westbound and eastbound I-8 ramps to northbound SR-163.

MTS advised riders to expect delays for Rapid Express Routes and that Routes 280 and 290 will serve all stops, but will use other northbound and southbound freeways.

Click on the map below to see all of SDG&E's gas transmission pipelines and high pressure gas distribution mains throughout San Diego. 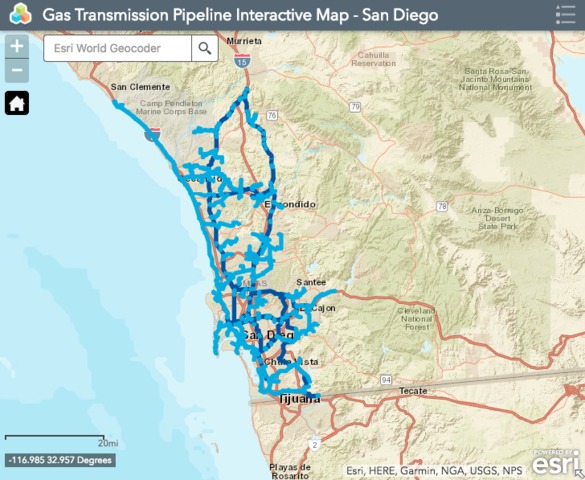