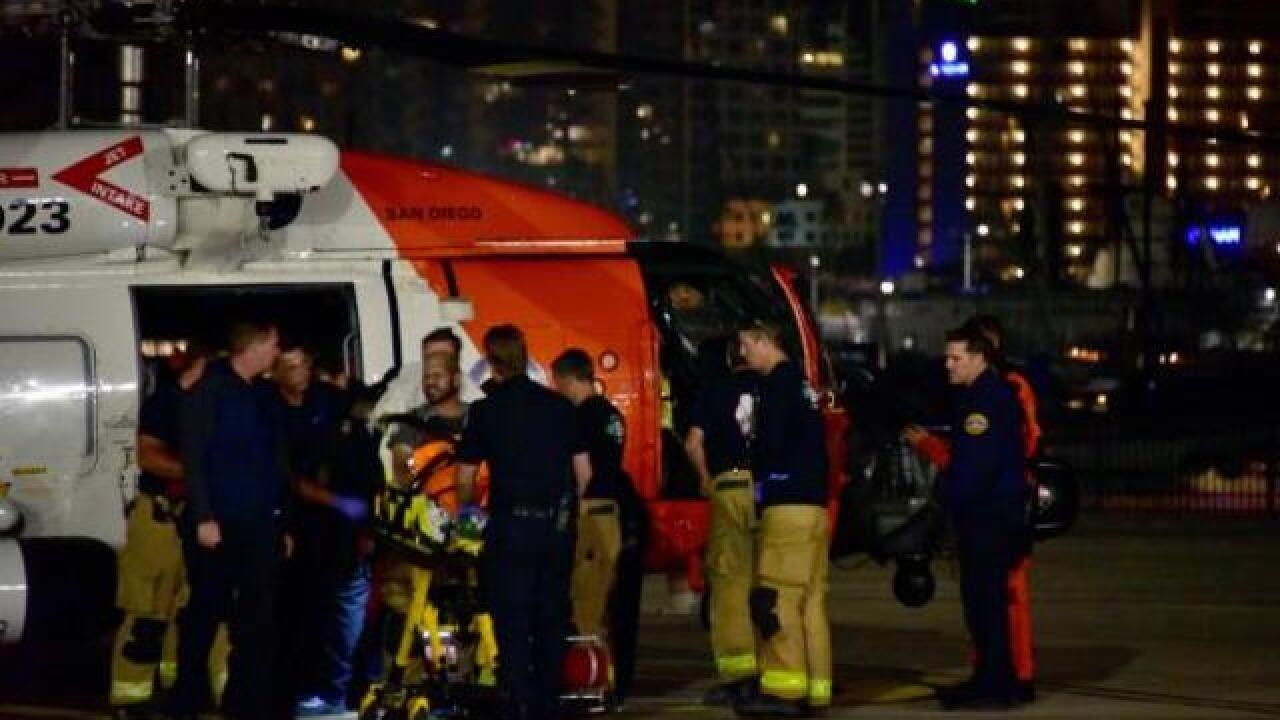 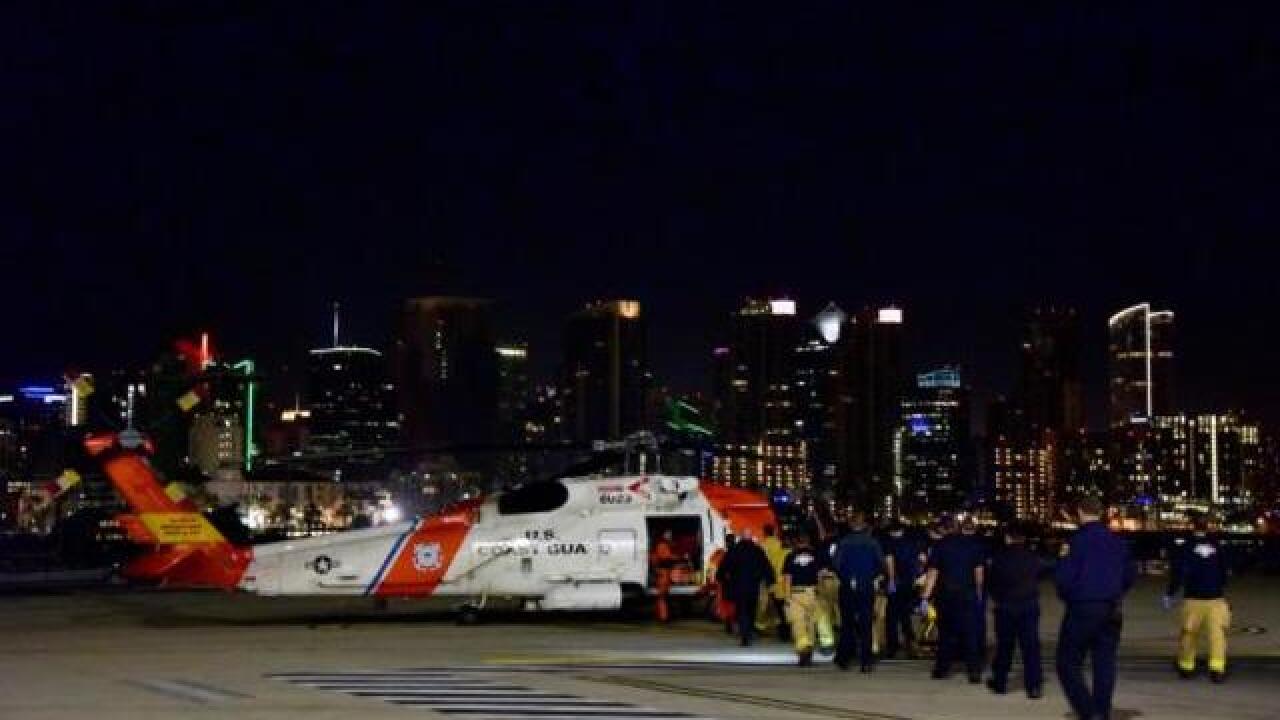 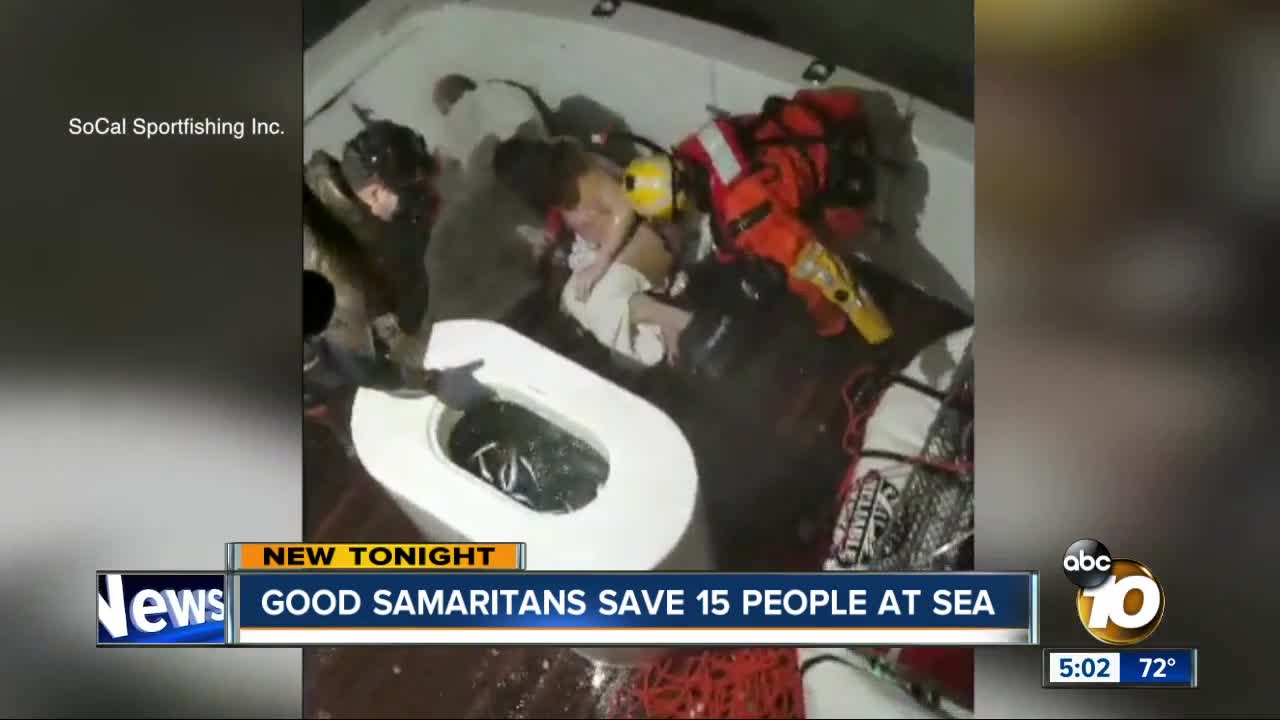 SAN DIEGO (KGTV) -- The Coast Guard is searching for three people after a fishing vessel caught fire Saturday night, sending two people to the hospital and leading to the rescue of 15 more.

According to the Coast Guard, the crew of a 42-foot fishing vessel named “Time Machine” called to report seeing a fire at 9:35 p.m. 28 miles south of Point Loma. The good Samaritans aboard the boat were able to pull 15 people out of the water, including two who were injured.

10News spoke to the captain and crew of "Time Machine."

Captain Mike Koesterer and his crew were on their way back into San Deigo from a fishing trip in Baja California when he saw an explosion in international waters.

"I saw an orange flash," he said. For the next 20 minutes, he drove his vessel closer to the ball of fire. The next thing he saw will be etched in his mind forever.

In the water, he and his crew witnessed 15 people screaming for help. Some had life vests. Others were wading. That's when his son Reeve changed into his diving suit and jumped in to help.

“I knew there were going to be burns, but I didn’t think it would be that bad,” Reeve Koesterer said.

He first pulled up a woman without a life vest. She desperately grabbed his hair and used Koesterer as a floatation device. The next few rescues were a blur. One by one, he carried and pulled the burn victims onto the "Time Machine."

During the rescue, one of the victims told Reeve Koesterer that this was part of a human smuggling operation.

“Do whatever we can to get them out of the water. No matter what the case is. They’re still lives,” Reeve Koesterer said.

Andy Vo is usually responsible for shooting and editing fishing videos for the "Time Machine's" charter trips. Last night, he was also documenting the rescue on his phone. As the Koesterers were pulling people on board, Vo comforted the victims-- giving them blankets and coffee.

“People that we rescued. He called us angels," Vo said.

What are the odds that a fishing boat carrying Reeve Koesterer--  a young, bilingual English Spanish speaker, expert diver -- would be right there to save those lives? Koesterer believes perhaps it was divine intervention.
“It’s something from the Lord," Koesterer said. "If we weren’t there at the right time, then they wouldn’t be here now."

The Coast Guard responded by sending several boats and a helicopter to the scene, air lifting those who needed medical attention to the hospital.

The 13 remaining survivors aboard the fishing vessel were taken to Ensenada, Mexico. The Coast Guard is using a MH-65 Dolphin helicopter crew and the Coast Guard Cutter Haddock to search for the missing three people.