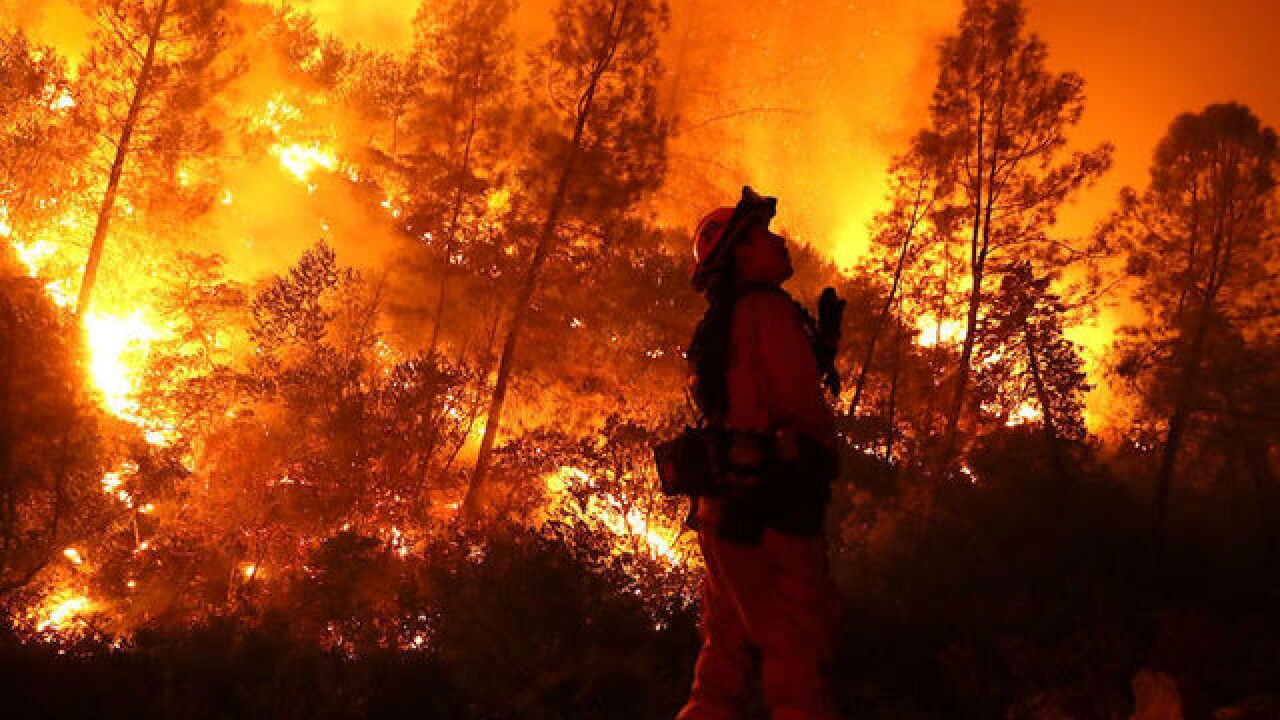 SACRAMENTO, Calif. (AP) — A firefighter battling the largest wildfire in California history was killed last month when thousands of gallons of flame-suppressing liquid were dropped from a Boeing 747 mistakenly flying only 100 feet (30 meters) above the treetops, according to an official report Friday.

The pilot and a supervisor flying ahead in a small guide plane led the giant modified jetliner nearly into the trees on Aug. 13 because the pilots failed to recognize that there was a hill in the flight path, according to the Green Sheet report by the state's firefighting agency.

Because of the near ground-level release, the retardant struck with such force it uprooted an 87-foot (27-meter) tree that fell on Matthew Burchett, a 42-year-old battalion chief from Utah helping with the Mendocino Complex Fire north of San Francisco.

Another large tree was snapped by the force of nearly 20,000 gallons (75,700 liters) of liquid and three firefighters were injured, one seriously.

The guide pilot "made a 'show me' run" for the 747 pilot over the intended path for the retardant drop, and marked the path for the jet with a smoke trail, according to the report.

"Obscured by heavy vegetation and unknown to the (747) pilot, a rise in elevation occurred along the flight path." The ground sloped up about 170 feet (50 meters) so quickly that the 747 cleared the hilltop in just two seconds, according to the report.

The guide planes have two people aboard, a pilot and an "air tactical supervisor." California Department of Forestry and Fire Protection spokesman Mike Mohler could not immediately say if either would face investigation or discipline for not identifying the hill.

RELATED: Verizon: 'We didn't live up to' promise to firefighters, apologizes for data caps

The retardant drops were intended to help secure a fire break cut through the trees by a bulldozer to stop advancing flames. Burchett and the other three firefighters were working on the hill next to the firebreak when the drop was announced over a radio and firefighters were told to "Clear the area out."

The four did not respond to the warning, though the report says that "when personnel are working under a tree canopy, supervisors must ensure the drop path is cleared."

It is not uncommon to have firefighters under retardant drops, Mohler said, though he could not say if the four firefighters knew they were in the flight path or why they didn't acknowledge or act on the radioed warning.

"We have ground troops under aircraft, it's not unusual at all. It's part of what we teach," he said.

A firefighter who can't move out of the way is trained to lie spread-eagled, face down, toward the oncoming aircraft, one hand holding the top of the helmet as it takes the brunt of the impact from the falling slurry and air turbulence that can threaten to lift a firefighter off the ground.

Burchett, a suburban Salt Lake City firefighter, was crushed by the uprooted tree, while the others were stuck by falling tree debris. Two had deep muscle contusions and ligament damage. One also suffered broken ribs, while the fourth firefighter had scratches and abrasions.

The report warns that some firefighters have used their cellphones to record retardant drops, which can be distracting and harm their ability to recognize the danger and take evasive action. But it does not say if any of the four injured firefighters was taking video at the time.