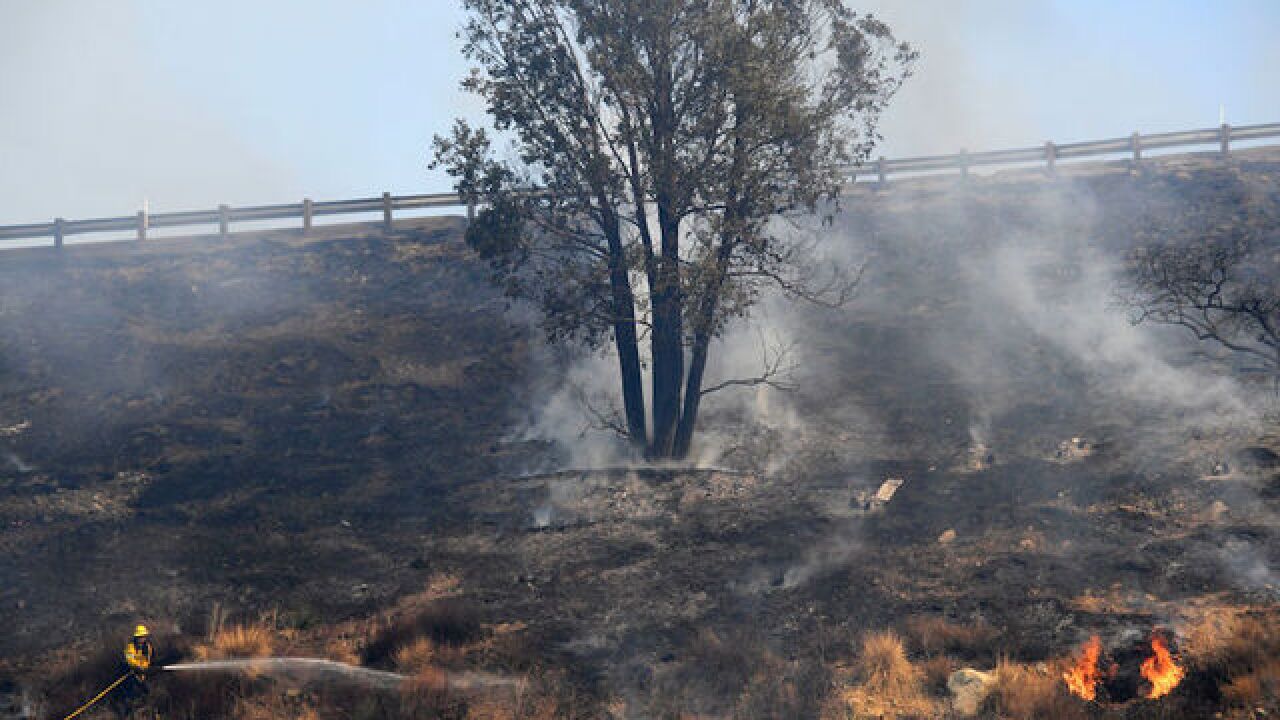 Image copyright 2018 Getty Images. All rights reserved. This material may not be published, broadcast, rewritten, or redistributed.
Kevork Djansezian
<p>Firefighters put out hotspots as the Peak Fire burns in the hills behind homes on November 12, 2018 in Simi Valley, California. Multiple fires are burning throughout the state claiming dozens of lives and hundreds of structures. </p>

LOS ANGELES (AP) — Southern California residents faced with the loss of lives and homes in a huge wildfire also are grappling with the destruction of a vast swath of public lands that are popular destinations for hikers, horseback riders and mountain bikers.

The Woolsey Fire has charred more than 83 percent of National Park Service land within the Santa Monica Mountains National Recreation Area, where officials announced Wednesday that all trails were closed.

"We understand that folks are curious about how their favorite park spots fared. We promise to share that ASAP," the park service tweeted, warning that the blaze was still active after burning for nearly a week.

The fire broke out Nov. 8 and quickly became one of the largest and most destructive in state history. Firefighters have made steady progress this week, getting it more than halfway contained, but warned many hotspots remain.

A massive burn scar encompasses more than 30 square miles (80 square kilometers) within the recreation area that stretches from beaches to inland mountains straddling Los Angeles and Ventura counties. It's the largest urban national park in the nation, with more than 30 million visitors every year.

Cyril Jay-Rayon, 52, watched the news with despair as flames engulfed what he called his "main playground" — a rugged area where he rode his mountain bike a few times a week. It includes the famous Backbone Trail, a 65-mile (104-kilometer) route that offers challenging terrain for bikers and hikers who are rewarded with soaring views of the Pacific Ocean.

"It's just devastating. Those trails are my sanity. It's where I ground myself," he said. "I love the city, but I also love how easy it is to get out into the wild."

People share their recreation areas with wildlife, including 13 mountain lions tracked by biologists via GPS collars. Park officials said two of the big cats were unaccounted for. Four monitored bobcats also were believed to have survived, but their habitats were burned, the park service said.

While the damage was still being assessed, officials confirmed that Paramount Ranch's "Western Town," a landmark film location dating to 1927 that included a jail, hotel and saloon, burned to the ground. The TV shows "Westworld," ''The Mentalist" and "Dr. Quinn, Medicine Woman" were among the productions that shot there.

Officials took the loss of the film location especially hard, because it was a unique feature among all the national parks.

"It's so special to share the story of moviemaking that came out of Southern California," recreation area spokeswoman Kate Kuykendall said. "We're the only National Park Service site that interprets American film history."

There's been an outpouring of public support for rebuilding the site, she said, adding that at least three homes of park employees were gutted.

The fire also destroyed much of nearby Peter Strauss Ranch, which hosted performances by Johnny Cash and Willie Nelson in the 1950s and more recently was a wedding destination.

Jay-Rayon, 52, said customers at the sports nutrition store he owns were coming to terms with the fact that it could be months or longer before they can ride or hike in their favorite wilderness areas again.

Also charred was Cheeseboro Canyon, former ranchland featuring trails through rolling grasslands against the backdrop of peaks and canyons. After winter and spring rains, the area is awash in green, but vegetation quickly dries in the persistent sun, fading to yellow and then brown. Grasses and other plants were brittle in the weeks before the fire started.

About 15 percent of the Santa Monica Mountains National Recreation Area is National Park Service land. The remainder is made up of private property, California State Parks and other conservation lands.