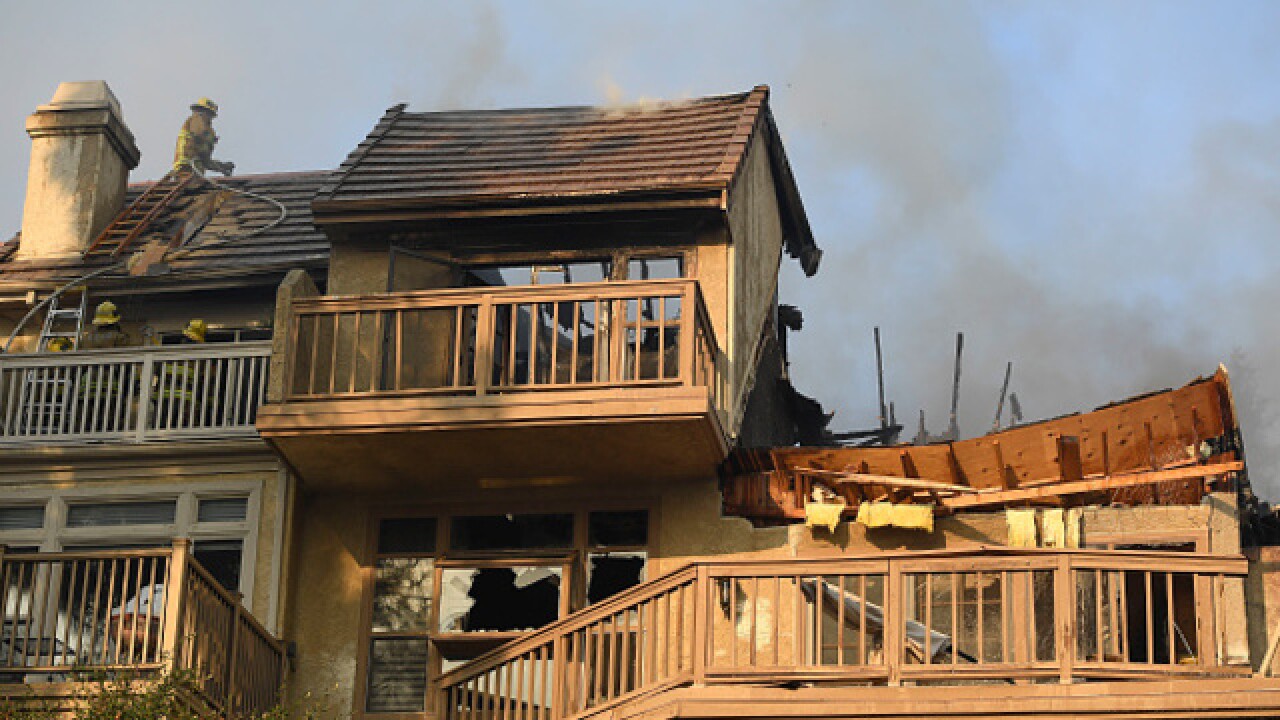 Copyright 2018 Scripps Media, Inc. All rights reserved. This material may not be published, broadcast, rewritten, or redistributed.
Kevork Djansezian
<p>WESTLAKE VILLAGE, CA - NOVEMBER 09: Los Angeles City firefighter put out hot spots in a condominium complex damaged by Woolsey fire on November 9, 2018 in Westlake Village, California. About 75,000 homes have been evacuated in Los Angeles and Ventura counties due to two fires in the region. (Photo by Kevork Djansezian/Getty Images)</p>

MALIBU (CNS) - More evacuation orders were lifted in the Malibu area as residents expressed frustration Friday with the slow pace of repopulating evacuated areas because of road closures, and containment of the 9-day-old Woolsey Fire grew to 69 percent as the number of structures destroyed increased to more than 600.

Lee O'Keefe was evacuated and stayed at her mother's home in Newport Beach and returned to Malibu after learning Thursday the evacuation order for her Corral Canyon neighborhood had been lifted, but she was still not able to return home.

``I keep turning around, turning around because there's no reception on the phones,'' O'Keefe told ABC7. ``I know they're doing the best they can. Everybody is trying to keep everybody safe."

``Folks are out there working diligently to make sure all the properties that were damaged and also destroyed, that there are no hot spots so that when we do repopulate you that your safety is our utmost importance,'' Los Angeles County Fire Department Battalion Chief Mike Inman said Thursday night.

Fire officials warned people returning to their homes to beware of changing fire conditions and adhere to road closures and shifting evacuation zones.

``Burned out power poles, burned and damaged homes, debris-filled roadways, broken gas lines and burned guard rails pose serious safety hazards to residents attempting to return to the area,'' according to a statement from fire officials.... The Woolsey Fire is unlike any previous fire in the Santa
Monica Mountains due to the vast destruction and devastation to homes and
critical infrastructure.''

Firefighters hope to take advantage of weaker winds and increased humidity levels Friday to increase containment of the deadly Woolsey Fire, which has charred 98,362 acres and is 69 percent contained, with full containment expected Monday, but offshore Santa Ana winds of the kind that plagued the
region until late Wednesday afternoon are expected to return Sunday afternoon.

Since erupting last Thursday in Ventura County, the fire has destroyed 616 structures, damaged 157 others and threatened an additional 57,000 structures, according to the unified command overseeing the battle.

A firefighter from Washington state was injured early Thursday morning when he was struck by a vehicle, apparently while resting or sleeping at a camp area along Pacific Coast Highway near Dear Creek Road in Ventura County.

According to reports from the scene, the vehicle was driven by a person who lives in the area, and ran over the sleeping firefighter. The firefighter was taken to Los Robles Regional Medical Center in Thousand Oaks with injuries that authorities said were not life-threatening.

The firefighter is from South Kitsap Fire and Rescue in Washington state.

Gov. Jerry Brown and U.S. Interior Secretary Ryan Zinke met with fire commanders in Camarillo Thursday morning to get an assessment of the damage and the continuing firefight.

President Donald Trump -- who initially lashed out at California's forest-management policies as a cause of the destructive blazes -- will visit the state Saturday to ``meet with individuals impacted by the wildfires,'' according to White House Deputy Press Secretary Lindsay Walters.

The death toll from the fire rose to three on Wednesday, with the discovery of a charred body in a burned-out home in the 32000 block of Lobo Canyon Road near Agoura Hills. Family members said the victim was 73-year-old Alfred Deciutiis, a retired oncologist. His death has been listed by fire
officials as one of three deaths related to the fire.

The other two victims of the fire were found last Friday in a burned-out vehicle on a long driveway in the 33000 block of Mulholland Highway. Authorities said they suspect the driver became disoriented amid the flames.

Fire information for Los Angeles County can be found at www.lacounty.gov/woolseyfire. Malibu also has established a website to update fire information at www.malibucity.org/woolsey.