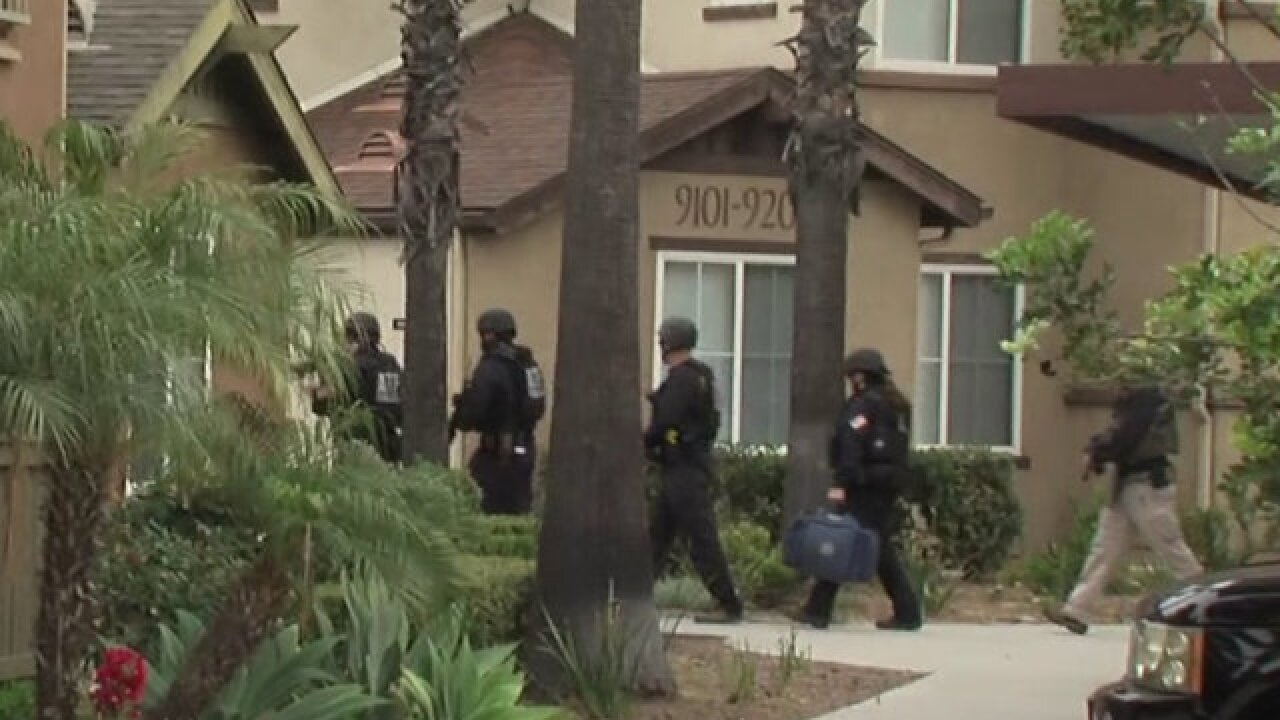 Shortly after 9 a.m., ATF agents and officers with the San Bruno Police Department -- with assistance from San Diego sheriff’s deputies -- entered a unit at the Dove Canyon Apartments in 4S Ranch.

An investigator at the scene told 10News no one was inside the unit at the time and there did not appear to be any useful evidence in the home. However, five bags containing unknown items were retrieved from the apartment.

A plastic bag full of clothes that had been thrown in a Dumpster on the apartment grounds was also taken by investigators.

Authorities were alerted to the bag by a woman who said she used to park her car next to Aghdam’s. She said she saw Aghdam throw the clear plastic bag into the Dumpster between 10 a.m. and 11 a.m. on Monday.

The woman described Aghdam as a very reserved person who often walked with her head down and was very shy -- a stark contrast to the flamboyant personality she presented on her YouTube channel.

As officers took away items, family friends and relatives stopped by and spoke to the media about Aghdam.

“She was a really good person. She was a vegan and animal-loving,” Aghdam’s aunt told reporters.

When asked if Aghdam had any history of mental illness, the aunt responded, “No, not at all.”

The aunt went on to say Aghdam had been angry with YouTube for the last year but did not elaborate further.

10News learned Aghdam often posted on her website, which had links to several YouTube channels she managed.

In her videos, she preached and rallied against animal cruelty.

On her website, she wrote that there were no equal growth opportunities on YouTube and complained about the company filtering her channels to keep them from getting views, which caused her to lose money.

Aghdam's family issued a statement expressing their shock and condolences:

"Our family is in absolute shack and can't make sense of what has happened yesterday. Although no words can describe our deep pain for this tragedy, our family would like to express their utmost regret, sorrow for what has happened to innocent victims. Our thoughts and prayers are with them and their families. We are praying for speedy recovery of their injured and ask God to bestow patience upon all persons hurt in this horrific senseless act. As our family struggles to cope with this chaotic situation we would like to kindly ask media to respect our family's privacy and we thank the authorities."

ATF officials issued a statement on the searches that were conducted Wednesday: "San Bruno Police Department obtained a search warrant that covers multiple locations in Southern California and multiple vehicles. ATF personnel are continuing to assist the PD in support of the YouTube headquarters shooting investigation."