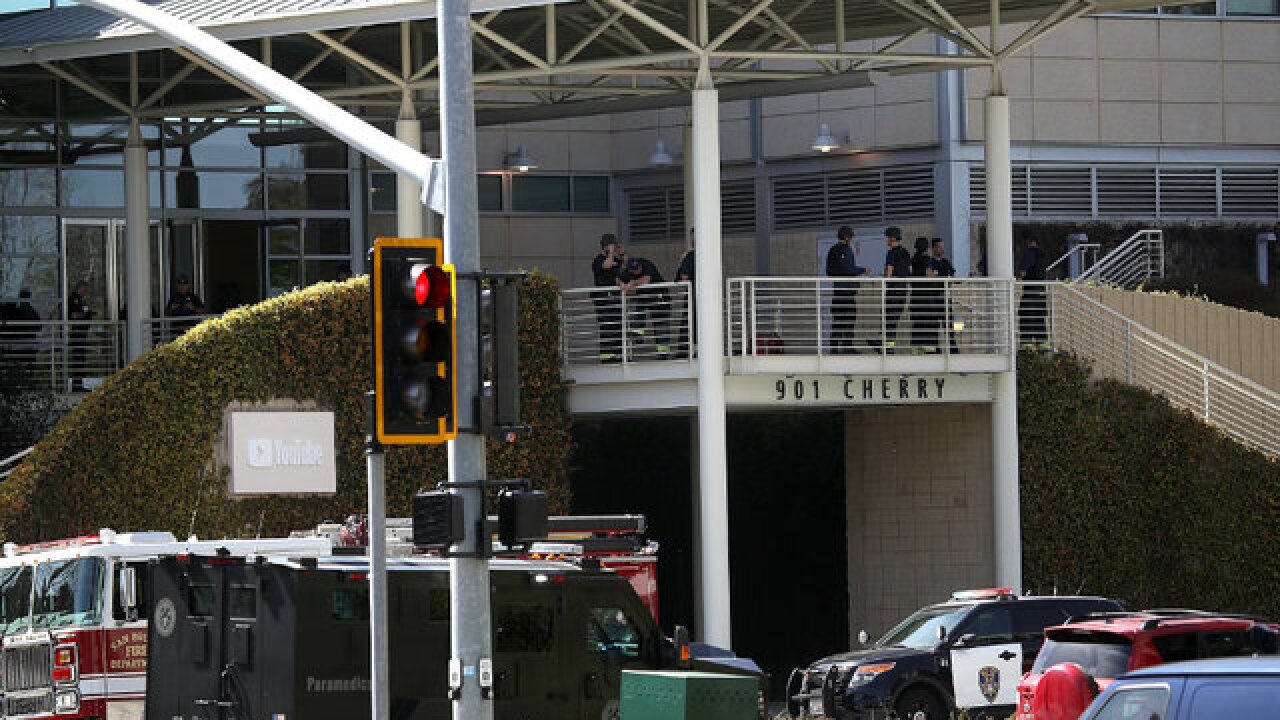 (KGTV) - Police said the San Diego woman who carried out a shooting at YouTube’s San Bruno headquarters Tuesday visited a Bay Area gun range hours before she made her way to the company’s campus.

San Bruno police Chief Ed Barberini said Wednesday that investigators believe 39-year-old Nasim Aghdam entered the YouTube campus at 901 Cherry Ave. through a parking garage and then entered the campus courtyard to carry out the shooting.

According to police, numerous 911 calls regarding multiple shots fired came pouring in at 12:46 p.m. Barberini said responding officers and fire crews were at the scene within two minutes and saw numerous people fleeing the building.

Aghdam was found dead in the courtyard from a self-inflicted gunshot wound, according to police. Four people -- three of them with gunshot wounds -- were hospitalized.

Barberini did not immediately say how many shots Aghdam fired but noted that it was “quite a few.”

No other suspects were located after a search of the campus by police and fire crews.

San Bruno Mayor Rico E. Medina said, “We had a crisis yesterday, and our hearts and prayers are with the victims and YouTube employees … I am thankful and appreciative of our law enforcement for taking action.”

As for a motive, police said they believe Aghdam may have been upset with YouTube’s policies and practices, but specific details on what may have angered her have not yet been determined by investigators.

Family members confirmed to 10News that Aghdam was angry with the company because its policy changes were costing her money and views on her YouTube channel.

Aghdam’s whereabouts before the shooting

According to officials, a deputy "completed a missing person's report per policy and entered her into the national Missing Person's database. The deputy then searched the area and conducted a preliminary investigation. When she was not found, the case was assigned to a detective. The Sheriff's Department is cooperating with the San Bruno Police Department and other agencies on this case. Our thoughts and prayers go to out to those who are injured, their families, the Aghdam family and all others who were impacted by this tragic event."

However, Barberini said Aghdam was located by police in the Bay Area city of Mountain View and she was removed from a missing persons database.

Mountain View police issued this statement regarding their interaction with Aghdam

“Around 1:40 am on Tuesday, April 3, Mountain View patrol officers proactively checked a license plate of a vehicle that was parked in a lot on the 600 block of Showers Drive. The license plate came back to a registered owner out of Southern California who had been reported missing on March 31 to the San Diego County Sheriff’s Office. We called the Sheriff’s Office to confirm the missing persons reports, and personnel there told us that in that report, the woman had been reported missing and ‘at risk’ because she had never gone missing or left home before. We contacted the woman inside the vehicle, who was asleep, to check on her and to determine if she was the same person who had been reported missing.

The woman, identified as 38-year-old Manifee resident Nasim Aghdam, positively identified herself to us and told us during our contact with her that she had decided to leave her family’s home a few days prior due to family issues. She stated she had come to the area to stay with family and while she was currently living out of her vehicle, she was in the process of looking for a job. During our contact with her, she was asked a series of questions including, but not limited to, if she was a danger to herself or others. At no point during our roughly 20-minute interaction with her did she mention anything about YouTube, if she was upset with them, or that she had planned to harm herself or others. Throughout our entire interaction with her, she was calm and cooperative.

At the conclusion of our interaction with her, she in no way met any reason for us to speak with her further or possibly detain her. A short time later, we phoned her family to let them know she had been located. During that call, we spoke with both the woman’s father and her brother. The father confirmed to us that the family had been having issues at home, but did not act in any way concerned about why his daughter had left. At no point during that conversation did either Aghdam’s father or brother make any statements regarding the woman’s potential threat to, or a possible attack on, the YouTube campus. Also, there was no indication from either Aghdam or her family that she may have been in possession of any weapons.

Roughly one hour after our phone call to Aghdam’s family, her father called us back to let us know that she made a series of vegan videos for her channel on YouTube and that the company had recently done something to her videos that had caused her to become upset. Aghdam’s father stated that she may have been in the area because of this. He did not seemed concerned that she was in the area, and wanted to simply let us know that may have been a reason for her move up here. Once again, at no point did her father or brother mention anything about potential acts of violence or a possibility of Aghdam lashing out as a result of her issues with her videos. They remained calm throughout this second phone call.”

Barberini said investigators learned Aghdam was at a local gun range prior to the shooting in San Bruno. The name and exact location of the gun range was not released.

The Smith & Wesson 9mm handgun recovered from the shooting scene was registered to her, according to Barberini.

When asked if his department was aware of Aghdam’s whereabouts before Tuesday's incident, Barberini said he did not know enough about what information was or wasn’t relayed to his department before the shooting.