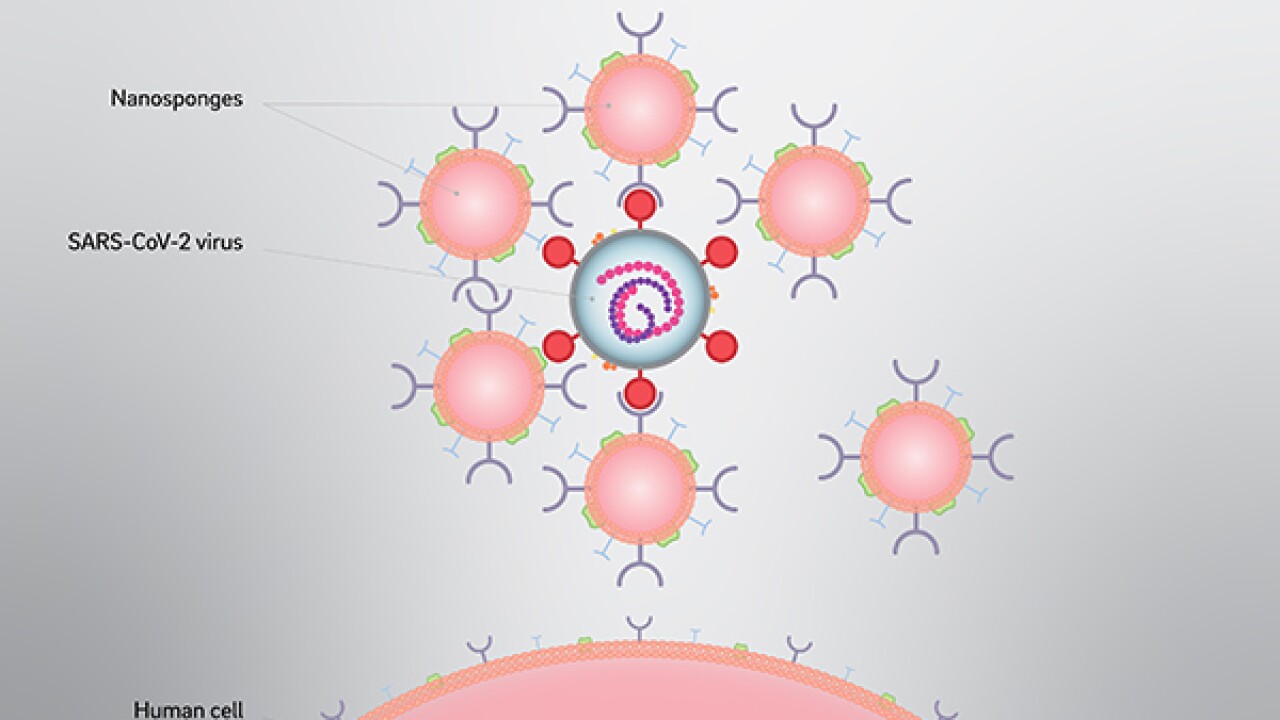 SAN DIEGO (KGTV) — UC San Diego researchers are testing a technology that's been in development for more than a decade to fight the coronavirus.

In lab experiments, "nanosponges" covered in human lung cell membranes and immune cell membranes were found to attract and neutralize the SARS-CoV-2 virus in cell culture, according to a UCSD release. This caused the virus to lose about 90% of infectivity, or its ability to hijack cells and reproduce.

The tiny sponges are designed to impersonate and protect healthy cells by soaking up harmful pathogens and toxins, according to Liangfang Zhang, a nanoengineering professor at the UC San Diego Jacobs School of Engineering.

For example, the nanoparticle covered in membranes from cell types the virus is known to invade latch on to the virus. This prevent the virus from then entering an actual human cell.

"Traditionally, drug developers for infectious diseases dive deep on the details of the pathogen in order to find druggable targets. Our approach is different. We only need to know what the target cells are. And then we aim to protect the targets by creating biomimetic decoys," said Zhang.

While Zhang has spent the last 10 years developing the technology, his lab turned to using the nano-particle to fight the coronavirus when the pandemic hit.

Now, the first data on the technology's ability to battle the virus is being released after testing by researchers at Boston University.

"Another interesting aspect of our approach is that even as SARS-CoV-2 mutates, as long as the virus can still invade the cells we are mimicking, our nanosponge approach should still work. I’m not sure this can be said for some of the vaccines and therapeutics that are currently being developed," said Zhang.

UCSD researchers will test the nanosponges’ effectiveness in animal models in the next few months and are moving as fast as possible to eventually test the technology in humans.

Nanosponges have a massive amount of testing ahead before they make it to human tests, Zhang said.

"I see potential for a preventive treatment, for a therapeutic that could be given early because once the nanosponges get in the lung, they can stay in the lung for some time," Zhang said. "If a virus comes, it could be blocked if there are nanosponges waiting for it."

(Read more about the study and nanosponges here.)