Lawsuits over face coverings: What to know about the ADA and rules for businesses 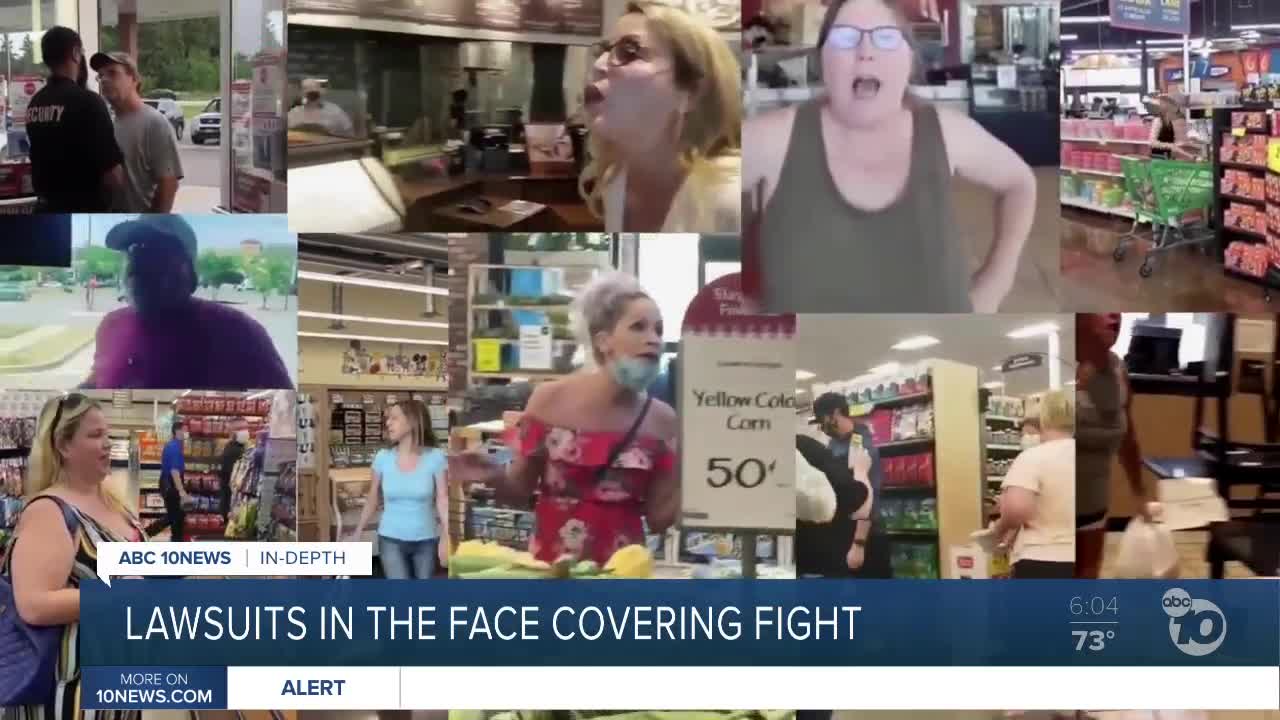 As more and more encounters over requiring facial coverings become public, 10News anchor Derek Staahl looks at the viability of lawsuits of the rules.

SAN DIEGO (KGTV) — From the confrontation in a Los Angeles Trader Joe's to a showdown in a San Diego Starbucks, there have been a lot of customers claiming businesses can't legally require them to wear a mask.

Some customers even carry a card threatening fines and citing the Americans with Disabilities Act, or ADA. But there are three things to consider before making an ADA claim, according to lawyers.

First, to bring a successful ADA lawsuit, attorneys say the person without a mask must truly have a disability. Businesses can ask if a person has a disability, but not much beyond that.

RELATED: Confrontation over wearing a mask at Coronado coffee shop

"You can't delve into someone's medical condition and ask them a bunch of questions," said attorney Colin Harrison. "I would not advise businesses to ask for any type of documentation."

If the person says they have a disability, the ADA requires businesses to make reasonable accommodation. So what's reasonable?

"A reasonable accommodation might be to ask the person to wear a face shield, which is about an inch and away and probably wouldn't restrict their ability to breathe," says attorney Steven Elia.

RELATED: GoFundMe started for San Diego barista after woman posts about not wearing mask at Starbucks

Elia says other accommodations might include curbside pickup, but the ADA has limits: businesses don't have to fundamentally alter the way they operate.

"Customer says I don't want to wear a mask, I want you to deliver to my home. If the business doesn't already provide delivery service, that would be a major fundamental alteration of their business, one they would not be required to do," Harrison said.

But what happens if those accommodations won't work? There's a third component in the ADA: Subsection 36.208 allows businesses to turn disabled people away if they pose a direct threat to the health and safety of others.

"Someone not wearing a mask, they might think they're not infected, but they could be and pose a direct threat to spread the virus to many people," Elia said.

The Equal Employment Opportunity Commission has said COVID-19 does constitute a direct threat, so our experts say the threat of a successful lawsuit in a case like this is low.

That said, there's nothing stopping people from filing these lawsuits. There have been at least nine across the country. But businesses that win can pursue legal fees from the other party.