Californians 16 and older eligible for COVID-19 vaccine on April 15, 50 and older on April 1

SAN DIEGO (KGTV) — California will expand its vaccine eligibility to residents 50 and older starting April 1 and to everyone 16 and older on April 15, Gov. Gavin Newsom announced Thursday.

Newsom, speaking during a press conference in Santa Ana, said the expansion is based on expected COVID-19 vaccine supply increases.

"With vaccine supply increasing and by expanding eligibility to more Californians, the light at the end of the tunnel continues to get brighter," said Newsom. "We remain focused on equity as we extend vaccine eligibility to those older than 50 starting April 1, and those older than 16 starting April 15. This is possible thanks to the leadership of the Biden-Harris Administration and the countless public health officials across the state who have stepped up to get shots into arms."

RELATED: In-Depth: Could increased vaccine eligibility make it harder to get vaccinated?

COVID-19 vaccine clinic volunteers will also be eligible for the vaccine if they complete at least one clinic shift and approval from the clinic’s organizer, the state added in its announcement.

Newsom attributed the earlier date to the expectation that vaccine supply would greatly increase in the next month. 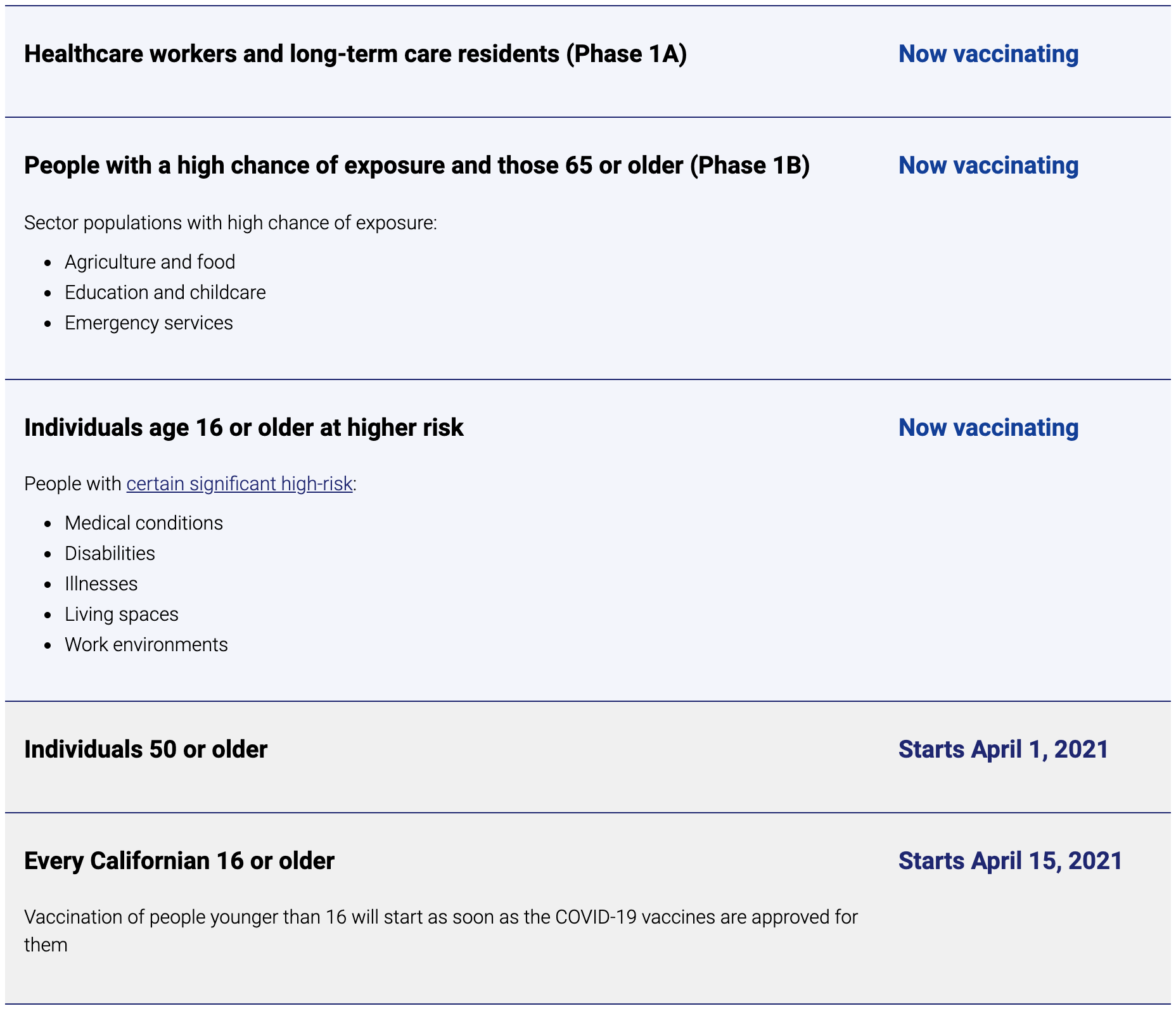 The state says, though, that even with the increase in supply, it will take "several months" to get all eligible Californians vaccinated. Newsom recommended all residents sign up on the state's MyTurn website to be notified of when they can get vaccinated.

See Gov. Newsom's announcement in the video below at the 12:50 mark:

"We are even closer to putting this pandemic behind us with today’s announcement and with vaccine supplies expected to increase dramatically in the months ahead," said California Health and Human Services Secretary Dr. Mark Ghaly. "However, we are not there yet. It will take time to vaccinate all eligible Californians. During this time, we must not let our guard down. It is important that we remain vigilant, continue to wear masks and follow public health guidance."

California officials say the state has the ability to administer more than 3 million vaccine doses per week and is building the capacity to administer 4 million doses weekly by the end of April.

However, the state will continue to double the number of vaccines allocated to those communities hardest-hit, as identified in the state's Healthy Places Index.