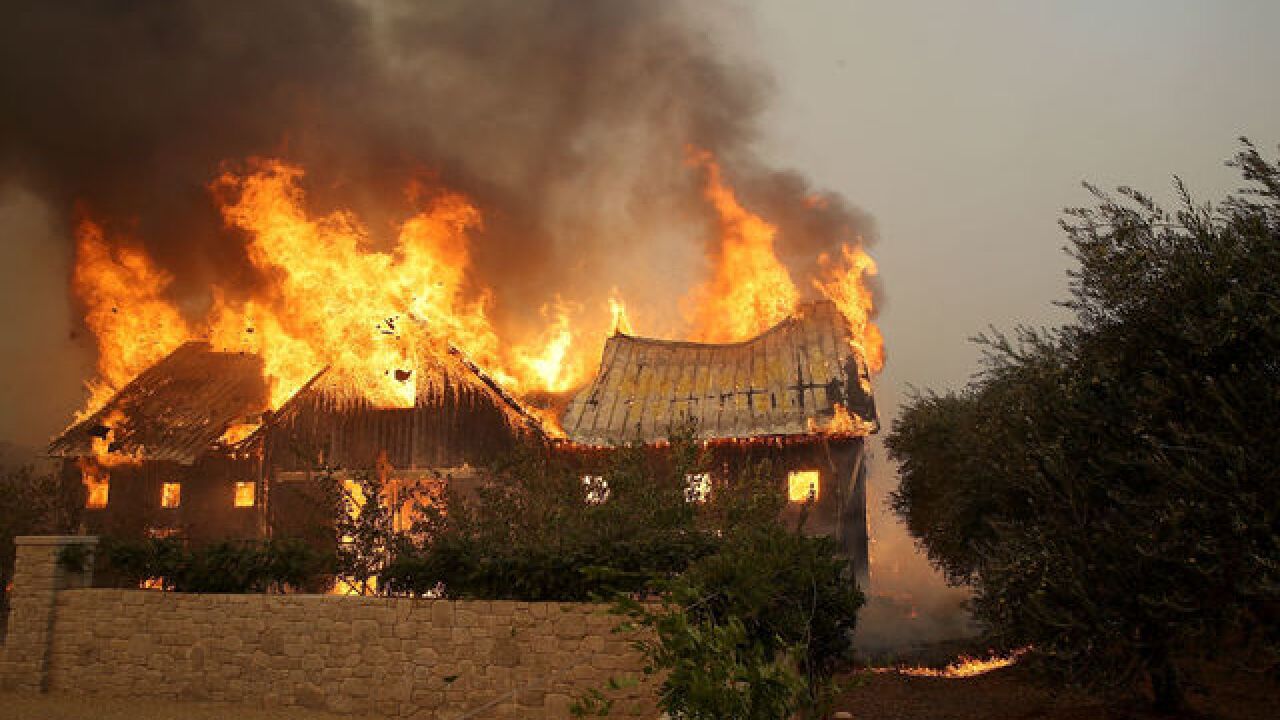 Copyright 2017 Scripps Media, Inc. All rights reserved. This material may not be published, broadcast, rewritten, or redistributed.
Justin Sullivan
GLEN ELLEN, CA - OCTOBER 09: Fire consumes a barn as an out of control wildfire moves through the area on October 9, 2017 in Glen Ellen, California. Tens of thousands of acres and dozens of homes and businesses have burned in widespread wildfires that are burning in Napa and Sonoma counties. (Photo by Justin Sullivan/Getty Images)

SAN FRANCISCO (AP) — State and federal authorities estimated Tuesday that it will cost at least $3 billion to clear debris from 19,000 homes and businesses destroyed by three California wildfires last month.

The disaster relief officials said the cleanup costs will far surpass the record cleanup expense of $1.3 billion the U.S. Army Corp of Engineers spent on debris removal in Northern California in 2017.

Ghilarducci said the state OES will hire auditors and monitors to watch over the debris removal in hopes of cutting down on the number of over-eager contractors.

He said the U.S. Corps of Engineers was asked to lead the effort last year because state resources were stretched thin after responding to more than a dozen wildfires. This year, he said state officials can manage the cleanup and costs will be shared among state, federal and local authorities.

He said he expects the cleanup to begin in January and take about a year to complete. State and federal officials are currently removing hazardous household materials from the damaged properties.

Most of the work will occur in Northern California, where the state's most destructive wildfire destroyed the city of Paradise.

The death toll from the Camp Fire stood at 86 on Tuesday, after the Butte County Sheriff's office said that a Paradise man had died of his burn injuries in a hospital nearly three weeks after the Nov. 8 blaze. The number of people on the unaccounted-for list remains at 3.

Insurance companies estimate the industry will face at least $10 billion in claims from homeowners and businesses destroyed or damaged in the latest wildfires.

California Insurance Commissioner said the carriers received $11.8 billion in claims because of the 2017 wine country fires.

Jones has warned increasing risk from wildfires in California could prompt insurers to raise premiums or decline to sell policies entirely to homes in high-risk areas.