Copyright 2018 Scripps Media, Inc. All rights reserved. This material may not be published, broadcast, rewritten, or redistributed.
Contributed: City of San Diego

A feasibility study, completed by engineering firm WSP USA, proposed a "skyway" to connect San Diego International Airport to the convention center could be built with current aerial cableway technology.

The study suggests the aerial cableway "has the potential to enhance mobility within the study area." The transit system could include intermediate stations at Santa Fe Depot, Seaport Village, the Embarcadero, and in the Marina District.

Riders would also be able to connect to MTS, Coaster, and Amtrak stations, the study says. 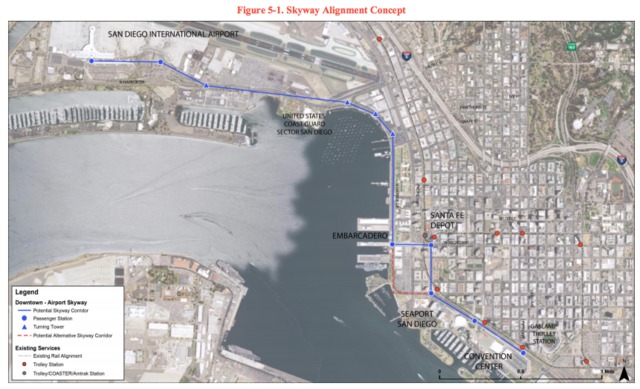 The study adds the skyway could make 1.1 million and 1.6 million trips a year, or about 3,600 to 4,900 trips a day. An aerial cableway could transport about 2,400 people per hour per direction, with cabins holding eight to 12 people, according to the study.

In the study, the skyway begins at the Gaslamp Quarter trolley station near Harbor Dr. and 5th Ave., and roughly follow Harbor Dr., Kettner Blvd., Broadway, and Harbor Dr. again to the airport, ultimately ending at passenger terminals.

While the study determined a skyway is feasible, it did not say whether it would be the best method for mobility to alleviate traffic between the airport and downtown.

A system of this kind would also be a first in the U.S. New York and Oregon are both home to point-to-point aerial cableways: the Portland Aerial Tram and Roosevelt Island Tram. But a system with intermediate stops hasn't been implemented in the U.S.

Large aerial systems already exist in South America, Europe, and Asia. Many of those systems make intermediate stops and help with transportation through topographically challenging areas, the study says.

It's not the first time an aerial method of public transportation has been suggested in San Diego. An aerial tram from the San Diego Bay to Balboa Park was introduced in another feasibility study in 2015.