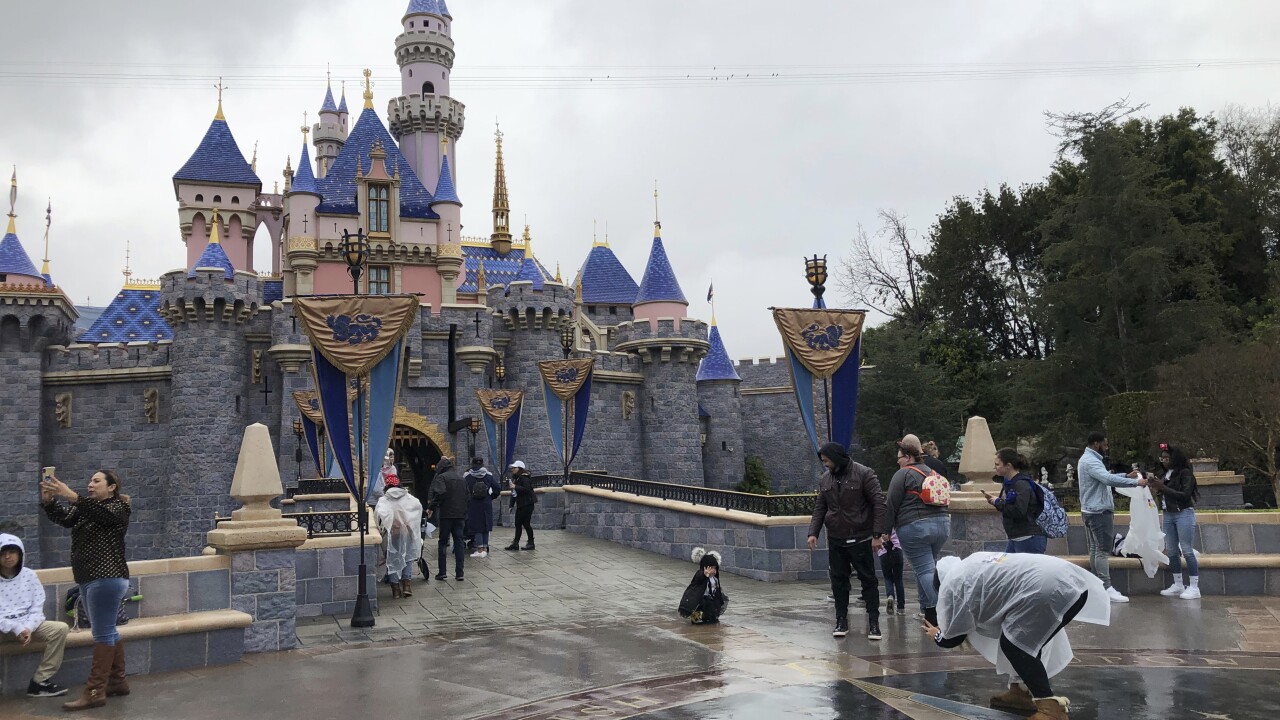 Amy Taxin/AP
FILE - In this March 13, 2020, file photo, visitors take photos at Disneyland in Anaheim, Calif. Disney is proposing to reopen its Southern California theme parks in mid-July after a four-month closure due to the coronavirus, the company said on Wednesday, June 10, 2020. Disney is postponing the mid-July reopening of its Southern California theme parks until it receives guidelines from the state. The company announced Wednesday, June 23, 2020, an indefinite postponement for Disneyland and Disney California Adventure in Anaheim. (AP Photo/Amy Taxin, File)

(KGTV) — Disney officials say the company's California parks are prepared to reopen as soon as the state gives guidance for theme parks to open their doors.

During a roundtable discussion with Florida Gov. Ron DeSantis on Wednesday, Disney World’s chief operating officer Jim MacPhee said the California theme parks are "ready to roll" once they are given the chance to reopen.

“Disneyland has been ready to roll since July awaiting guidance from the state's governor on what the reopening protocols will be,” said MacPhee.

Officials from Universal Studios who were also at the roundtable echoed the same preparedness.

"We're awaiting our park in Hollywood, as with Disney and SeaWorld, with respect to the state of California and the governor and when we'll be able to reopen. We've done the same process in terms of getting our protocols ready," said Universal Orlando CEO John Sprouls.

Disneyland, California Adventure, and Universal Studios have all been shuttered since March due to the pandemic. Disney officials had rolled out a phased reopening plan and safety measures in June with the assumption they would have guidance by July, but delayed the plans when it became clear the state was not issuing guidance anytime soon.

MacPhee said one of the challenges is convincing state leadership, and eventually potential guests, that the parks' safety precautions to prevent to spread of COVID-19 will be effective.

"I think it's driving awareness, driving a strong focus on how safe our environment is, and having people roll in," MacPhee said.

SeaWorld officials were also present at the meeting. The park announced this week that it will reopen its San Diego park on a limited basis with Zoo Days every Friday through Sunday from 11 a.m. to 7 p.m. The event has a limited capacity and guests must purchase a ticket online to reserve their visit.