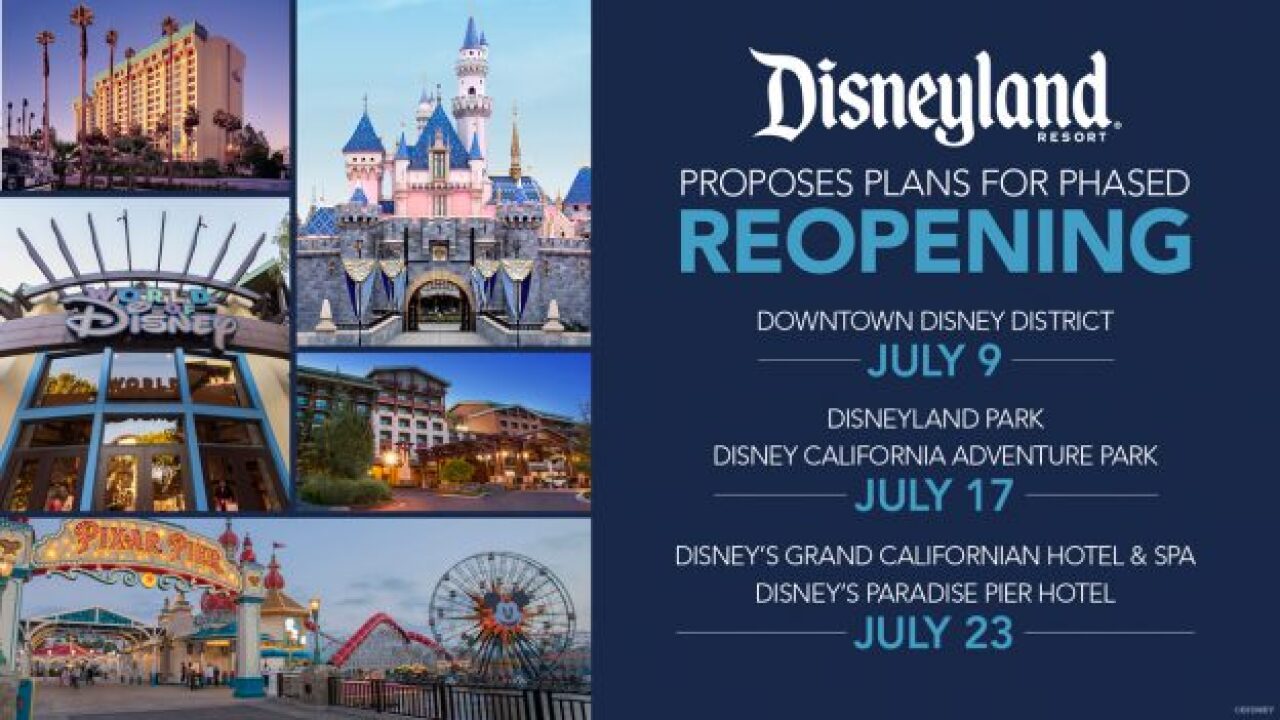 SAN DIEGO (KGTV) -- After shutting down nearly three months ago amid the deadly global coronavirus pandemic, Disneyland has announced proposed plans to begin phased opening of its Anaheim theme parks and hotels.

Park officials are proposing to open the Downtown Disney District on July 9, and then start spinning the turnstiles at Disneyland and California Adventure on July 17.

The proposal is pending state and local government approvals, the park said.

One of the many questions the public has been curious to learn was how park officials will manage physical distancing and other health safety requirements imposed by state and city officials. To help prevent overcrowding, the theme parks will limit attendance using a reservation system.

"Because theme park capacity will be significantly limited to comply with governmental requirements and promote physical distancing, the Disneyland Resort will manage attendance through a new theme park reservation system that will require all guests, including Annual Passholders, to obtain a reservation for park entry in advance," the park said on its official blog.

The park said not all events and attractions will open alongside the reopen dates. Officials said that "experiences that draw large group gatherings – such as parades and nighttime spectaculars – will return at a later date."

Other postponed experiences include character meet and greets, though the park said characters will be roaming the parks.

"Once approved, the Disneyland Resort will reopen with enhanced health and safety measures. In addition, a Guest Experience Team will be available throughout the parks and Downtown Disney District to assist guests with questions regarding these new policies," said park officials.

Disneyland and California Adventure shut its doors March but that it would only stay closed through the end of the month due the coronavirus. Since that announcement, there have been over 2 million confirmed cases of COVID-19 and over 114,000 deaths.

California Gov. Gavin Newsom announced on May 26 that theme parks would be allowed to open as part the state's Stage 3 phase of its four-stage reopening road map.

Disneyland didn't specify what enhanced health and safety measures it would be implementing except to say that information "will be shared soon" and that those policies are constantly reviews and subject to change.

"Disneyland holds a special place in the hearts of people around the world. It was created as a place where family members of all ages could have fun together – a place to “leave today and enter the world of yesterday, tomorrow and fantasy," the park said.