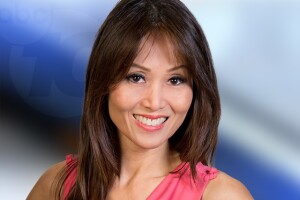 Virginia Cha brings years of extensive experience in both national and local news coverage to the 10News team.

Virginia most recently worked as an anchor at CNN/HLN and CNN.comLIVE, based at the world headquarters in Atlanta. During her tenure there, she brought viewers news about everything from Hurricane Katrina and the 2008 elections, to the death of Michael Jackson and the takedown of Osama bin Laden.

Prior to that, as a network correspondent for NBC News based in New York, Virginia was out front on unforgettable stories including the Sept. 11, 2001, terrorist attacks. She was at ground zero when the North Tower collapsed and continued to report on the emotional recovery efforts from there in the ensuing weeks. Virginia was also on the scene in Florida during the hotly contested "hanging chad" presidential election. Virginia has covered many breaking news stories from earthquake devastation in El Salvador to the return of the China Spy Plane crew to the miraculous Quecreek Mine rescue. Virginia's reports appeared on Nightly News, MSNBC, the Today Show and Weekend Today, where she also filled in on the anchor desk. She has interviewed everyone from government leaders including President Bill Clinton and Sen. Ted Kennedy, to newsmakers such as Walter Cronkite, Stephen Hawking, Spike Lee and Michael Lewis.

As a news anchor in Boston and Hartford, where Virginia began her on-air career, she earned numerous local and regional awards, including multiple Emmy awards for anchoring and an Edward R. Murrow award for team political coverage. Her experience spans a variety of formats from traditional anchoring to live shows from the field to a morning news program to in-depth medical reporting.

Virginia has been involved with a number of charity organizations, including Rosie's Place, Boys and Girls Club and First Night Boston.

Virginia graduated from Princeton University and is a Fulbright Scholar.