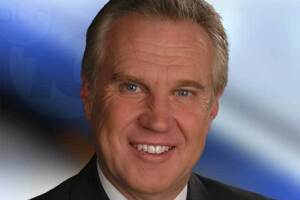 "There's so much happening in San Diego, there's never a dull news day. I love living and working in this city."

There could be no better career for Steve Fiorina than news.

Imagine being there as a medical missionary team clogs through the jungles of Honduras during the Nicaraguan War; as tremors from a 7.5 magnitude earthquake topples Mexico City.

He witnessed the execution of Robert Alton Harris, the first capital punishment case in California in 25 years.

There have been heartwarming stories to tell too: the courage of a little blind girl, the separation of conjoined twins, the Padres in the World Series, and the Chargers in the Super Bowl. Every day brings new experiences, new friend and new challenges.

He also coached little league baseball, girls' softball and youth soccer. His wife, Barbara, is the West Coast Consultant for Staywell Corporation. They have two children, Nicholas and Alexandra.