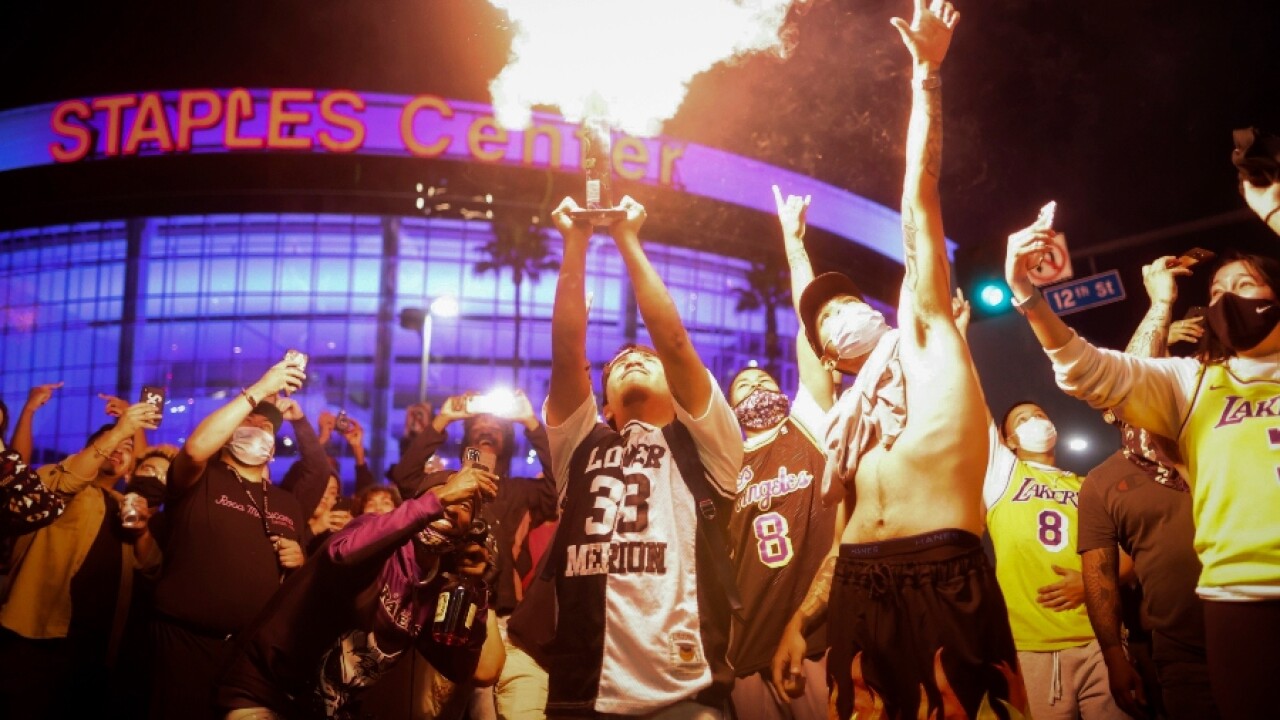 Christian Monterrosa/AP
Los Angeles Lakers fans celebrate outside of Staples Center, Sunday, Oct. 11, 2020, in Los Angeles, after the Lakers defeated the Miami Heat in Game 6 of basketball's NBA Finals to win the championship.

LOS ANGELES (CNS) - Extensive cleanup work was continuing Monday in downtown Los Angeles following a wave of destruction that accompanied an impromptu mass celebration of the Lakers' 17th NBA championship, a gathering that resulted in 76 arrests and injuries to eight police officers.

Three people in the crowd that assembled Sunday night following the Lakers' defeat of the Miami Heat were injured by "less lethal munitions fired by our officers," according to a statement issued Monday by the Los Angeles Police Department.

More than 30 buildings were damaged and 76 people were arrested on suspicion of crimes ranging from vandalism to assault on a police officer to failure to disperse, police said.

"What started out as a largely peaceful celebration of the Los Angeles Lakers NBA championship in downtown Los Angeles turned into confrontational, violent and destructive behavior late last night," according to the LAPD.

"A crowd of more than 1,000 revelers descended into the area around Staples Center after the game. Unruly individuals mixed within the crowd began throwing glass bottles, rocks, and other projectiles at officers. That is when an unlawful assembly was declared, and only a limited number of people complied and began to disperse," the LAPD said.

"A larger portion of the group broke off and began vandalizing business while continuing to engage in violent behavior, some aimed at responding officers," the LAPD said.

Officers in riot gear could be seen firing non-lethal rounds at people in the crowd, some of whom were seen on video hurling items at police after they were ordered to disperse. Video also showed people in the crowd trying to damage police vehicles by kicking and throwing objects at them.

Video on ABC7 just after 11 p.m. Sunday showed a police bus filled with fans apparently arrested by Los Angeles police officers around Staples Center during the celebration, and others handcuffed and lined up on a sidewalk.

Before the scene began to turn ugly, people were seen dancing on Chick Hearn Court and Figueroa Street and setting off firecrackers. Cars were also seen doing donuts on the streets.

At around 10 p.m., paramedics were seen loading a person into a Los Angeles Fire Department ambulance at Figueroa and 11th streets.

At the request of the LAPD, the California Highway Patrol issued a SigAlert and blocked the northbound Pico Boulevard and Ninth Street off-ramps from the Harbor (110) Freeway, as well as the Pico Boulevard off-ramp from the eastbound Santa Monica (10) Freeway, in an effort to keep people out of the area. Those ramps were reopened at 1:08 a.m., according to CHP Officer Patrick Kimball.

Police on Monday noted a starkly contrasting result from an earlier march Sunday afternoon in the Mid-City area in support of Armenia in its conflict with Azerbaijan and Turkey. The LAPD noted that the Armenian march drew an estimated 100,000 people, "with zero incidents to report."

City and county officials had urged Laker fans not to gather en masse following the game, noting that the nation is still in the midst of a COVID-19 pandemic. Staples Center officials echoed that plea, adding the game was not going to be shown on any video board outside the arena or adjacent LA Live entertainment complex.

Those warnings, however, went unheeded. It was unclear if police had stepped up patrols in the area Sunday night. Police last week said only that the LAPD was confident it would be able to adequately respond to any celebrations that erupted.

The Lakers returned to Los Angeles Monday, arriving at LAX at about 1 p.m. The team's plane was greeted with a water-cannon salute from the Los Angeles Fire Department.

Due to the coronavirus, however, the team won't be feted with a traditional victory parade that generally accompanies major sports championships.

Asked Monday if there's a safe way to celebrate the team's victory, Gov. Gavin Newsom said, "There is, if people are practicing what we're preaching as it relates to wearing a face mask and doing what we can to physically distance and to minimize the mixing outside of their key cohorts."

But Newsom noted the violence that erupted Sunday night.

"We saw some images last night that is a point of obvious concern as it relates to the transmission of the virus," he said. "So we just ask people to be cautious, to be mindful at the same time they celebrate this historic victory and celebrate one of the greatest basketball players that has ever lived, LeBron James."