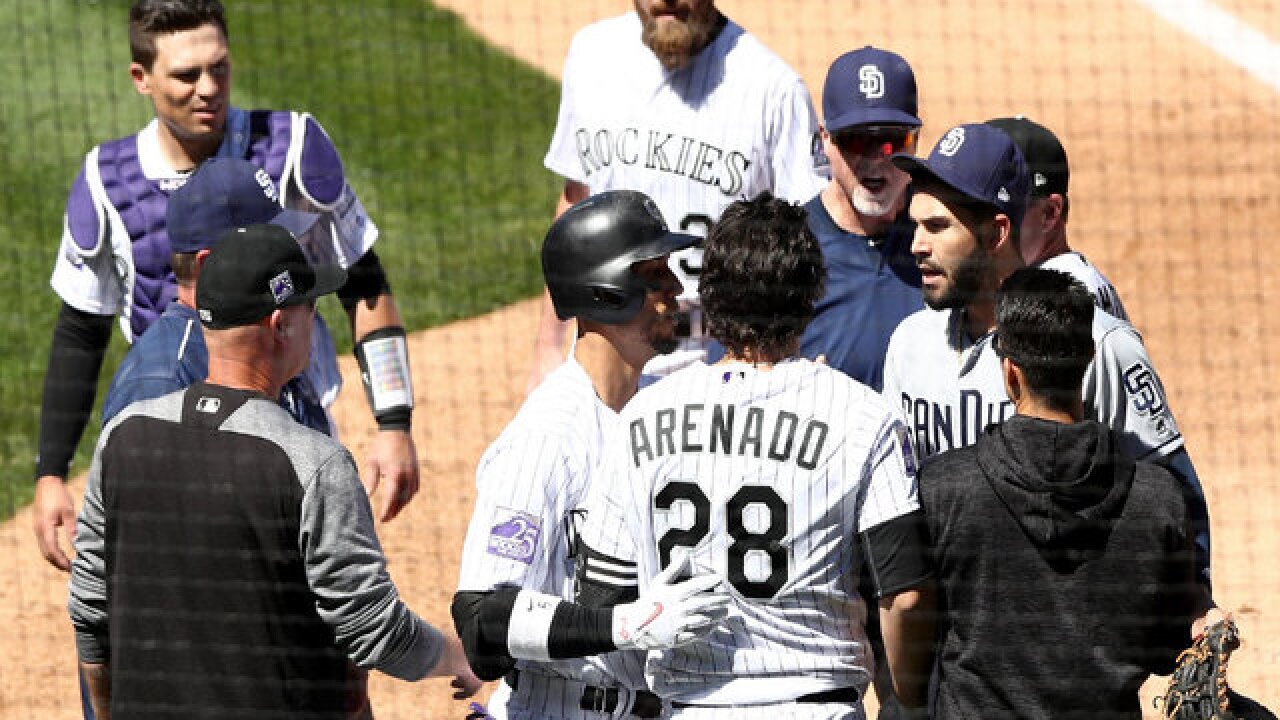 Copyright Getty Images
Matthew Stockman
Benches clear as a brawl breaks out between the Colorado Rockies and the San Diego Padres in the third inning at Coors Field on April 11, 2018 in Denver, Colorado.

DENVER (AP) - Rockies star Nolan Arenado charged the mound after a fastball from Luis Perdomo sailed behind him, setting off a heated brawl that resulted in five ejections during a testy game in which Colorado beat the San Diego Padres 6-4 on Wednesday.

Pedromo flung his glove at the rushing Arenado and missed. The big-hitting Arenado then threw a couple of huge punches at the backpedaling Perdomo, but didn't land anything squarely.

Arenado's reaction in the third woke up the slumbering Colorado bats, with the Rockies scoring five times in the inning to take a lead it wouldn't relinquish.

The tension between these two NL West teams started boiling a night earlier at Coors Field when Padres outfielder Manuel Margot got hit in the ribs by a pitch, putting him on the disabled list. The problems festered early on in the series finale, with Colorado's Trevor Story being plunked in the first and San Diego's Hunter Renfroe in the second.

That set the stage for Arenado, who didn't take kindly to a pitch that nearly grazed his back. He immediately stormed after Perdomo, who threw his glove in self-defense. Arenado kept trying to punch the pitcher as the benches cleared and the relievers sprinted in from the bullpen.

Once order was finally restored, the umpires met for several minutes before ejecting Perdomo, Ellis, Arenado, Marquez and Parra.

Colorado erupted soon after the melee, sending nine hitters to the plate with most of the damage off reliever Buddy Baumann (0-1) when he took over for Perdomo. The big play was Tony Wolters' bases-loaded, two-run single that center fielder Franchy Cordero misplayed to allow another run to score.

Cordero atoned with a solo homer as part of San Diego's three-run the sixth. Eric Hosmer hit his first homer as a member of the Padres in the eighth.

Antonio Senzatela (1-1) struggled over three innings while filling in for Marquez. Wade Davis pitched a perfect ninth for his fifth save as the Rockies finished the homestand 2-4.