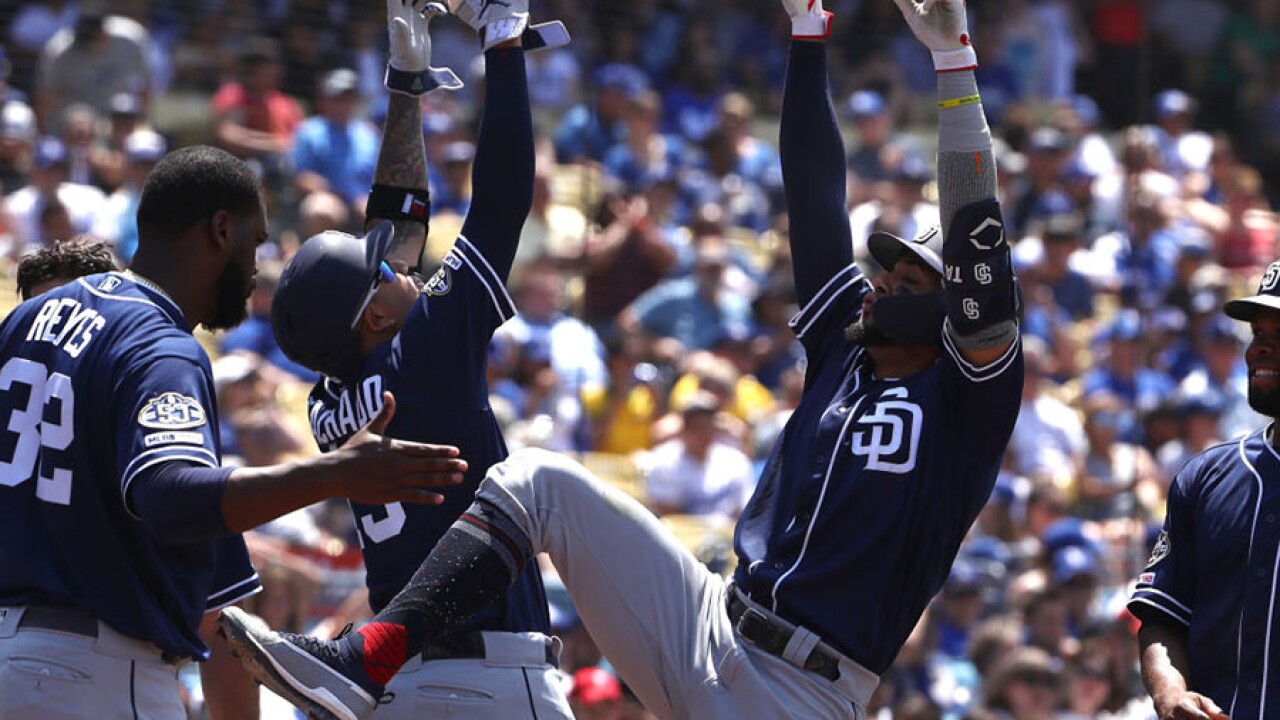 LOS ANGELES (AP) -- Fernando Tatis Jr. homered twice and had four RBIs and Manuel Margot also homered Sunday and the San Diego Padres rolled into the All-Star break on a three-game winning streak after a 5-3 victory over the Los Angeles Dodgers.

Joey Lucchesi held the Dodgers in check into the seventh inning while Margot hit a home run for the second consecutive day as the Padres handed Los Angeles its first three-game losing streak at home this season.

Max Muncy and Justin Turner homered for the Dodgers, who still closed out the first half with a major league-best 60 victories. They became the 15th team in major league history to win 60 games before the break when they defeated the Padres on Thursday, but lost the last three games of the series.

Tatis did not wait long to give the Padres the lead, lifting his home run over the left-field wall against Dodgers starter Ross Stripling five pitches into the game. It was his second leadoff home run of the season and third for the Padres.

Margot, who gave the Padres insurance runs with a two-run home run in the eighth inning Saturday, added his fifth of the season in the second inning. His drive to center field bounced off the top of the wall, just eluding the glove of the Dodgers' Alex Verdugo.

Muncy, who is headed to Tuesday's All-Star Game at Cleveland, hit his 22nd home run of the season in the second inning to bring the Dodgers within a run at 2-1.

The Padres pulled away in the fifth inning, aided by a popup that was lost in the sun. With Margot on first base, Austin Hedges hit a bloop toward Muncy at first base. Muncy moved into position, but lost track of the ball as it came down and hit him in the back of the head.

Hedges ended up with a double on the play, putting runners on first and third with nobody out. Stripling struck out Lucchesi before Dodgers manager Dave Roberts called for Pedro Baez out of the bullpen. Tatis greeted the right-hander with a home run on his fifth pitch.

It was the first multi-homer game for Tatis, who has 14 on the season.

Lucchesi (7-4) gave up three runs and six hits over 6 1/3 innings with no walks and four strikeouts. He earned his first career victory over the Dodgers in five tries. Kirby Yates pitched the ninth inning for his 30th save in 31 tries this season. Yates earned the save in all three victories over the Dodgers in the series.

Stripling (3-3) gave up four runs and six hits over 4 1/3 innings with three strikeouts.