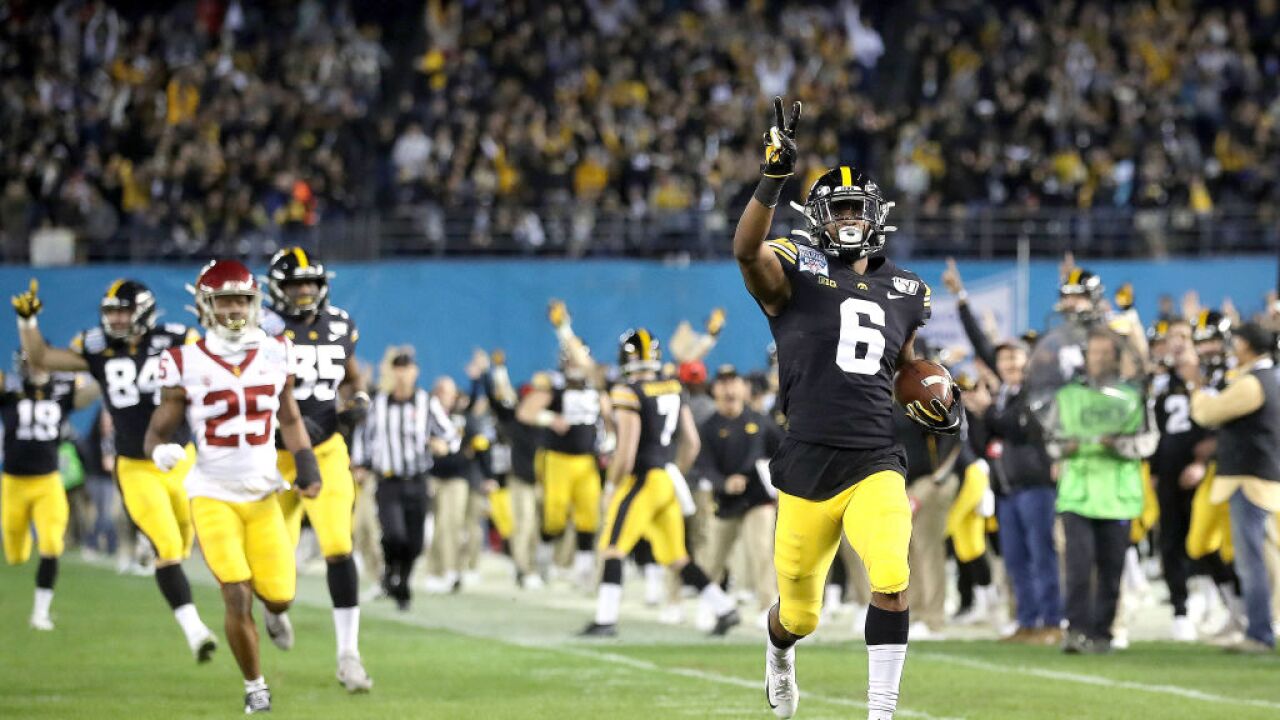 Sean M. Haffey/Getty Images
SAN DIEGO, CALIFORNIA - DECEMBER 27: Ihmir Smith-Marsette #6 of the Iowa Hawkeyes returns a kickoff 98 yards for a touchdown during the first half of the San Diego County Credit Union Holiday Bowl against the USC Trojans at SDCCU Stadium on December 27, 2019 in San Diego, California. (Photo by Sean M. Haffey/Getty Images) 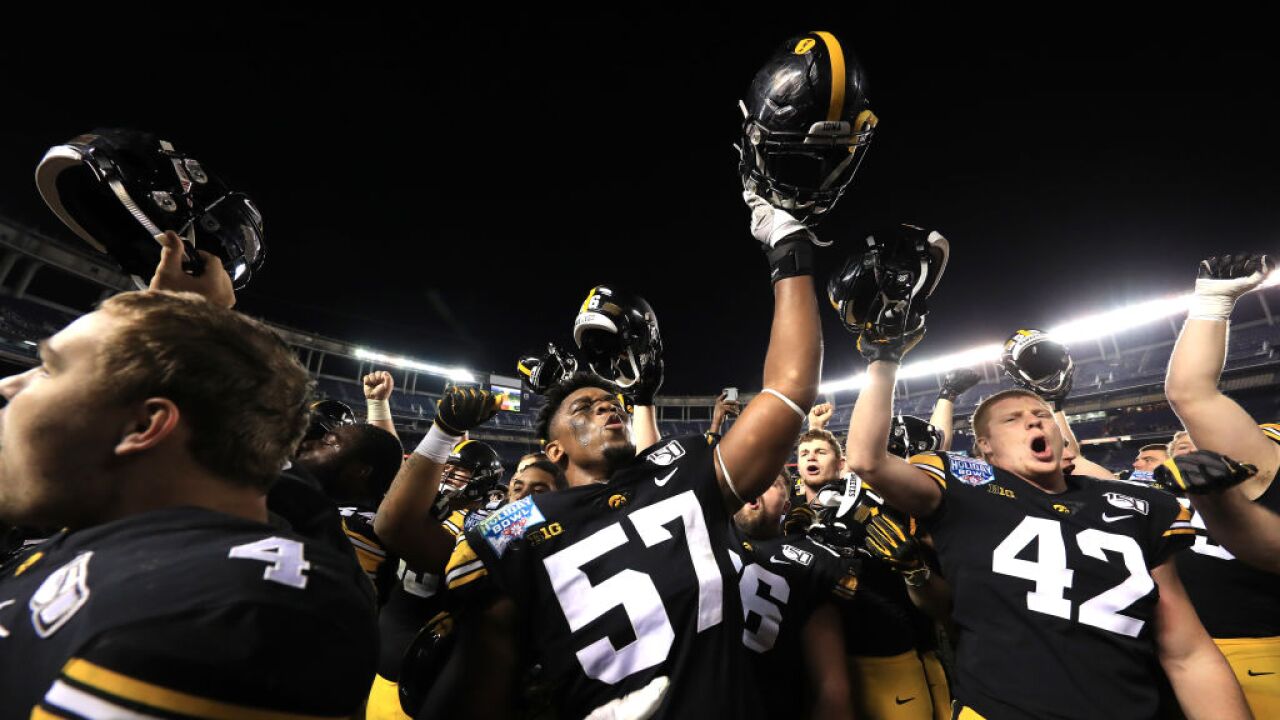 SAN DIEGO (CNS) - Iowa scored touchdowns all four times it had the ball in the first half of the 42nd annual Holiday Bowl, then ended USC's comeback hopes by scoring the final 21 points in a 49-24 victory.

Hawkeyes receiver Ihmir Smith-Marsette was selected as the offensive MVP for scoring touchdowns on a 6-yard first-quarter run and a 98-yard kickoff return and 12-yard touchdown pass from Nate Stanley, both in the second quarter Friday.

USC cut the deficit to 28-24 on Chase McGrath's 32-yard field goal as time expired in the second quarter and Stephen Carr's 2-yard run on the opening drive of the third quarter.

The Trojans (8-5) seemed poised to take their first lead when Michael Brown recovered his own onside kickoff and Kedon Slovis completed an 11-yard pass to Tyler Vaughns on the first play of the drive, giving the USC a first down on Iowa's 43-yard line.

However, Slovis was knocked out of the game on the next play when he suffered an elbow injury on a sack by Epenesa. The Trojans were forced to punt three plays later and the Hawkeyes responded with a 14-play, 90-yard drive that consumed 7:19, culminating with Tyler Goodson's 1-yard touchdown run with three minutes, 54 seconds left in the third quarter.

Iowa (10-3) added two touchdowns in the fourth quarter, both off turnovers.

Nick Niemann intercepted a pass by Fink and returned it 25 yards for a touchdown with 1:43 remaining.

"They played better than us," USC coach Clay Helton said.

Fink completed 12 of 18 passes for 74 yards with one interception.

The Hawkeyes opened the scoring on Tyrone Tracy's 23-yard touchdown run on the game's opening possession.

The loss was the Trojans' second-largest in a bowl game, behind only its 49-0 loss to Michigan in the 1948 Rose Bowl.

This is the first time USC has had back-to-back seasons with at least five losses since 2000, Paul Hackett's last as its coach when they were 5-7, and 2001, when it was 6-6 in Pete Carroll's first.

Iowa removed the Tigerhawk from its helmet for the game in honor of Hayden Fry, its coach from 1979-98, who died Dec. 17 at the age of 90. Fry introduced the logo to the university's athletics department.

This was the third time both Tigerhawks have been removed from the helmet for a football game. The first was Nov. 2, 1991, the day after six people were killed in a shooting on the Iowa campus. The second was the 1996 Alamo Bowl, when Diane Mitchell, the mother of linebacker Mark Mitchell, was killed in a car crash on the way to the game in San Antonio.

The Hawkeyes' helmet included a decal honoring Bump Elliott, Iowa's director of athletics from 1970-91. He died Dec. 7 at the age of 94.

Elliott scored Michigan's third touchdown in its 49-0 victory over USC in the 1948 Rose Bowl.

The game marked the end of the Big Ten Conference's six-year contract to supply a team for the Holiday Bowl. It will be replaced by a team from the Atlantic Coast Conference for at least each of the next six years under an agreement announced in August.

The Pac-12 will continue to supply a team for at least six more years. A Pac-12 team has played in the Holiday Bowl each year since 1998.