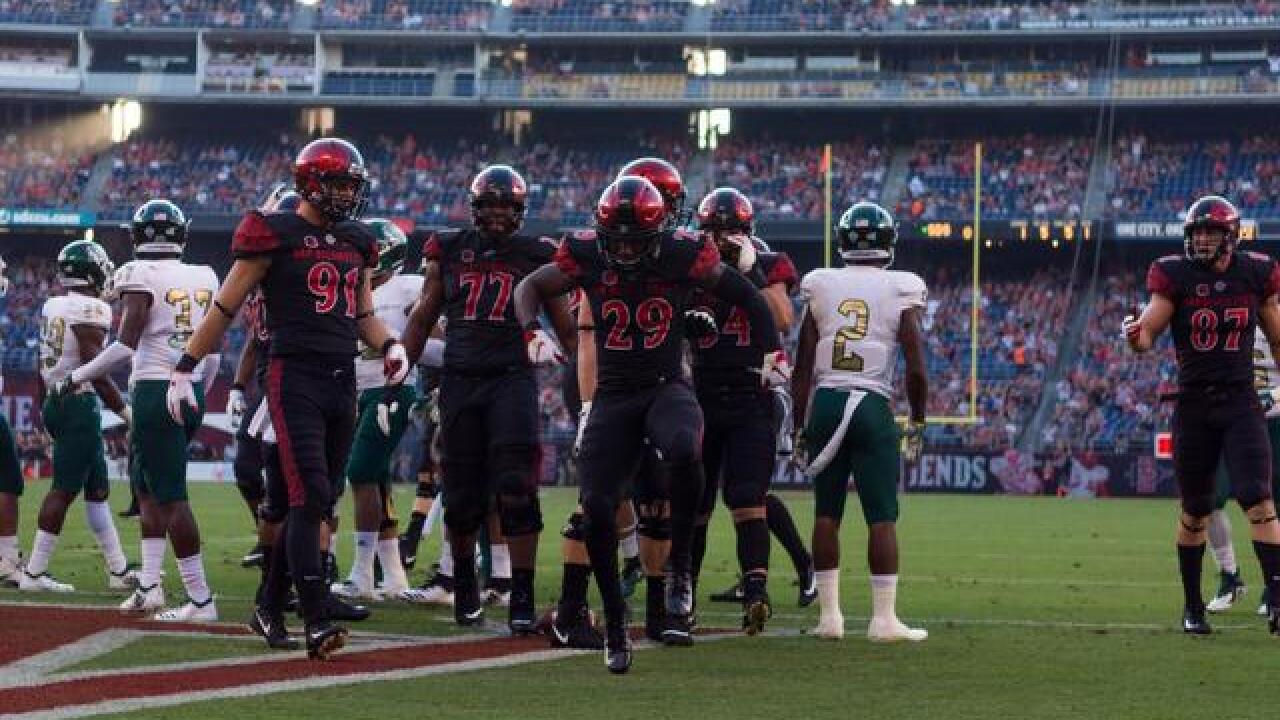 Copyright 2018 Scripps Media, Inc. All rights reserved. This material may not be published, broadcast, rewritten, or redistributed.
Raymond Gorospe
<p>Juwan Washington celebrates after scoring the first of his career-high three touchdowns during the Aztecs 28-14 victory over Sacramento State on Sept. 8 at SDCCU Stadium.</p>

San Diego State football is looking to secure its second straight home victory this weekend, as it hosts No. 23/25 Arizona State on Sept. 15 at SDCCU Stadium.

The Aztecs are coming off a 28-14 home victory over Sacramento State, but will be without their starting quarterback in senior Christian Chapman.

Chapman suffered a sprained MCL in his left leg against the Hornets, and will be out of the lineup for three to six weeks.

Junior quarterback Ryan Agnew replaced Chapman in the second quarter, completing 11 out of 17 passes for 159 yards and 21 rushing yards on three attempts.

Agnew will make his first collegiate start against the Sun Devils.

Head coach Rocky Long said Agnew now has the chance to show his potential as a starting quarterback.

“(Agnew has) prepared himself every week to be the starter and now he gets to be the starter,” Long said. “It’ll be interesting to see. He's plenty gifted enough as an athlete and he's smart enough to have a very good game.”

The Aztecs’ running game, led by junior running back Juwan Washington, will face a tough test this weekend. The Sun Devils have allowed the least amount of rushing yards in the country, giving up an average of only 32 yards on the ground through their first two games.

Long said that Washington is able to create plays even when the offensive line is performing poorly.

"I think Juwan has met our expectation level. He's proved he's a very good running back,” Long said. “He even proved last week that he is a pretty good running back when the offensive line is not blocking very well."

Read more at The Daily Aztec