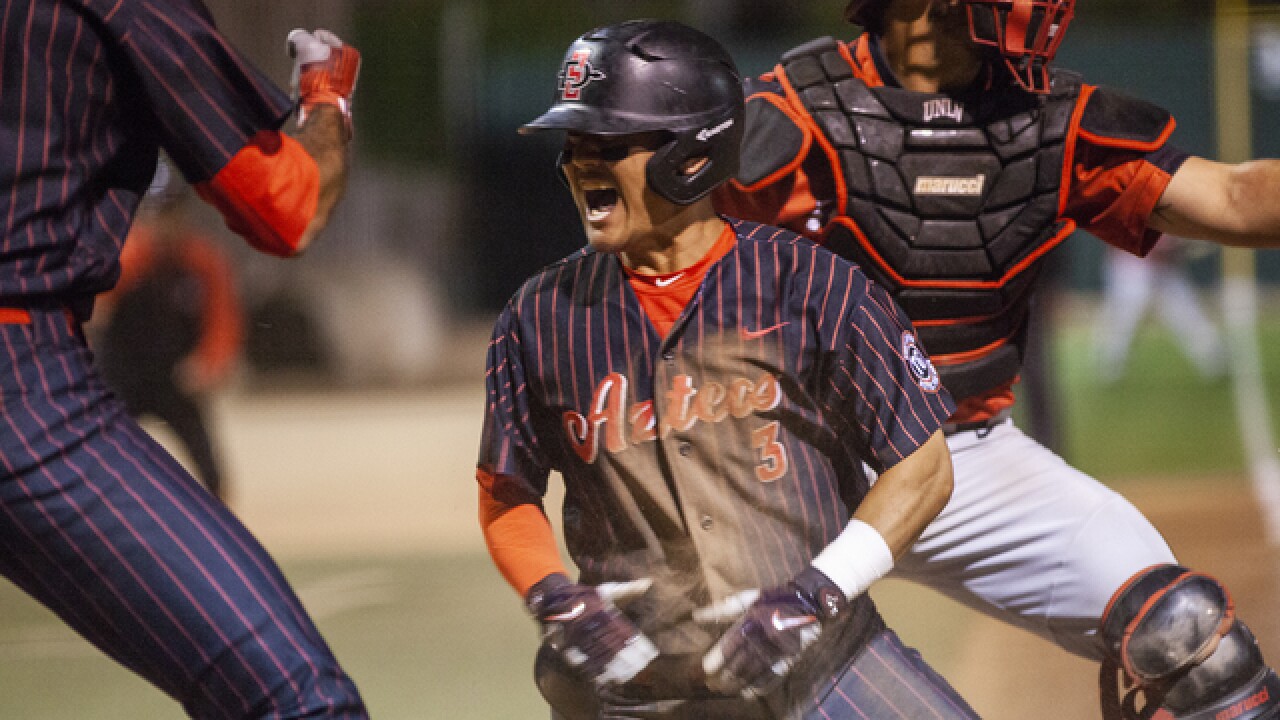 One day after grinding out a come-from-behind 2-1 victory over No. 3 San Jose State in the tournament’s opening round, the No. 2 Aztecs entered the twelfth inning gridlocked in a 3-3 tie against No. 4 University of Nevada, Las Vegas.

With a direct trip to the championship final on the line, the stakes were high and both teams were going on nine innings without a run.

SDSU loaded the bases with one out in the bottom of the frame, and after a flyout to left field by junior first baseman Jordan Verdon, sophomore second baseman Jacob Maekawa slid in safe to home plate to score the game-winning run and send the Aztecs to the championship game with a 4-3 victory.

“The one thing I’ll tell you is, true to form, the Aztecs do it the hard way,” head coach Mark Martinez said.

The inning began with Maekawa getting hit by a pitch from UNLV senior pitcher Bryan Menendez, the third time in four innings the Aztecs got the lead-off man on base.

Freshman outfielder Matt Rudick singled to get Maekawa to second, before an errant pick-off throw from Menendez went into center field, sending Maekawa to third and Rudick to second.

Following a groundout to third by senior shortstop David Hensley and intentional walk to senior outfielder Chase Calabuig, Verdon stepped to the plate and smacked a 3-1 pitch to shallow left field.

The ball actually beat Maekawa to the plate, but the second baseman put his head down and slid safely just under the tag of Rebels junior catcher Seth Mullis.

“Verdon coming up, I had full confidence he was going to get us in,” Maekawa said. “It was a close play at the plate but once I saw the ball go up in the air I was going 100 percent.”

SDSU will now await the winner of UNLV and SJSU tomorrow, who play earlier in the day before the championship game in the evening.