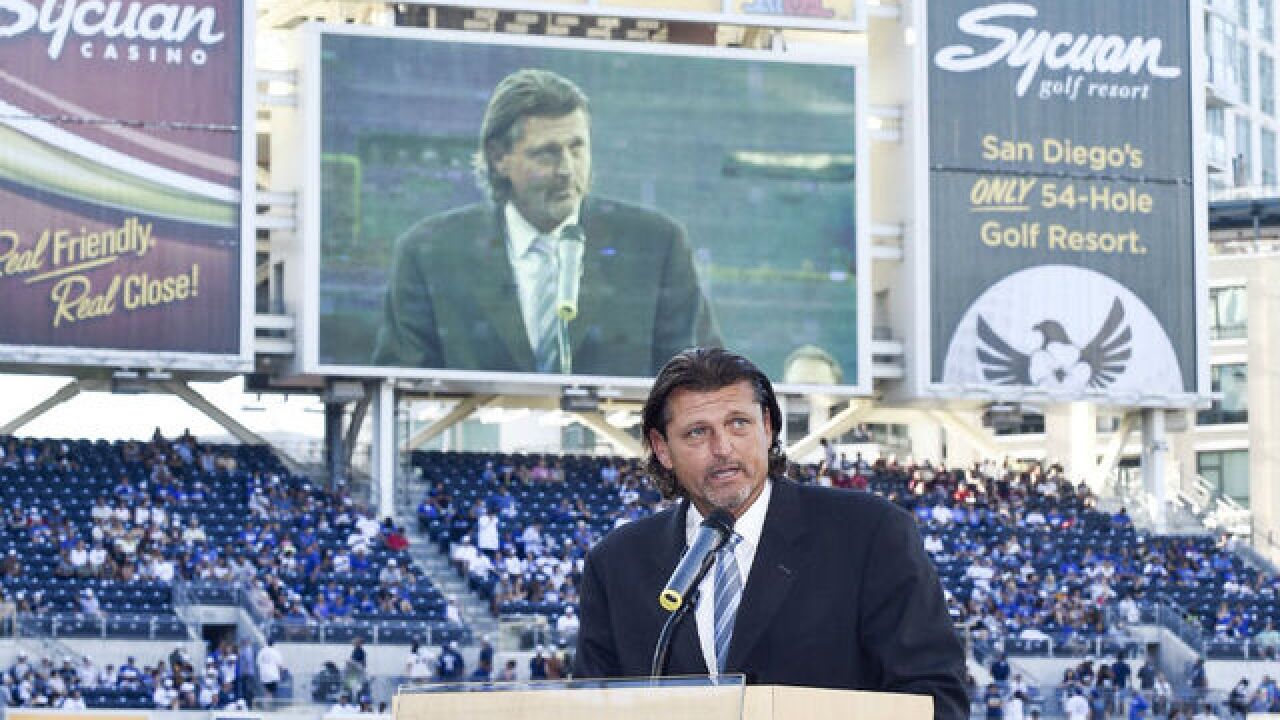 Major League Baseball's latest Hall of Fame inductee has a special place in San Diegans' hearts. From his time pitcher shutout innings for the San Diego Padres to his work off the field in the community, Trevor Hoffman is described as a "Hall of Fame person."

Now, Cooperstown is recruiting another of San Diego's favorites.

The National League saves leader was announced as part of the class of 2018 inductees Wednesday. In his third year of eligibility, Hoffman gained 79.9 percent of the vote.

San Diego sports personalities and writers were quick to show why Hoffman is so beloved:

Congratulations to #51! Trevor Hoffman, always a Hall of Fame guy, but now it's official. A Hall of Famer who will forever be enshrined in Cooperstown! A class guy, now in a class of greats! ⚾️

Thrilled for Trevor and his family. Thrilled for Padres fans everywhere. Looking forward to celebrating all season long!

Congrats to Trevor Hoffman. There's no one better to represent Baseball than Trev.
Very proud to call him a San Diego Padre and friend.
Enjoy the moment, it was well deserved.⚾️👍

Congratulations to the great #Padre now Hall of Famer Trevor Hoffman! Simply a wonderful day for the organization and every Padres fan. A great player and a man of incredible character and integrity. So happy for Hoffy and his family

Here's an example of why so many people are thrilled for Trevor Hoffman: pic.twitter.com/bKf8fHCQro

Congratulations to one the best to ever wear a padre uniform and close out game, my uncle from another mother, one my mentors... @THoffman51 #51toHOF

Congrats to @THoffman51. Hall of Fame bound and deservedly so. Thank you for all you did to make me feel welcome to the @Padres. HOF class of 2018! #HellsBells pic.twitter.com/WWbTK3dsXy

Trevor Hoffman is finally in #HOF. The list of other #HOFers with #Padres ties is longer than you think. https://t.co/5IC7WYGwvH pic.twitter.com/lhOIdyRuhO

And of course, teams received the move as a welcomed addition to baseball's hall of immortality:

Congrats to @Padres legend @THoffman51 on being elected to the National Baseball Hall of Fame! #HOFfman pic.twitter.com/M7Q3SoPw2J

He's in! Congratulations to Trevor Hoffman on his selection for induction into the @baseballhall!#BearDown

RT to congratulate @THoffman51 ,one of the greatest ever, on his Hall of Fame induction! One lucky fan wins a ball signed by one of the @Padres best ever! #HOF2018 #Storm #UnitedWeStorm #LakeElsinoreStorm #milb pic.twitter.com/Wau1ro8clM