Rockies rally in 9th to beat Padres, take 3 of 4 games 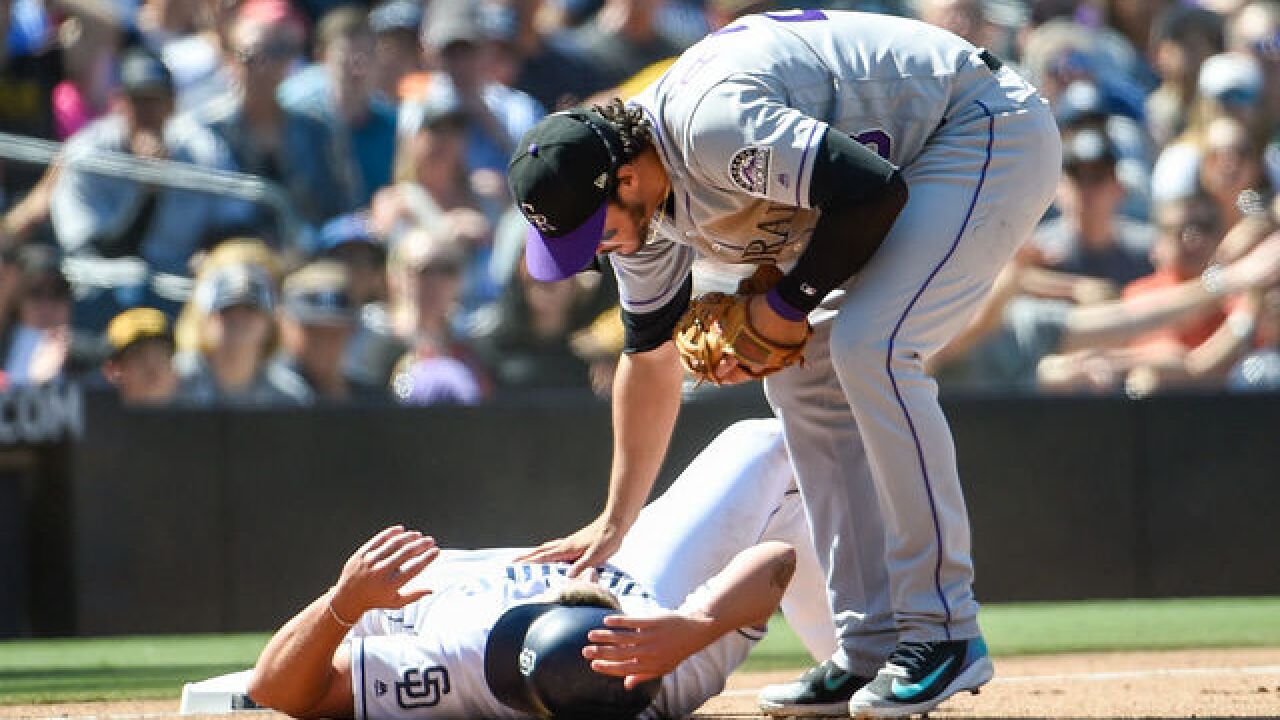 Copyright Getty Images
Denis Poroy
<p>SAN DIEGO, CA - APRIL 5: Nolan Arenado #28 of the Colorado Rockies talks with Hunter Renfroe #10 of the San Diego Padres after tagging him out during the seventh inning of a baseball game at PETCO Park on April 5, 2018 in San Diego, California. (Photo by Denis Poroy/Getty Images)</p>

SAN DIEGO (AP) — Ryan McMahon drew a bases-loaded walk off All-Star closer Brad Hand to break a scoreless tie in the ninth inning and DJ LeMahieu added a two-run single for the Colorado Rockies, who beat the San Diego Padres 3-1 Thursday to take three of four.

Starters Tyler Anderson of the Rockies and rookie Joey Lucchesi of the Padres pitched well but were gone before the game was decided.

Hand (0-2) walked Trevor Story and Chris Iannetta to open the ninth and the Rockies loaded the bases when second baseman Carlos Asuaje committed an error when he couldn't hold onto the throw from third baseman Christian Villanueva after Gerardo Parra's bunt.

Hand struck out pinch-hitter Carlos Gonzalez, but then walked McMahon on four pitches to bring in Story. Charlie Blackmon struck out before LeMahieu singled to with two outs. All three runs were unearned.

The Rockies had only four hits.

Adam Ottavino (1-0) pitched two innings for the win and Wade Davis worked the ninth for his fourth save. Davis allowed Manuel Margot's leadoff homer, his first, and then retired the side.

Anderson lasted into the seventh inning in a strong rebound from a rough first start, when he allowed seven runs in just 2 1-3 innings at Arizona on Friday. Anderson retired the first 11 Padres batters and allowed only four hits while striking out four and walking none.

Lucchesi allowed a leadoff single to Blackmon and then picked him off. Lucchesi walked consecutive batters with two outs in the second before striking out Anderson. The rookie then retired the side in the next three innings.

Chase Headley pinch-hit for Lucchesi with two outs in the fifth and struck out looking with runners on first and second. Headley is hitless in 12 at-bats. Headley has made just two starts at third base.

The Padres were willing to take on his $13 million salary in order to get Bryan Mitchell from the Yankees. Mitchell struggled in his first start, a loss to Colorado on Monday night.