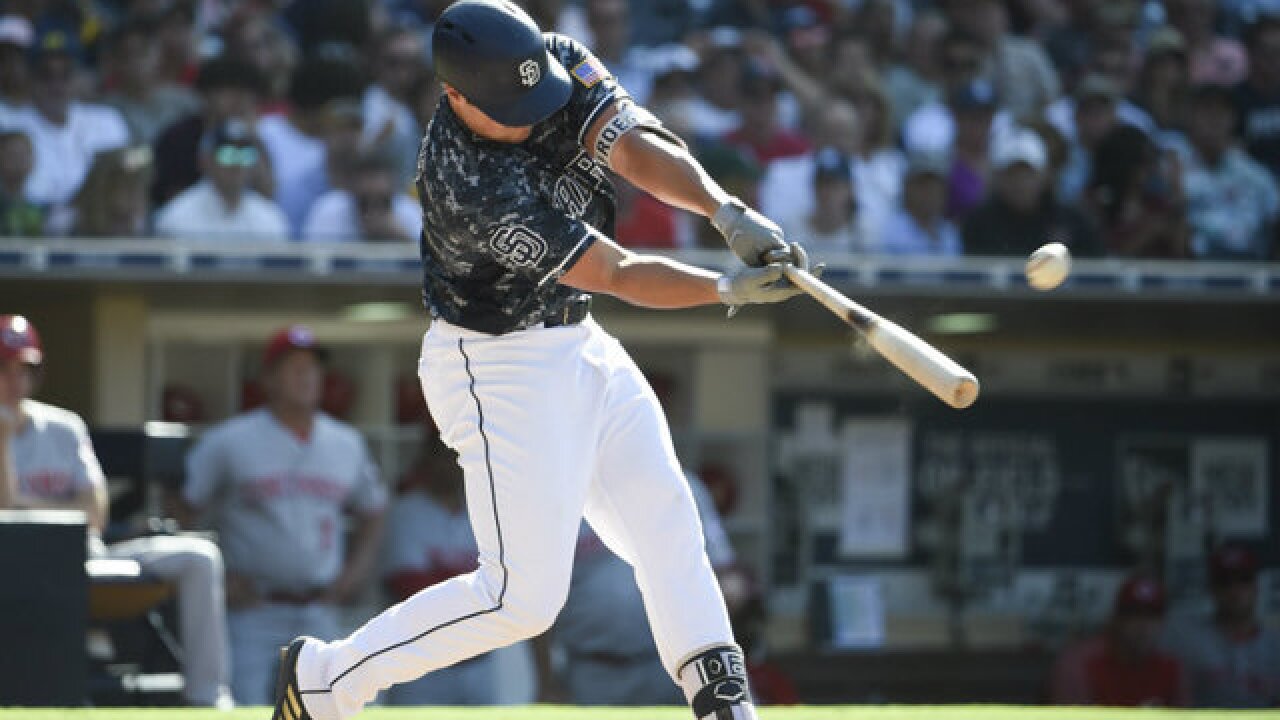 Copyright Getty Images
Denis Poroy
Hunter Renfroe #10 of the San Diego Padres hits a grand slam during the fifth inning of a baseball game against the Cincinnati Reds at PETCO Park on June 3, 2018 in San Diego, California.

SAN DIEGO (AP) - Hunter Renfroe's pinch-hit, go-ahead grand slam in the in the fifth inning lifted Tyson Ross and the San Diego Padres to a 6-3 victory against the Cincinnati Reds on Sunday.

Batting for Ross, Renfroe drove a 1-2 pitch from Luis Castillo (4-6) off the second deck of the Western Metal Supply Co. brick warehouse in the left-field corner to give the Padres a 4-2 lead with one out. After connecting on the hanging breaking ball, Renfroe held the bat out with his left hand while admiring the shot, and then flipped it before beginning his trot. It was Renfroe's third career grand slam, first for the Padres this season and his first career pinch homer. It was his third homer this season.

Castillo had loaded the bases on singles by Franmil Reyes and Freddy Galvis, and a walk to Manuel Margot. Reyes was forced at home on Raffy Lopez's dribbler before Renfroe's slam.

Lopez hit an RBI single in the sixth.

He allowed Eugenio Suarez's leadoff homer to left in the second, his 11th, and Scooter Gennett's RBI single in the fifth.

With the Padres leading 5-2, manager Andy Green had closer Brad Hand face the heart of the Reds' order in the eighth, including lefty-hitting Joey Votto and Gennett. Votto, who had three hits, struck out, but Hand then allowed a homer to Gennett, his 12th. Suarez struck out, Adam Duvall singled and Jose Peraza flied out.

Cory Spangenberg homered for San Diego in the eighth, his fourth.

Kirby Yates pitched the ninth for his first save. Votto came up with two on and two outs and grounded out to end it.

Castillo (4-6) allowed four runs and six hits in 4 2-3 innings, struck out three and walked one.