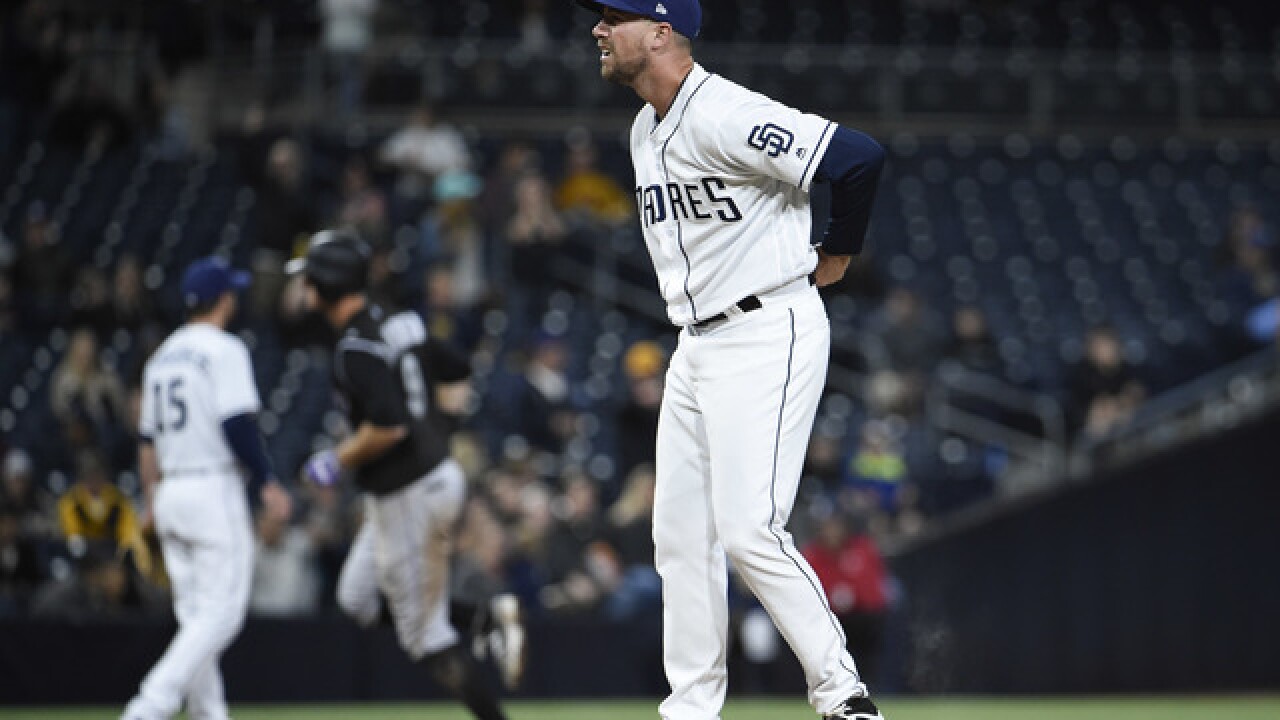 Copyright Getty Images
Denis Poroy
<p>SAN DIEGO, CA - APRIL 2: Kyle McGrath #44 of the San Diego Padres stands on the mound after giving up a solo home run to DJ LeMahieu #9 of the Colorado Rockies during the ninth inning of a baseball game at PETCO Park on April 2, 2018 in San Diego, California. (Photo by Denis Poroy/Getty Images)</p>

SAN DIEGO (AP) — It wasn't nerves, just a dose of excitement that had Chad Bettis out of sorts on the mound.

But after three shaky innings in his season debut, he righted himself and helped the Colorado Rockies beat the winless San Diego Padres 7-4 on Monday night.

"I felt like, honestly, I had expended all that extra adrenaline and I got back to getting my legs under me and was able to stand tall on my backside," Bettis said. "Earlier, I was just picking my leg up and going."

"Those guys squared those balls up and they were hit hard," manager Bud Black said. "We had a good night offensively."

Bettis (1-0) allowed two runs and five hits in five innings. Limited to nine major league starts last year as he was treated for cancer, the right-hander struck out four and walked four before five relievers finished up.

Wade Davis got one out for his second save.

"Chad scuffled early a little bit as it just seemed his delivery was a little quick. He wanted to hurry it," Black said.

After a third-inning visit from Black, Bettis got on track. He made an in-game adjustment by slowing down and leaning on his curveball.

"Looking at the pitcher I am now compared to a couple of years ago, those innings would speed up on me," he said. "Now I'm able to take a step back and really analyze what's going on and bear down and make the pitches."

His curve not only was effective, but it served another purpose.

"It's always been my reset pitch mechanically," he said. "If I go too fast it is not competitive."

Desmond drove in three runs as the Rockies improved to 2-2.

Wil Myers and Cory Spangenberg homered for the Padres, who dropped to 0-4. Bryan Mitchell struggled in his five-inning debut with San Diego.

"I have some stuff in my triceps and it felt like I couldn't make the throw back into the infield," he said. "The throws from the outfield pushed it over the edge."

Padres manager Andy Green wasn't sure of Myers' status. Myers moved back to the outfield from first base this season.

"We don't have a clear answer," Green said.

Desmond hit a two-run homer in the fifth and an RBI double in the third to help the Rockies win for the 10th time in their last 16 games at Petco Park. Blackmon and LeMahieu added back-to-back solo homers in the ninth — the fourth already for Blackmon this season.

Mitchell (0-1) gave up five runs, eight hits and three walks. He failed to strike out a batter.

"He wasn't sharp," Green said. "He couldn't find his curve. He had chances to minimize innings and escape out of innings and he didn't do it."

Before Desmond's homer, Carlos Asuaje's double pulled the Padres to 3-2 as it chased home Eric Hosmer after Hosmer hit his third double in three games. The Padres, though, left the bases loaded for the second consecutive inning.

Carlos Gonzalez, who surpassed Vinny Castilla for the fourth-most hits (1,207) in Rockies history, pushed Colorado ahead 2-1 with an RBI double in the third to score LeMahieu after he opened with a walk. Gonzalez was driven in by Desmond's double for a 3-1 edge.

Myers homered in the first inning to tie it at 1.

The Rockies took a 1-0 lead when Blackmon led off with a double and scored on Nolan Arenado's sacrifice fly.

Rockies: Desmond (knee) returned to the lineup after leaving Saturday's game early. ... RHP Carlos Estevez (oblique) is scheduled to throw a simulated game at the team's Arizona facility on Tuesday.

Padres: C Austin Hedges (back) was a late scratch. ... Myers missed the previous game with a bad back.

Rockies: LHP Kyle Freeland would like to duplicate his lone start at Petco Park, which came last year in his rookie season. Although he got a no-decision on May 4, he allowed only one run and three hits in 6 1/3 innings.

Padres: RHP Tyson Ross makes his first start in his second stint with the Padres after spending last year with the Texas Rangers while recovering from a shoulder injury.