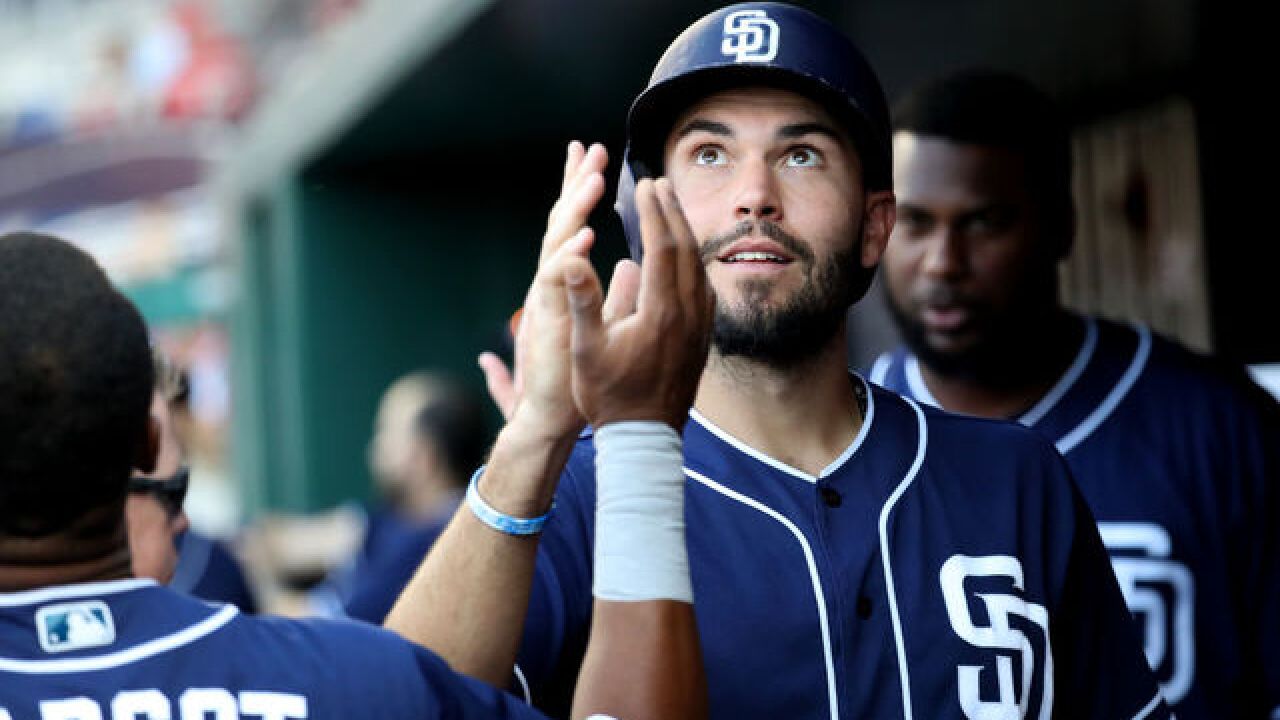 Copyright Getty Images
Rob Carr
<p>WASHINGTON, DC - MAY 23: Eric Hosmer #30 of the San Diego Padres celebrates in the dugout after scoring a run against the Washington Nationals in the sixth inning at Nationals Park on May 23, 2018 in Washington, DC. (Photo by Rob Carr/Getty Images)</p>

WASHINGTON (AP) — Christian Villanueva hit a two-run double, Tyson Ross pitched into the seventh inning and the San Diego Padres defeated the Washington Nationals 3-1 Wednesday to salvage the finale of a three-game series.

Ross (4-3) didn't allow a runner past second base until the seventh, struck out nine and yielded one run in 6 2/3 innings. Brad Hand recorded the final five outs for his 15th save, escaping a two-on, one-out jam in the ninth by inducing Spencer Kieboom to ground into a game-ending double play.

San Diego took a 1-0 lead when Manuel Margot singled in Freddy Galvis with two outs in the fifth. The Padres nearly added to the lead a batter later, but Bryce Harper's diving catch in right-center robbed Ross of a hit.

An inning later, Villanueva lofted a two-out fly to right that glanced off Harper's glove in a play originally scored an error but later changed to a double. It allowed two runs to score and ended Washington starter Erick Fedde's season debut.

It was a largely promising outing for Fedde (0-1), who had a 9.39 ERA in three starts last season. Washington recalled Fedde from Triple-A Syracuse on Wednesday to fill a spot in the rotation created when the Nationals played a doubleheader Saturday.

Fedde allowed three runs and four hits while striking out six in 5 2/3 innings.

Matt Adams had three of Washington's seven hits, including a solo homer to lead off the seventh.

Nationals: To make room for Fedde on the roster, Washington designated RHP Carlos Torres for assignment. Torres was 0-0 with a 6.52 ERA in 10 relief appearances.

Padres: San Diego's road trip continues in Los Angeles on Friday as LHP Clayton Richard (3-5, 4.87 ERA) starts the opener of a three-game set against the Dodgers.

Nationals: After a day off, Washington begins a three-city road trip in Miami on Friday. RHP Max Scherzer (7-1, 1.78) will start on five days of rest.