Padres' Paddack grabs first win in shut down of Mariners 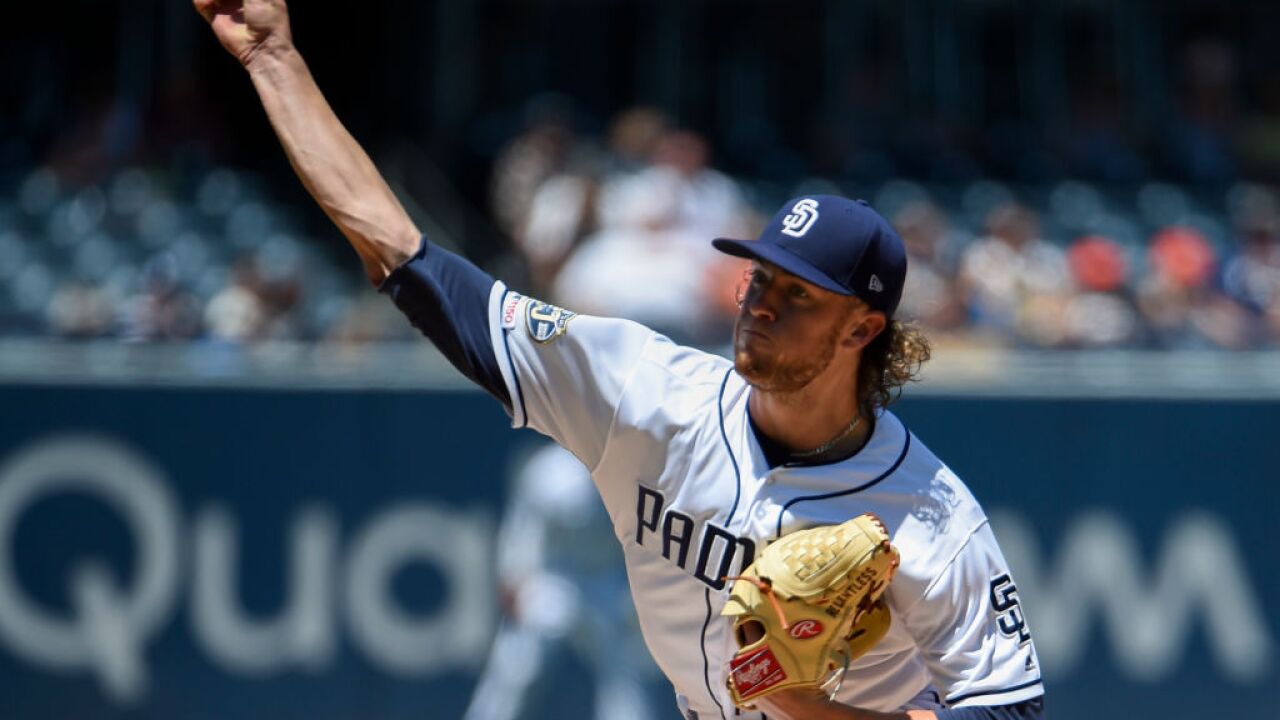 Five batters later, Paddack was onto something special. He got out of a bases-loaded jam and went on to retire his final 19 batters, shutting down baseball's highest-scoring offense and outdueling Felix Hernandez in a brilliant performance for his first major league win, 1-0 on Wednesday.

"Long time coming," said the 23-year-old Paddack, who missed all off 2017 after having Tommy John surgery. "It was a very exciting moment out there."

He held Seattle to one hit in seven innings while striking out nine and walking only one, combining with relievers Trey Wingenter and Kirby Yates on a two-hitter.

The Padres held MLB's highest-scoring offense to three runs in two games and kept the Mariners from adding to their big league total of 56 home runs.

Paddack (1-1) said he got only two hours sleep Wednesday night, getting home at 11 p.m. and then having to arrive early for the 12:40 p.m. matinee game. His body was aching and although he felt like he had a fever, he said he was checked out and didn't have one.

He said his first four pitches "kind of scattered around a little bit. After that first out of the inning, I got dialed in with (catcher Francisco) Mejia. From there on, nothing but good things.

"I think it helped me focus a little more just because I knew my body wasn't 100 percent," he said.

After walking Haniger, he got Daniel Vogelbach to pop out to Mejia. Domingo Santana singled, Omar Navarez hit a comebacker for the second out and Paddack hit Tim Beckham with a pitch.

After that it was lights out for Paddack, who struck out Dee Gordon to end the threat and start his run of retiring 19 straight, nine by strikeout.

Paddack made the big league roster after an outstanding spring. In his return from the surgery, he pitched only 90 innings between Class A and AA last year.

Green said there was "never a point in time after the first four pitches" that he worried about Paddack. "He was taken care of. He was in good shape, good enough to do what he did."

Green mentioned that Paddack has the word "relentless" stitched on his glove.

"He goes after them. He doesn't yield. I don't think it's ever enough for him," Green said. "I think some guys start thinking, about, 'It's going really well right now.' There's none of that with him. He wants to crush the opposition when he's out there. Today was just sensational for him."

"He did a pretty good job, man," the Mariners veteran and 2010 AL Cy Young Award winner said. "He was impressive. He's got good stuff."

Yates pitched the ninth for his 12th save in as many chances. He allowed a single to Daniel Vogelbach, who was erased in a game-ending double play.

Kinsler homered off the balcony on the second level of the Western Metal Supply Co. Building in the left field corner with two outs in the second, his second of the season.

Fernando Tatis Jr. extended his hitting streak to 12 games when his double fell in among three converging defenders in shallow left field in the third.

Hernandez pitched well other than allowing Kinsler's homer. He held San Diego to one run and three hits in seven innings, struck out eight and walked one.

Scott Servais said it was the best he'd seen Hernandez pitch in his four years of managing the Mariners.

"The only hiccup was the first-pitch home run that Kinsler hit," Servais said. "Kinsler has seen him a ton, probably 70, 75 career at-bats against him. Felix did an awesome job. I feel bad we couldn't extend the game or get him the win today, but we'll take plenty of outings like that."

Said Hernandez: "It feels really good. Last time was a long time ago, probably last year at the beginning when I faced Boston I think, Tampa. I give credit to Narvaez, he called a really good game.

"It was fun to pitch like that, when you've got good movement on your fastball and you're painting the corners."