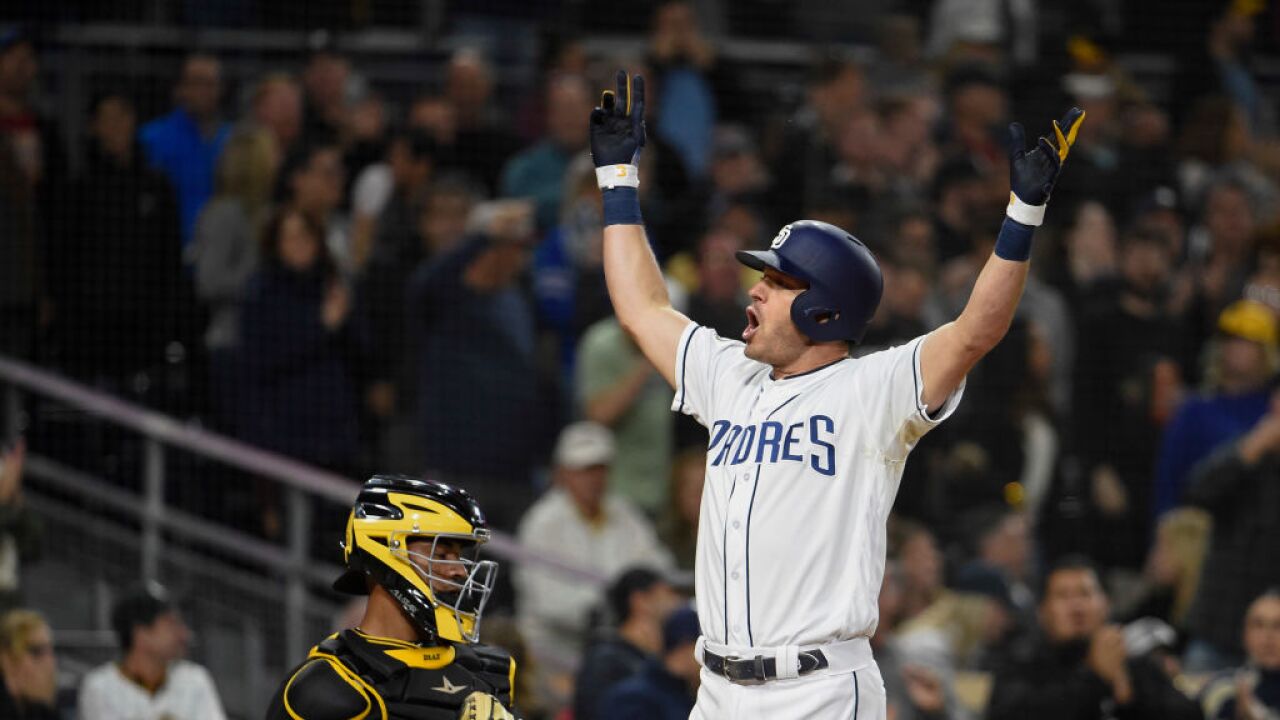 SAN DIEGO (AP) — Ian Kinsler hit a mighty three-run homer to put the San Diego Padres ahead of the Pittsburgh Pirates, and then had a profane outburst as he crossed home and then again in the dugout.

Many fans on social media felt it was directed at them, and manager Andy Green said it "was not the right response."

Kinsler, who hasn't been a fan favorite as he's struggled since joining the Padres on an $8 million, two-year deal, said otherwise.

"That was for my teammates," Kinsler said after the 4-3 victory Thursday night. "It had nothing to do with the fans. It's for my teammates. It's an inside thing with them. Just trying to get everybody fired up. We had a tough road trip. I'm a passionate player. I try to get my teammates going. That was it."

He declined to say exactly what he said.

"That's why it's inside," he said. "We need the fans behind us. We need the city of San Diego to be passionate with us and on our side. Hopefully that's the way they see this team."

Kinsler's homer and reaction overshadowed the Padres setting the major league record by going 8,020 games without a no-hitter since their inception. Then again, fans have been used to that since 1969.

Franmil Reyes also homered, connecting off San Diegan Trevor Williams an inning before the Pirates starter left with discomfort in his right side.

Green had a different take than Kinsler.

"I think we're aware of what's going on," the manager said. "I understand the emotion of the game a little bit, the frustration he's felt up to this point. I'm not excusing anything by any stretch, but understanding what it feels like to go to the plate every day and grind and struggle. The world we live in, you hear a lot of hostility, so some of that comes out at times."

Green said the Padres have an "outstanding" fan base, and that fans have the right to express displeasure.

"We as professionals should handle that displeasure in a more positive way than it was handled today," Green said. "With him, he knows that. He's played the game a long time. ... Clearly not expressed well today. Ultimately, though, he's a passionate baseball player."

Green said he'd talk with Kinsler about it.

Kinsler's three-run shot off Richard Rodriguez (0-3) with two outs in the sixth gave the Padres a 4-2 lead and got them off the hook for some shoddy play. It was Kinsler's fifth.

Gregory Polanco made it a one-run game with a homer to right in the seventh, his third.

Adam Frazier singled to left off lefty Eric Lauer with two outs in the third to extend the Padres' streak of futility into record territory. The Padres remain the only major league team without a no-hitter. The previous longest streak of 8,019 games without a no-hitter from a franchise's inception was by the New York Mets, who got their first no-hitter, by Johan Santana, on June 1, 2012.

"It was still kind of early in the game," Frazier said. "It's pretty cool to extend that streak. I didn't know about it; just trying to get a hit. I'm glad we weren't the team that let them break that record, or whatever you want to call it."

The Padres have had pitchers take a no-no into the eighth inning or beyond several times since their expansion season of 1969 but have never completed one. Some fans feel the franchise is cursed because manger Preston Gomez lifted Clay Kirby after eight no-hit innings against the New York Mets on June 21, 1970.

"It's not a record that we want. I think one's coming soon," Lauer said.

Adam Warren (3-1) pitched two-thirds of an inning for the win, and Kirby Yates pitched the ninth for his major league-leading 17th save.

Reyes homered into the Padres' bullpen beyond the fence in left-center with one out in the third, his 13th.

The Pirates tied it in the fifth after the Padres gave them several extra chances, including when rookie Kevin Newman, who played at Poway High, doubled to shallow right on a ball that ticked off Kinsler's glove as the second baseman tried to make a basket catch while right fielder Reyes and first baseman Eric Hosmer also converged on the ball. Newman went on to score on Frazier's soft chopper to the right of the mound, beating Lauer's throw home.

The Pirates went ahead 2-1 on an unearned run in the sixth on two singles, an error and a wild pitch.

Williams, who played at Rancho Bernardo High, left with two outs in the fourth after striking out Myers. He allowed one run and two hits, struck out five and walked one.

Williams loaded the bases with one out in the first on a walk, single and hit batter before striking out Alex Dickerson, who also played at Poway High, and getting Myers to ground out.

"I think it's hard to evaluate the outing. He was competing like he always does. He was going out there, making pitches," manager Clint Hurdle said.