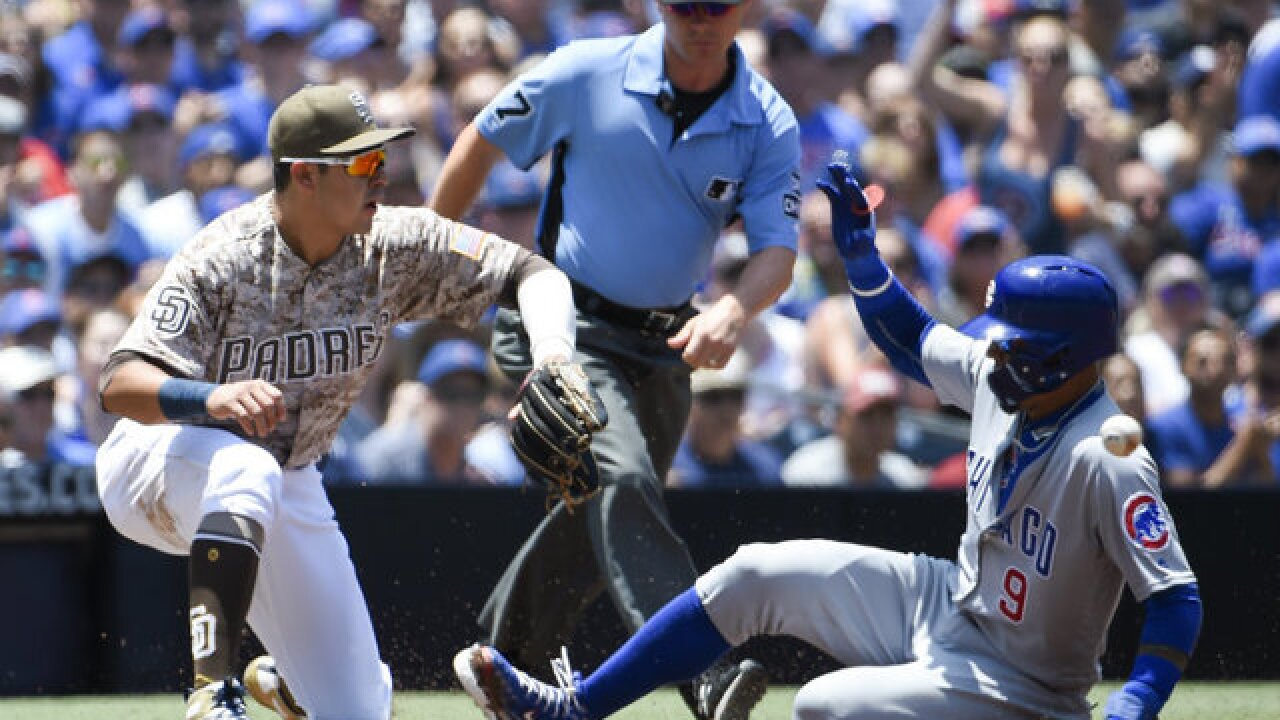 Copyright Getty Images
Denis Poroy
Javier Baez #9 of the Chicago Cubs slides into third base ahead of the throw to Christian Villanueva #22 of the San Diego Padres during the first inning of a baseball game at PETCO Park on July 15, 2018 in San Diego, California.

SAN DIEGO (AP) - Jon Lester won for the eighth time in nine starts, Jason Heyward drove in two runs and the Chicago Cubs swept the San Diego Padres with a 7-4 win on Sunday.

The Cubs jumped to a 5-0 lead after two innings against rookie left-hander Eric Lauer, who came within one out of his first complete game in a 4-1 victory over the Los Angeles Dodgers in his previous start.

It was more than enough for Lester (12-2), who struck out seven in 5 1/3 innings. The All-Star lefty allowed three runs and six hits while improving to 10-1 in his last 12 starts.

Lester was selected for Tuesday's showcase in Washington by the players' vote, but he won't be on the active roster due to Sunday's outing.

The 34-year-old Lester carried a 7-1 lead into the sixth inning before getting into a jam. He hit Freddy Galvis with the bases loaded, forcing in a run. James Norwood then came in and got Austin Hedges to pop out before walking pinch-hitter Carlos Asuaje, bringing home another run.

Manuel Margot then flied out to right, ending the inning.

Pedro Strop surrendered Hunter Renfroe's seventh homer in the seventh, but Justin Wilson got three outs before Brandon Morrow pitched the ninth for his 22nd save.

Chicago closed out a 4-2 road trip to San Francisco and San Diego and opened a 2 1/2-game lead over slumping Milwaukee in the NL Central.

Christian Villanueva also homered for San Diego, hitting his 19th of the season in the fourth. Villanueva had two hits and scored twice.

Lauer, meanwhile, was in trouble early and often. He faced seven batters and threw 37 pitches in the first inning, when Javier Baez and Addison Russell hit RBI singles and Ben Zobrist drove in a run on a groundout. Heyward hit a two-run single in the second.

That was it for Lauer (5-6), who allowed five hits, struck out three and walked one.

The Cubs added an unearned run in the fourth, when the Padres committed three errors.

David Bote drew a leadoff walk, stole second and took third on catcher Hedges' throwing error. He scored on Anthony Rizzo's sacrifice fly. Kris Bryant then beat out a dribbler for an infield single and reached third on consecutive errors by Hedges and right fielder Renfroe. Bryant was stranded when Heyward popped up to shortstop.

Bryant brought in a run in the sixth when he was hit by a pitch by Adam Cimber with the bases loaded.