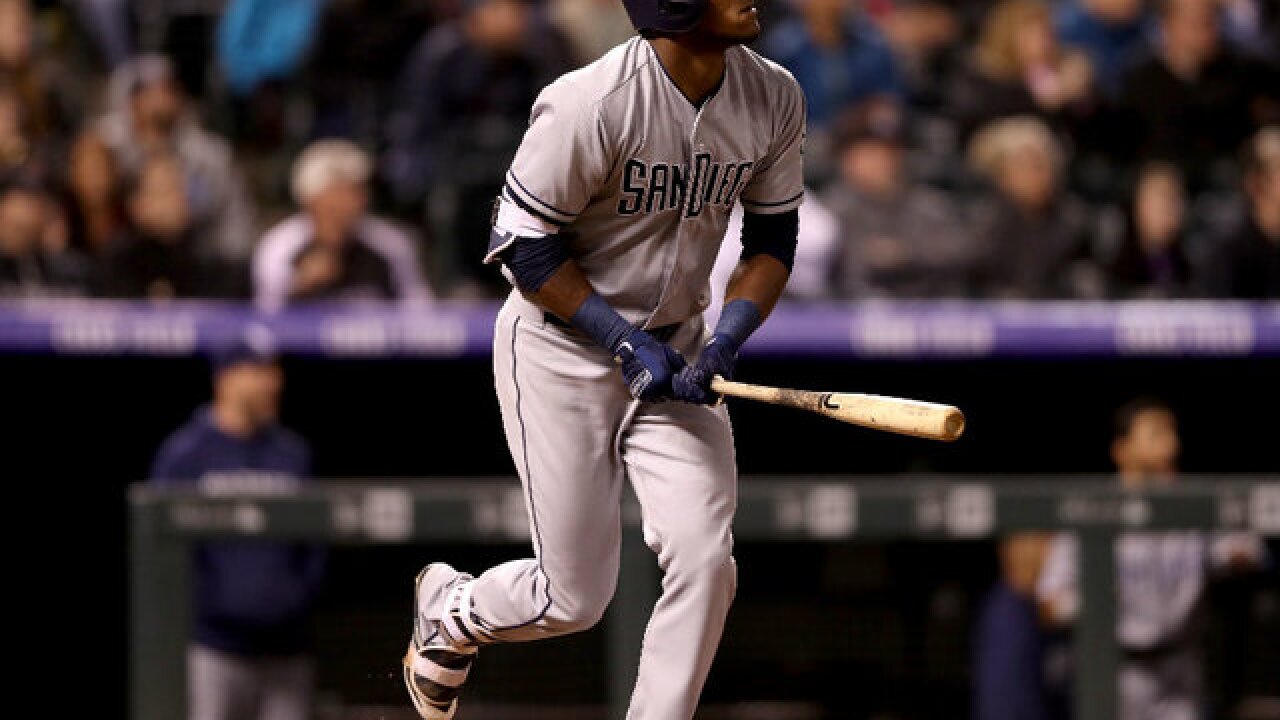 Copyright Getty Images
Matthew Stockman
Franchy Cordero #33 of the San Diego Padres hits a 2 RBI home run in the seventh inning against the Colorado Rockies at Coors Field on April 23, 2018 in Denver, Colorado.

DENVER (AP) - Carlos Asuaje homered and had a career-high four RBIs, Franchy Cordero went deep during a nine-run seventh inning and the San Diego Padres romped past the Colorado Rockies 13-5 on Monday night.

Asuaje hit a three-run shot in a four-run first and Cordero added a two-run drive during a 45-minute seventh for San Diego. Wil Myers had four hits and two RBIs, and Eric Hosmer drew a career-high four walks to go with his two hits.

The Padres won for just the second time in seven games.

It was the eighth meeting of the year between the teams and their first since a bench-clearing brawl on April 11. The scuffle ensued after Padres starter Luis Perdomo threw a 96 mph fastball behind Rockies star Nolan Arenado, who charged the mound and threw punches at Perdomo.

Suspensions were handed out to Arenado, Perdomo and Colorado outfielder Gerardo Parra for their roles in the fight.

There were no further altercations Monday.

Arenado and Trevor Story homered for the Rockies, who dropped to 3-7 at home. Colorado starter Chad Bettis, who had allowed two runs or fewer in his first four starts of the year, dug himself a 4-0 hole in the first but left after five innings with a 5-4 lead.

In the seventh, Jake McGee (0-1) got just one out gave up four runs. Scott Oberg came in and yielded another five runs while getting only one out. Antonio Senzatela finally closed the door after allowing three hits and no runs.

In all, San Diego sent 15 batters to the plate in the inning. The Padres had eight hits and four walks. Pinch-hitter Matt Szczur, Cordero and Myers each got two hits.

The nine runs were the most for the Padres in an inning since they also scored nine against the Chicago Cubs on July 24, 2014.

Myers scored on a balk in the first and Asuaje followed with a three-run homer, marking the fourth straight game in which the Rockies have allowed multiple runs in the opening inning.

Colorado tied it in the bottom half with two-run shots by Arenado and Story.