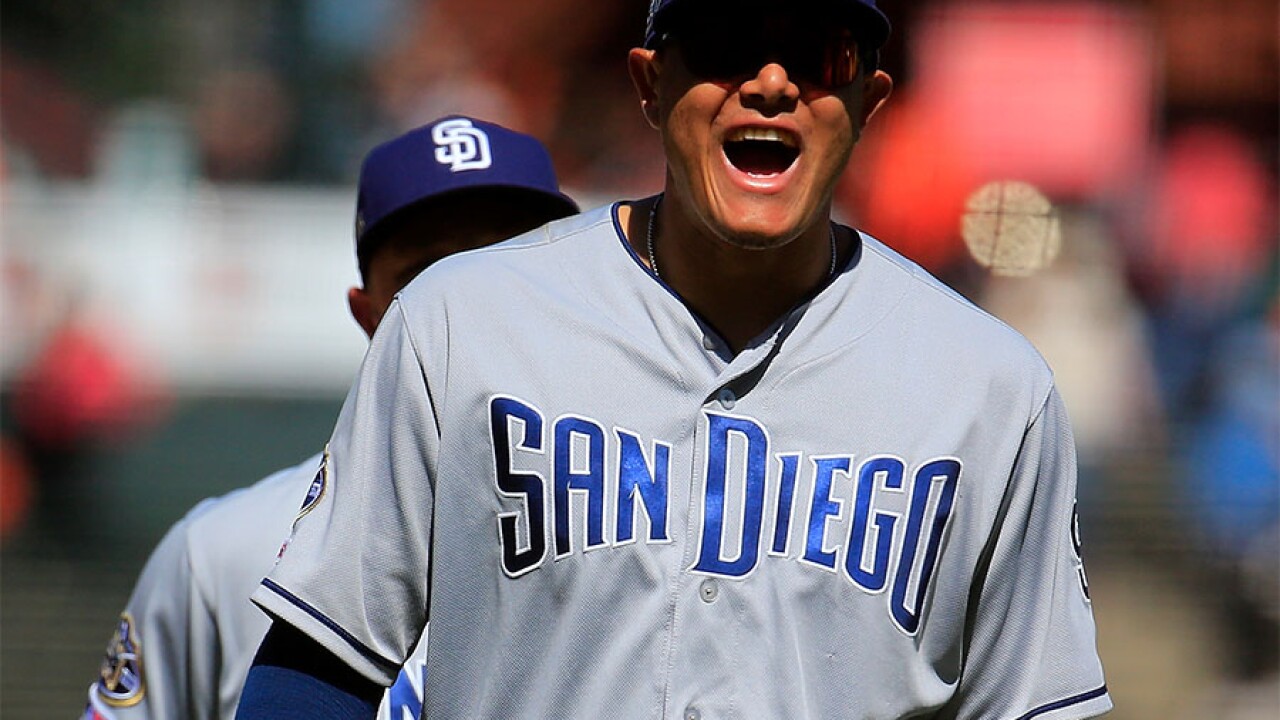 SAN FRANCISCO (AP) - Manny Machado came through with the type of performance the San Diego Padres hoped for.

Machado put the Padres ahead with his third home run of the season and made some sparkling defensive plays in a 3-1 win over the San Francisco Giants on Wednesday.

Signed to a $300 million, 10-year contract, Machado broke a 1-1 tie in the sixth inning with an opposite-field drive to right on a fastball from Dereck Rodríguez (1-2). Machado went 1 for 4 and is hitting .244 with six RBIs.

"He made one mistake all day," Machado said. "I was able to take advantage of the situation. I've hit a few balls that hit the top of that wall. I'm happy I got one over this time."

Machado made a shoestring catch on pinch-hitter Brandon Belt's infield popup for the game-ending out with runners at second and third.

"We were all screaming in that dugout. Nobody catches that last ball but Manny," Padres manager Andy Green said.

A two-time Gold Glove winner, Machado also made a great barehanded throw to retire Yangervis Solarte on a grounder leading off the third. He threw out Erik Kratz trying to score from third on Kevin Pillar's fifth-inning grounder.

Wil Myers added a run-scoring single in the ninth off Will Smith, and the Padres won for the fifth time in seven games.

Nick Margevicius (1-1) got his first major league win. Making his third start, the 23-year-old left-hander allowed one run and five hits in six innings with no walks and six strikeouts, including his last four hitters. He retired his first nine batters before a home run by Pillar, who has nine RBIs in his last three games. Right-handed hitters were 1 for 27 against Margevicius before the homer.

"Going into the game I felt my stuff was going to be all right. I was working in the bullpen on my slider," Margevicius said. "It wasn't quite where I wanted it, but once I got into the game and started throwing it a little I got more comfortable with it. I felt pretty confident with my pitches. I felt pretty good."

Aside from a playoff game last season with Double-A San Antonio, Margevicius had not pitched above Class A before making his major league debut on March 30 against the Giants. He singled in the fifth for his first big league hit.

Kirby Yates pitched the ninth to remain perfect in seven save chances and finish a seven-hitter. Brandon Crawford walked with one out and Evan Longoria doubled. Yates struck out Solarte before Belt's popup to Machado.

Rodríguez gave up two runs and four hits in seven innings as San Francisco lost for the sixth time in eight games. The Giants are 0-4 in series this year, including two against the Padres, the first time they lost their first four series since 1983.

"We had a couple of empty at-bats in key situations, and that was the difference, but Dereck threw the ball very well. Great job on his part," Giants manager Bruce Bochy said. "We have a lot of baseball left. We're not happy with where we're at, but you've got to understand there's other good teams that haven't gotten off to a great start either.