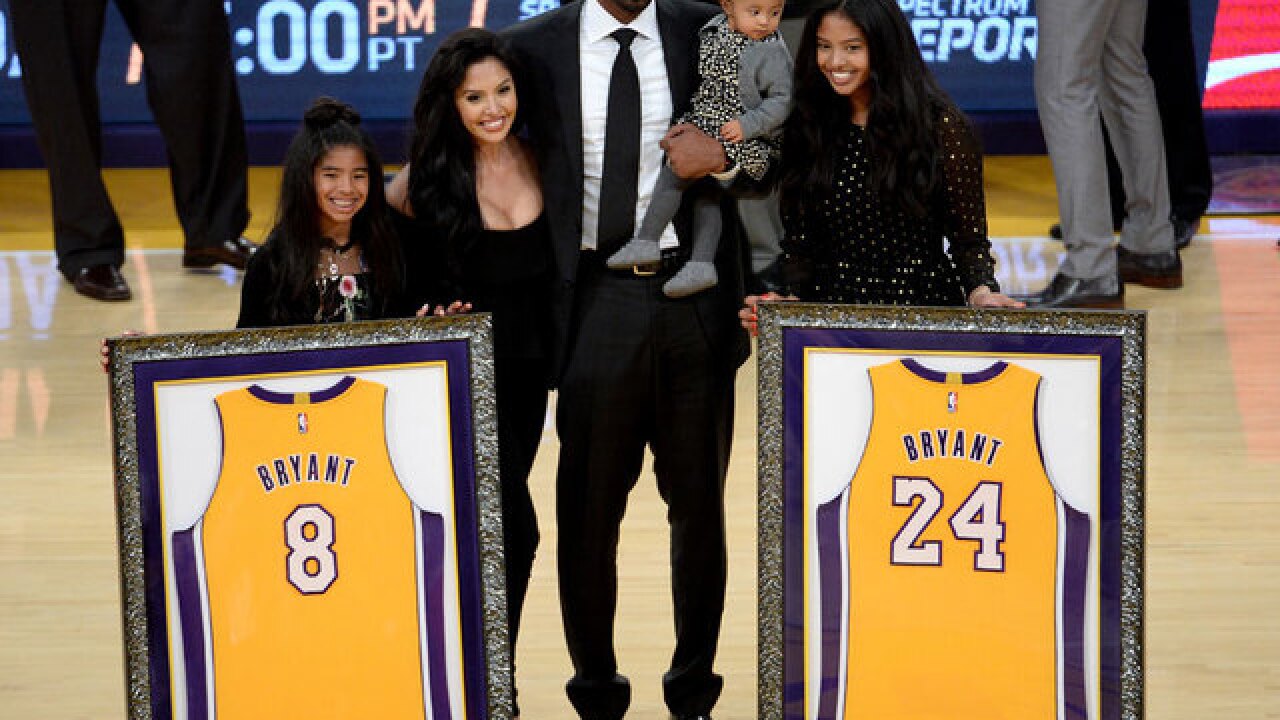 Copyright Getty Images
Maxx Wolfson
Kobe Bryant poses with his family at halftime after both his #8 and #24 Los Angeles Lakers jerseys are retired at Staples Center on December 18, 2017 in Los Angeles, California.

"It's not about my jerseys that are hanging up for me, it's about the jerseys that were hanging up there before," Bryant said. "Without them, I couldn't be here today. They inspired me to play the game at a high level."

Bryant went on to praise what he called "this class organization," thanking the team's late owner Jerry Buss for "believing in a skinny old kid from Lower Marion High School" in the Philadelphia suburb of Ardmore.

Team CEO and controlling owner Jeanie Buss, a daughter of Jerry Buss, said "We are retiring both your numbers because if you separated each of the accomplishments under those numbers each of those players would qualify for the Hall of Fame."

Thanks to the Lakers organization and the best fans in the world. You gave a six-year-old boy his Laker dream, and I'll always love you for it. #laker4life #DearBasketball https://t.co/8xShQUGkC3

Bryant officially became a Laker on July 1, 1996, when the team completed a previously agreed-to trade with the Charlotte Hornets, who had chosen him five days earlier with the 13th choice in the NBA draft as part of the trade agreement with the Lakers.

He played his entire career with the Lakers, helping the team win five NBA championships.

Bryant's 20 seasons played with one organization is an NBA record. He is among five players to play at least 20 seasons in the league, along with Kevin Garnett, Robert Parish and Kevin Willis, who all played 21, and Abdul-Jabbar, who played 20.

Bryant was the league's MVP in the 2007-2008 season, received All-NBA honors 15 times, including 11 first-team selections, and was chosen to play in the league's All-Star Game 18 times.

As for the game, the Lakers lost in overtime to the defending champion Warriors.