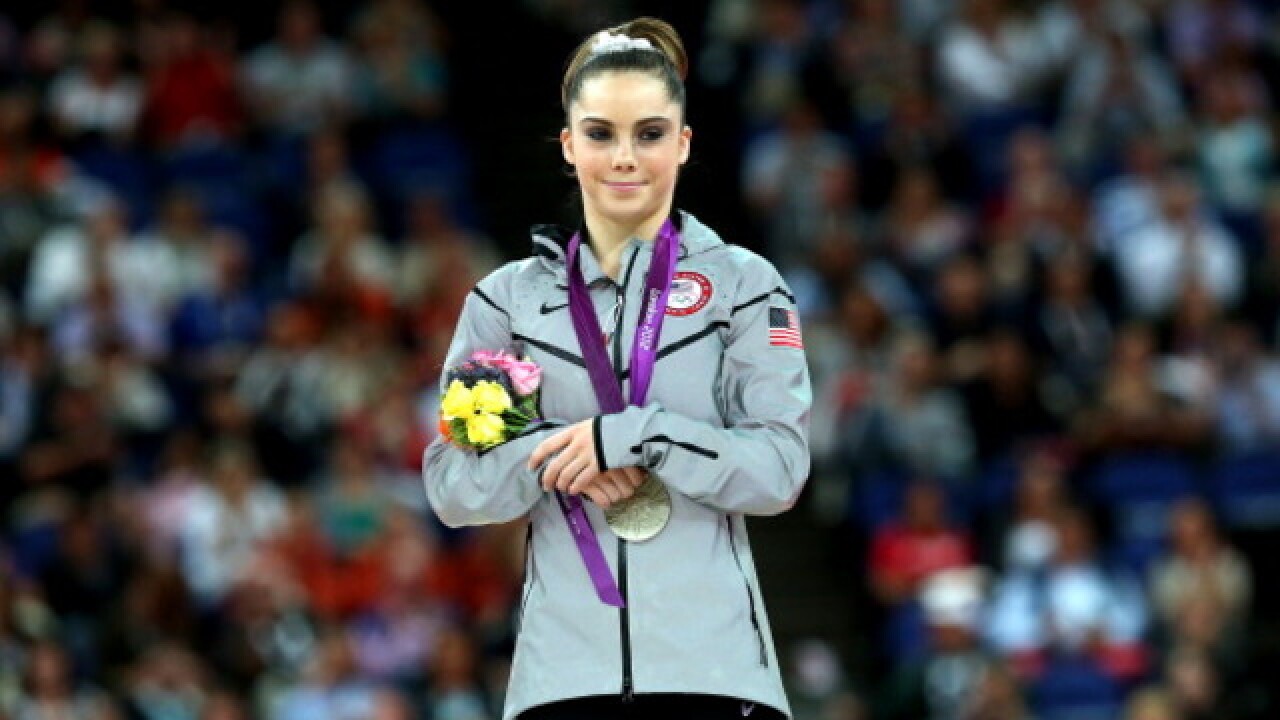 Image copyright 2012 Getty Images. All rights reserved. This material may not be published, broadcast, rewritten, or redistributed.
Ronald Martinez
<p>LONDON, ENGLAND - AUGUST 05: Mc Kayla Maroney of the United States stands on the podium with her silver medal during the medal ceremony following the Artistic Gymnastics Women's Vault final on Day 9 of the London 2012 Olympic Games at North Greenwich Arena on August 5, 2012 in London, England. (Photo by Ronald Martinez/Getty Images)</p>

In her Los Angeles County Superior Court, Maroney, a Long Beach native and one of the nation's best-known Olympic athletes, accused the USOC of covering up its knowledge of Nassar's misconduct as part of a "culture and atmosphere that conceals known and suspected sexual abusers."

"Despite her overwhelming drive and talent, which promulgated in her success, Maroney was being serially molested by Nassar before, during and after trainings and competitions," the suit alleges.

The USOC and USA Gymnastics could not immediately be reached for comment.

In October, the gymnast joined a chorus of women coming forward with claims of sexual abuse in the wake of the Harvey Weinstein scandal, claiming she was molested beginning at age 13 by Nassar.

Nassar has been sued by dozens of women claiming he abused them.

In a Twitter post, Maroney, now 21, said the outpouring of women in recent days joining the online #MeToo movement aimed at showing the wide scope of sexual harassment inspired her. The campaign began following revelations of sexual harassment and abuse allegations against Weinstein, a Hollywood film producer.

"I know how hard it is to speak publicly about something so horrible and so personal because it's happened to me too," Maroney wrote. "People should know that this is not just happening in Hollywood. This is happening everywhere. Wherever there is a position of power, there seems to be potential for abuse. I had a dream to go to the Olympics, and the things that I had to endure to get there were unnecessary, and disgusting.

"I was molested by Dr. Larry Nassar, the team doctor for the U.S. Women's National Gymnastics Team, and Olympic Team. Dr. Nassar told me that I was receiving 'medically necessary treatment that he had been performing on patients for over 30 years.' It started when I was 13 years old, at one of my first National Team training camps, in Texas, and it didn't end until I left the sport (in 2015)," she wrote. "It seemed whenever and wherever this man could find the chance, I was 'treated.' It happened in London before my team and I won the gold medal, and it happened before I won my silver."

Maroney won a silver medal in the vault competition, and won the team gold during the 2012 Olympics in London.

"For me, the scariest night of my life happened when I was 15 years old. I had flown all day and night with the team to get to Tokyo. He'd given me a sleeping pill for the flight, and the next thing I know, I was all alone with him in his hotel room getting a 'treatment.' I thought I was going to die that night," Maroney wrote.

"The Olympics is something that brings people hope and joy. It inspires people to fight for their dreams because anything is possible with hard work and dedication. I remember watching the 2004 Olympics. I was 8 years old, and I told myself that one day I would wear that red, white and blue leotard, and compete for my country. Sure, from the outside looking in, it's an amazing story. I did it. I got there, but not without a price.

"Things have to change, but how do we begin? I'm no expert but here are my thoughts:

"One: Speaking out, and bringing awareness to the abuse that is happening.

"Two: People, institutions, organizations, especially those in positions of power, etc., need to be held accountable for their inappropriate actions and behavior.

"Three: Educate, and prevent, no matter the cost.

"Four: Have zero tolerance for abusers and those who protect them.

"Is it possible to put an end to this type of abuse? Is it possible for survivors to speak out, without putting careers, and dreams in jeopardy? I hope so.

"Our silence has given the wrong people power for too long, and it's time to take our power back.

"And remember, it's never too late to speak up."