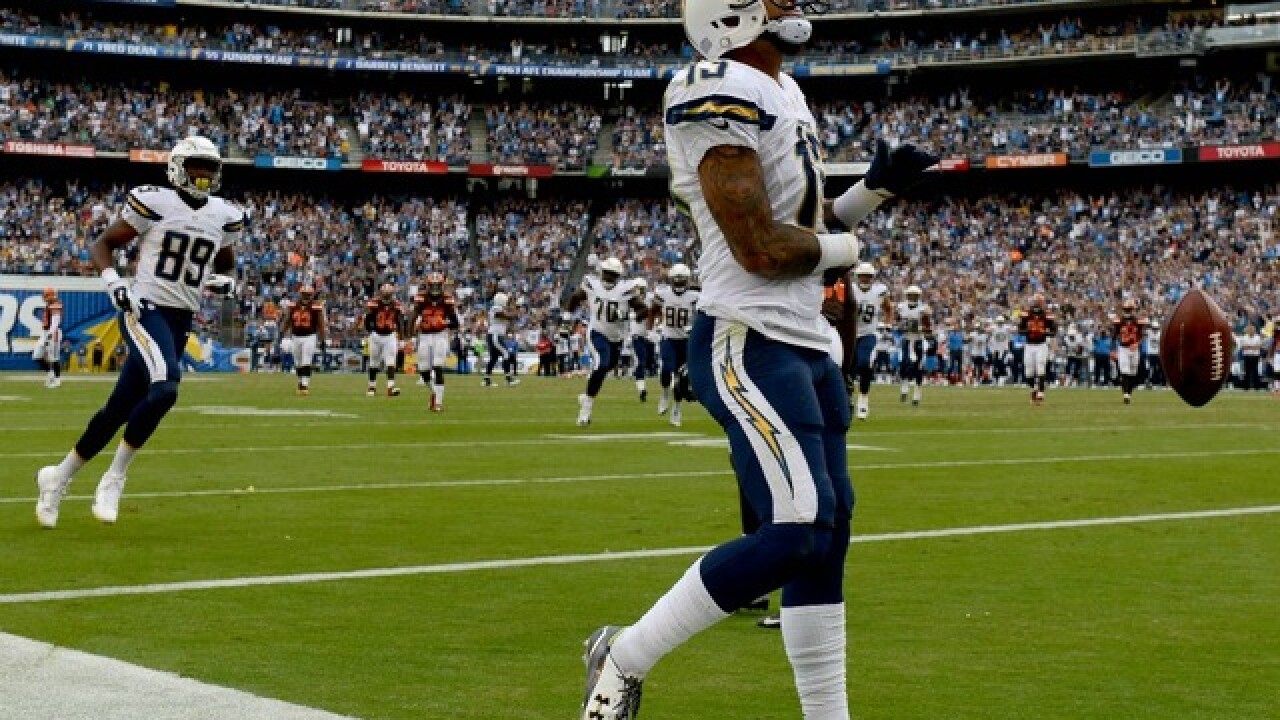 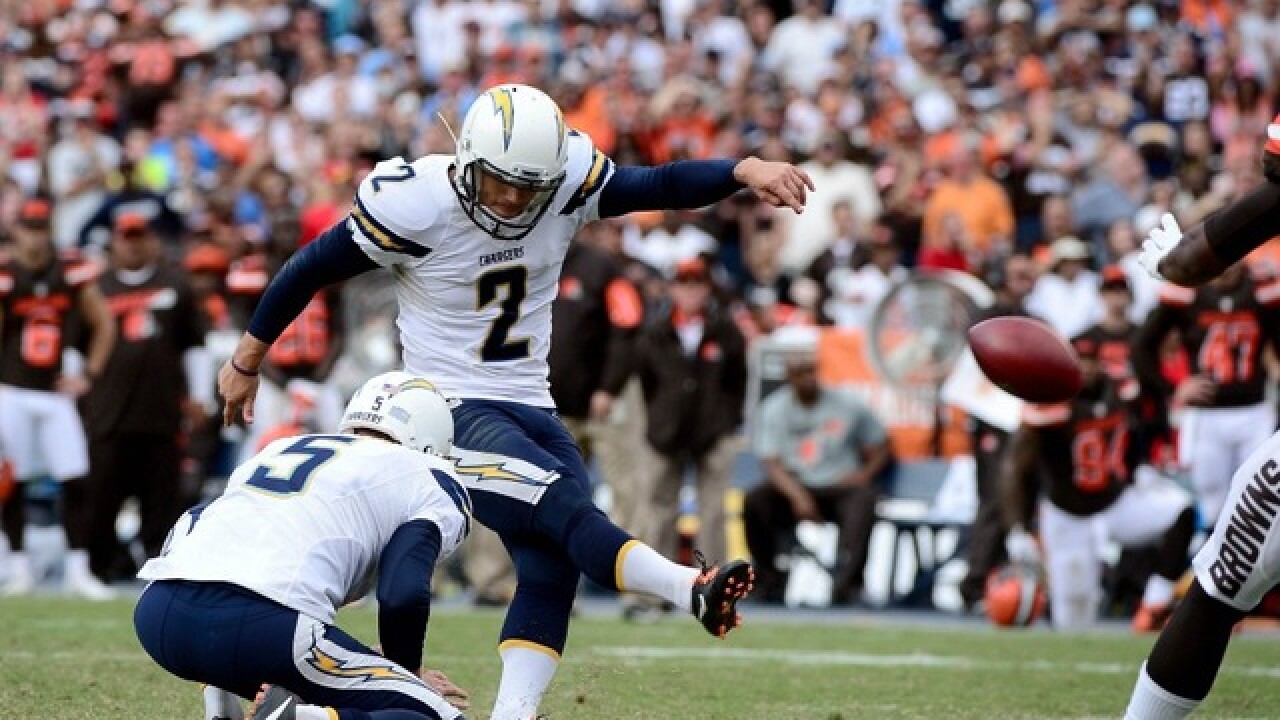 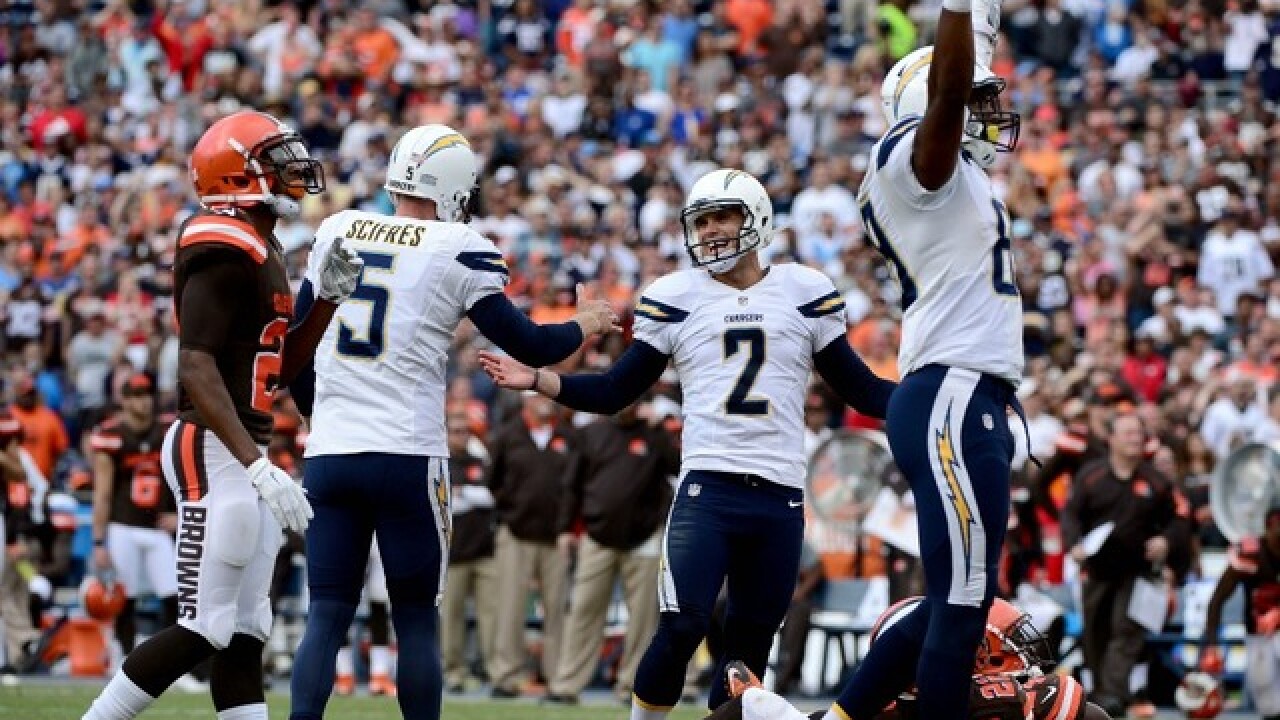 Given a second chance because of a penalty, Lambo kicked a 34-yard field as time expired to lift the Chargers to a 30-27 victory against the Cleveland Browns on Sunday.
"Thankfully I got a second chance," said Lambo, who beat out veteran Nick Novak for the job. "I missed the first one and I just started laughing. Then I saw a flag on the field and said. 'Oh, OK, let's try again.' Fortunately I had second chance."
Lambo got that second chance because Cleveland's Tramon Williams was whistled for being offside on Lambo's 39-yard attempt, which he pushed wide right.
The winning kick preserved another sensational effort by Rivers, who threw for 358 yards and three touchdowns.
"I saw the offside so I didn't have much of a reaction on the first one," Rivers said of Lambo's kick. "I knew he was going to get a re-do. He stepped up. That will be big for his confidence, too. That was big for him early in his career because we are going to need him down the stretch."
Said Cleveland coach Mike Pettine: "That's when you're in a desperation block situation. It's a very makeable field goal so you just say, 'Yeah, I got to try to time it up the best I can."
Here are some things that stood out in the Chargers' win:
RIVERS ROLLS: The veteran QB completed 23 of 38 passes. Working behind a makeshift line because of injuries, Rivers threw TD passes of 28 yards to Keenan Allen in the first quarter, 19 yards to Ladarius Green for the go-ahead score in the third quarter and a 1-yarder to John Phillips in the fourth. "It was just a scrappy game," Rivers said. "I don't know if it was our best game, but it was enough. To go to 1-3 with what we have coming up; to win, it was big." The Chargers host the Pittsburgh Steelers a week from Monday night and then travel to Green Bay.
O LINE: The Chargers were playing without three offensive line starters, left tackle King Dunlap, left guard Orlando Franklin and center Chris Watt.
MCCOWN COMES ON: Cleveland quarterback Josh McCown needed a big game to quiet critics who thought Johnny Manziel should be starting. McCown was 32 of 41 for 356 yards and two scores. The Browns had tied it at 27 on Josh McCown's 1-yard pass to Gary Barnidge with 2:09 to play and a 2-point conversion pass to Taylor Gabriel. That score was set up when the Browns won a challenge of McCown's 19-yard pass to Barnidge that originally was ruled incomplete. "You come home with a loss, it doesn't reflect the effort that was put into that game," he said.
CHARGERS DEFENSE: Criticized for having only one sack in the first three games, San Diego dropped McCown four times, including twice by Jerry Attaochu and 1 1/2 times by Melvin Ingram.
NO-GO BOWE: Browns wideout Dwayne Bowe dropped the only pass he was thrown. He has sat out two games with a hamstring injury and has yet to catch a pass after the team signed him to a two-year, $12.5 free agent contract, with $9 million guaranteed.
Associated Press 2015