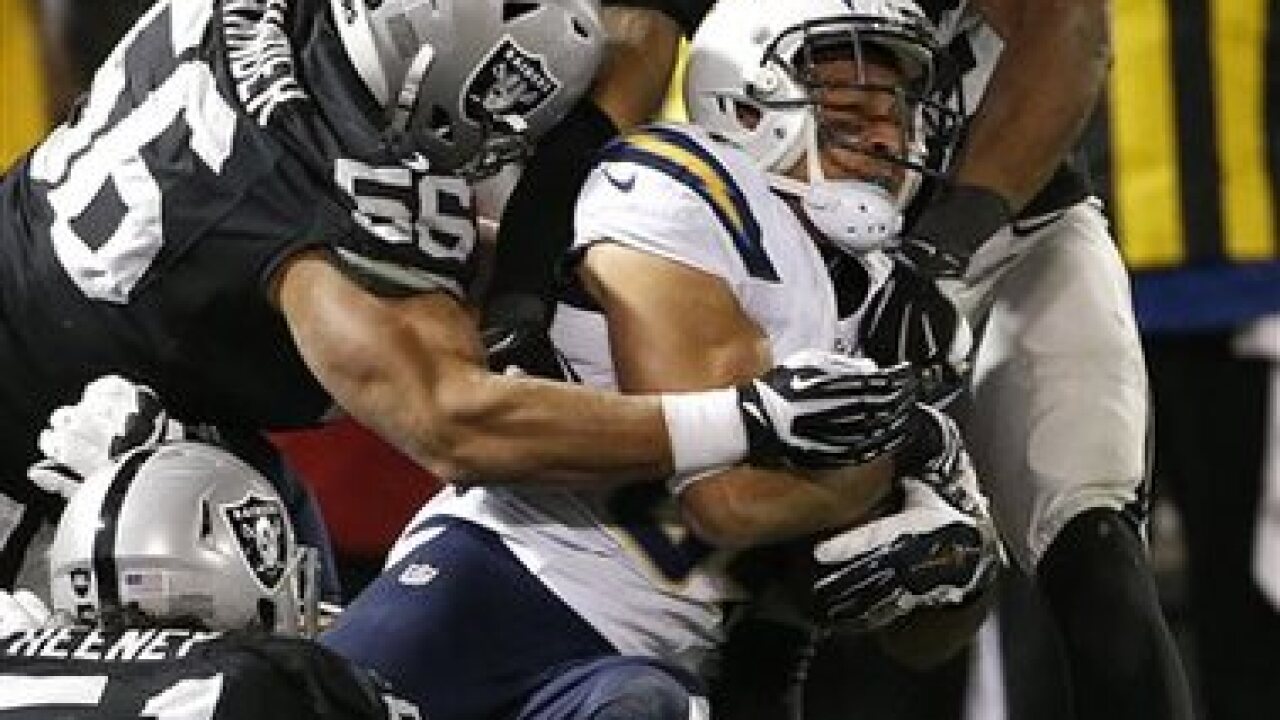 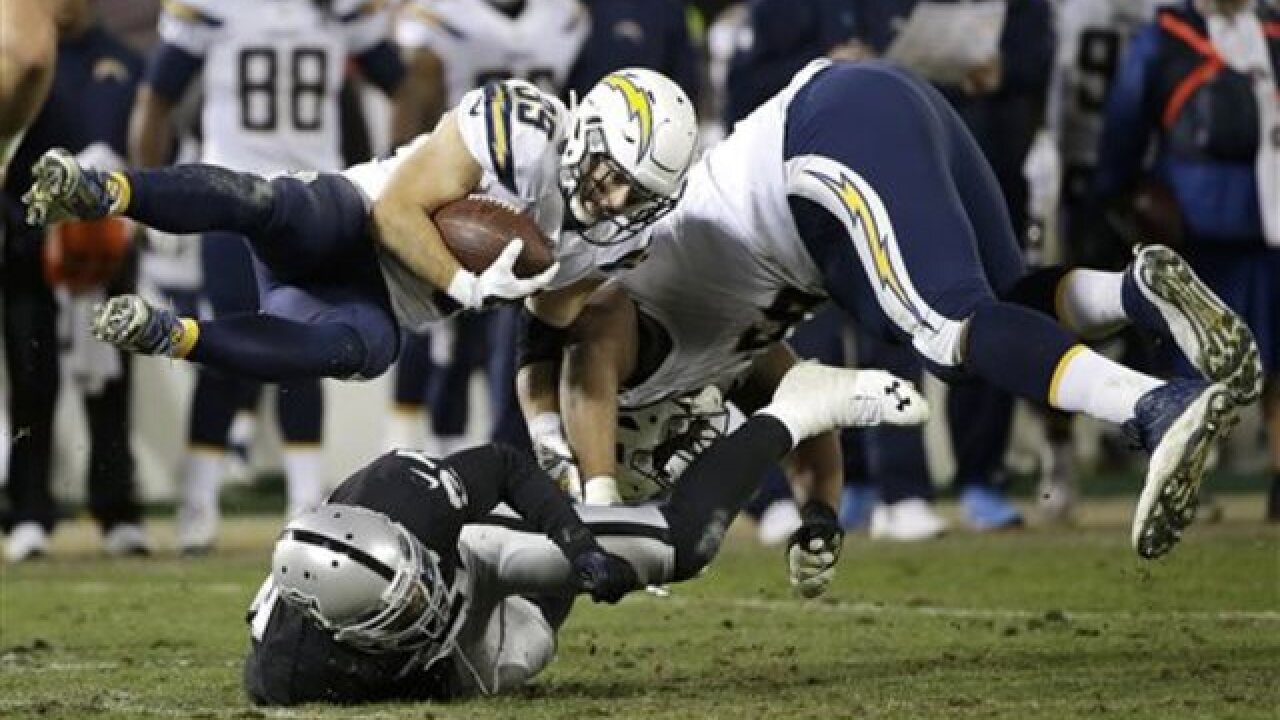 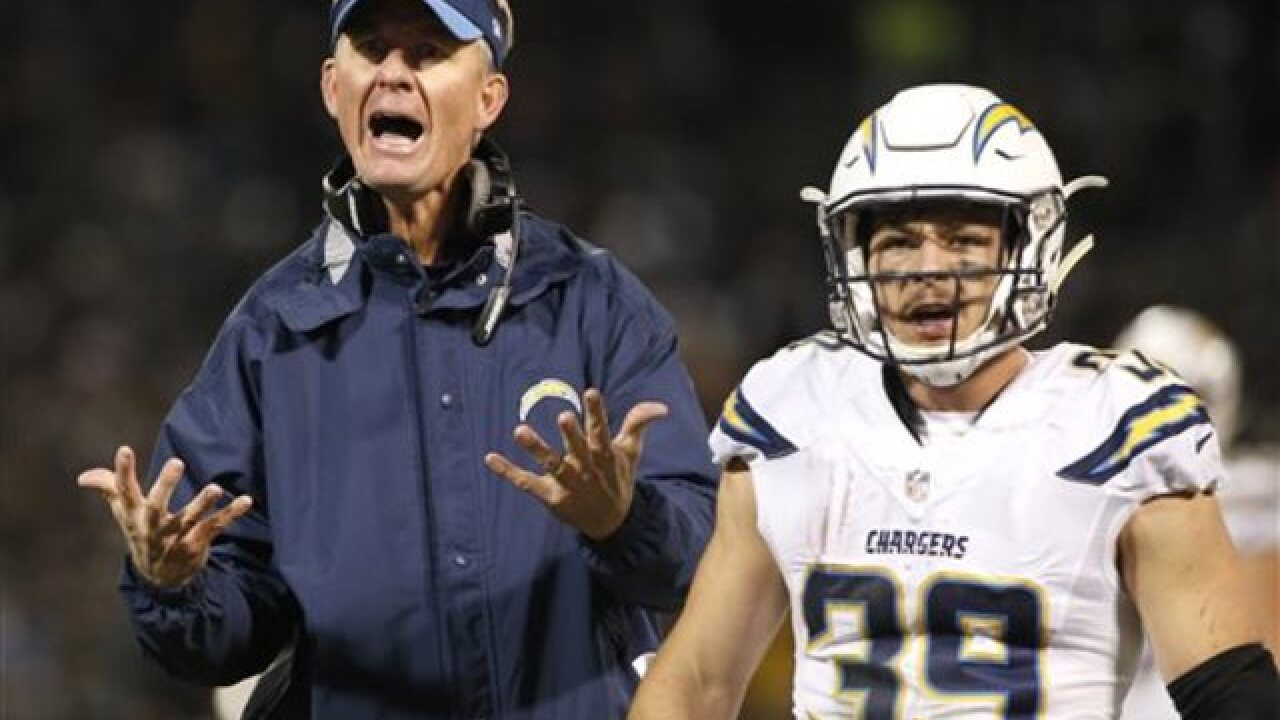 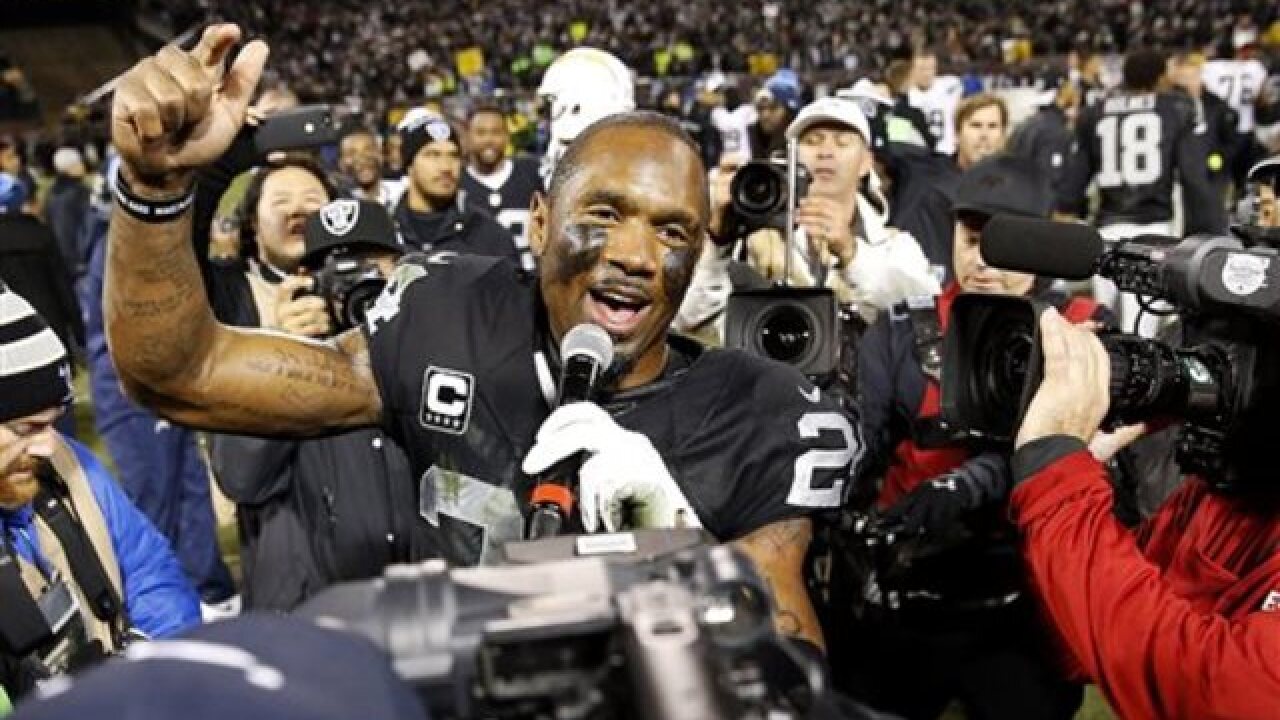 OAKLAND, Calif. -- Philip Rivers' last pass fell incomplete near Charles Woodson's feet and the celebration began. Woodson got a Gatorade shower and then led the fans in a chant of "Rai-ders! Rai-ders!"
What was Woodson's final game in Oakland — and might have been the last for the Raiders as well — was far from pretty but it ended in a victory.
Sebastian Janikowski kicked a 31-yard field goal in overtime and the Raiders got a defensive stop to seal a 23-20 victory over the San Diego Chargers on Thursday night.
"I guess it had to end like that," Woodson said. "It was a little much for me. I would have rather it had been a lopsided victory and we blew them out. That's the way it goes sometimes."
Derek Carr threw a touchdown pass and led the winning overtime drive for the Raiders (7-8), who could be moving to the Los Angeles area after the season. It also made Woodson a winner in his final home game with the Raiders before retiring after his 18th NFL season.
"This is my last game in the Coliseum but just know I'll never leave you," Woodson told the crowd. "Go Raiders!"
The Raiders won despite 15 penalties, including five on their overtime drive, and being held to one first down of the second half on a 3-yard touchdown drive.
But Oakland did move the ball in overtime after winning the toss. Three straight penalties left the Raiders with a second-and-29 but San Diego's Denzel Perryman bailed them out when he was called for a personal foul for hitting a defenseless Michael Crabtree in the head.
Seth Roberts then made a juggling 33-yard catch and run to put the Raiders on the 10. After Woodson lost 3 yards on a reverse when San Diego covered a possible pass to Carr in the end zone, Janikowski hit the go-ahead field goal.
"Charles is one of the greatest players to ever put on a uniform," coach Jack Del Rio said. "He's a great Raider. To be able to send him out the right way, to be able to cap off a special evening like this, our last home game of the year ... I'm just really proud of the effort."
The Chargers (4-11) were unable to muster a first down and lost their seventh straight division game. Rivers threw for 277 yards and a TD for San Diego, also possibly on the move to the Los Angeles area.
"It's been the story of the year, just losing close games," Rivers said. "Doesn't make it any easier losing another one like that."
The Raiders had done nothing offensively for most of the night when the defense gave them a needed spark. Malcolm Smith forced a fumble on a catch by David Johnson, and Benson Mayowa returned it 41 yards to the 3.
Carr hit Crabtree on the next play for the go-ahead touchdown with 4:42 to go. Carr added a 2-point conversion to Roberts to make it 20-17.
The Chargers tied it on Josh Lambo's 47-yard field goal with 55 seconds to play.
It was a night of goodbyes as Woodson played his final home game with the Raiders after announcing his retirement earlier in the week. Woodson got a loud ovation as he was introduced last with the defensive starters and was the only Oakland captain for the pregame coin toss.
While Woodson's future is determined, the team's remains in flux. Raiders owner Mark Davis and Chargers owner Dean Spanos are seeking to partner on building a stadium in Carson. The Rams are looking to build their own stadium in Inglewood as well and the league will likely decide in January which teams — if any — will be allowed to move.
Some fans came with "Stay in Oakland" signs in hopes that the team does not leave the Bay Area for the second time. The Raiders moved from Oakland to Los Angeles following the 1981 season and then returned in 1995.
The Raiders hardly provided a memorable game if this was the Oakland finale as both offenses struggled for much of the game. The third quarter was particularly bad with the teams combining for seven punts and one safety when Denico Autry sacked Rivers in the end zone on eight drives.
The sloppy play continued in the fourth quarter when San Diego was called for unsportsmanlike conduct after an incomplete pass on third down. That backed the Chargers to the 35 but Lambo made a 53-yard field goal.
Oakland's Khalil Mack was called for holding on the play and Chargers coach Mike McCoy opted to take the penalty instead of the three points. That seemed to pay off when Rivers appeared to hit Ladarius Green for a 30-yard touchdown pass on the next play. But the catch was wiped out on replay review and Lambo eventually missed a 48-yard field goal, keeping the Chargers lead at 17-12.
NOTES: Raiders WR Amari Cooper was limited by a sore foot on the short week. ... San Diego lost several players to injuries, including CB Jason Verrett (hamstring), Eric Weddle (groin), OL Orlando Franklin (concussion) and C Trevor Robinson (concussion).
Associated Press 2015