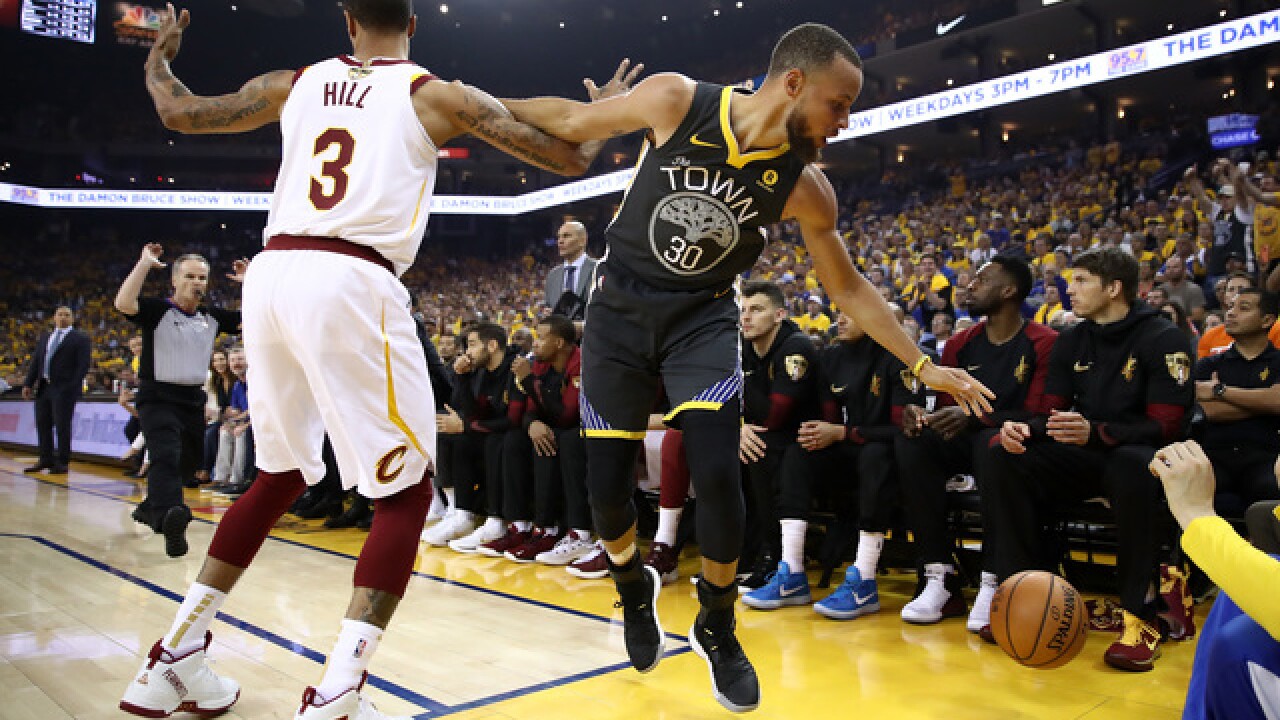 Copyright 2018 Scripps Media, Inc. All rights reserved. This material may not be published, broadcast, rewritten, or redistributed.
Ezra Shaw
<p>OAKLAND, CA - JUNE 03: Stephen Curry #30 of the Golden State Warriors and George Hill #3 of the Cleveland Cavaliers battle for posession of the ball during the first half in Game 2 of the 2018 NBA Finals at ORACLE Arena on June 3, 2018 in Oakland, California. NOTE TO USER: User expressly acknowledges and agrees that, by downloading and or using this photograph, User is consenting to the terms and conditions of the Getty Images License Agreement. (Photo by Ezra Shaw/Getty Images)</p>

CLEVELAND (AP) -- For LeBron James, losing is no longer an option.

With Cleveland down 2-0 to Golden State in the NBA Finals, James knows better than anyone that he and the Cavaliers are facing a must-win situation in Game 3 on Wednesday night at Quicken Loans Arena.

No team has ever come back from a 3-0 deficit to win a playoff series. James acknowledged the Cavs are facing a "tall task" as it is against the Warriors, who are seeking their second straight title and third in four years.

Stephen Curry made nine 3-pointers in Golden State's Game 2 win, and the Warriors, who live by a "Strength In Numbers" slogan, could get back forward Andre Iguodala for Game 3. Iguodala has missed the past six games but Coach Steve Kerr says he will warm up with the intention of playing in Game 3.

Iguodala's return would be another big boost for the Warriors, who lead the Cleveland Cavaliers 2-0 in this title series and now get the 2015 NBA Finals MVP back into their rotation.

Game 3 of the NBA Finals gives Cleveland an opportunity for its ninth consecutive home playoff win, which would be a franchise record.

There are also some milestones awaiting LeBron James in Game 3.

When he takes the floor, it'll be for the 238th playoff game of his career. That will give him outright possession of fourth place in NBA history, breaking his tie with Kareem Abdul-Jabbar in that category.

And if he scores 30 in Game 3 — or any postseason game for the rest of his career — he will break a tie with Michael Jordan for the most 30-point playoff games in league history. James and Jordan both have scored at least that many 109 times in playoff games.

Golden State's Draymond Green is about to break one of Wilt Chamberlain's records.

No one in Warriors history has more postseason rebounds than Chamberlain, who grabbed 922 in his time with the Philadelphia and San Francisco Warriors. Green has 921 playoff rebounds so far in his career.

Of course, it bears noting that Chamberlain grabbed his in only 36 games.

Wednesday night's Game 3 of the NBA Finals will be the 100th playoff game of Green's tenure with Golden State. He'll be the second Warrior to play in 100 postseason contests, joining only Klay Thompson.

And if Stephen Curry makes one 3-pointer in Game 3, he will become the first player in NBA history with a 3-pointer in 43 consecutive playoff road games. He's currently tied with Reggie Miller as the only shooters to do that in 42 straight postseason contests away from home.