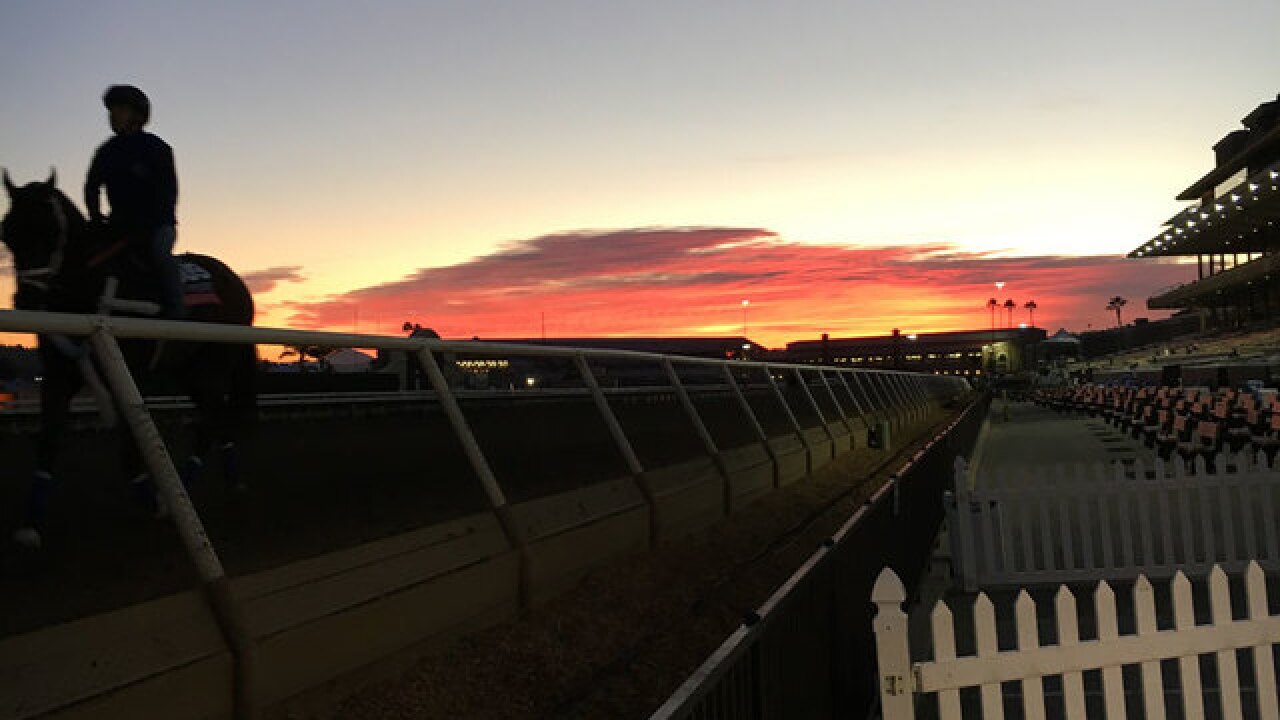 Breeders' Cup officials have capped attendance at 37,500 per day, along with adding 900 temporary box seats and two temporary trackside chalets.

"I'm not all about large numbers of people,"" said Craig Fravel, the Breeders' Cup president and CEO and a former Del Mar president and general manager.

"Large numbers of people at the right place are great. You want to be able to deliver service to people and make a unique championship event ... There are going to be a lot of people here ... that haven't been to Del Mar so it's a really special thing to see."

Trainer Mark Casse, who has seven horses entered in the Breeders' Cup, is among those who say they'll enjoy having the prestigious racing event at Del Mar.

"I told everybody when a trainer dies and goes to heaven, this is where they go -- Del Mar," Casse said.

Chad Summers, who trains the sprinter Mind Your Biscuits, noted that he was initially concerned that there weren't any horses at Del Mar for six to seven weeks because of a county fair and music festivals before the track re-opened for training.

"This is a sport where everybody complains about everything so the fact that you haven't heard one bad thing from anybody is huge," he said Wednesday.

The Dirt Mile, Juvenile Turf and Juvenile Fillies Turf, which each have purses of $1 million, and the $2 million Distaff will be run Friday.

Stellar Wind, the 5-2 morning line favorite for the Distaff, is undefeated this year and has never lost in three starts at Del Mar.

The 5-year-old mare finished second and fourth in her first two tries in the Distaff, but trainer John Sadler said he is hoping she'll win this time around in "the one that really counts for her" as she wraps up her racing career.

Forever Unbridled, Elate and Romantic Vision are coming into the Distaff off two consecutive victories, while Kentucky Oaks winner Abel Tasman, 2016 Breeders' Cup Juvenile Fillies winner Champagne Room and Santa Anita Oaks winner Paradise Woods are also in the field along with Mopotism,who has racked up more starts in her career than the other 3-year-old fillies in the race.

Sadler called it a tough field with "top-class horses," noting that there are "some 3-year-old fillies that are really emerging" and could be "huge stars" next year.

Mor Spirit -- the 3-1 morning line favorite for the Dirt Mile -- is coming off a nearly five-month layoff following a three-race winning streak that culminated with a dominating performance in June's Metropolitan Handicap at Belmont Park in Elmont, New York.

He'll face off against a field that includes his stablemate, Cupid, along with Kelso Handicap winner Sharp Azteca and San Diego Handicap victor Accelerate, who beat 2016 Breeders' Cup Classic winner Arrogate in the San Diego Handicap at Del Mar in July.

Gun Runner, the 9-5 morning line favorite, comes into the $6 million Classic with four wins and a second in five starts this year and the No. 1 ranking in the National Thoroughbred Association's Top Thoroughbred Poll.

Trainer Steve Asmussen said the 4-year-old colt is "considerably faster" than last year, when he finished second in the Breeders' Cup Dirt Mile.

"I'm greatly appreciative of this opportunity," he said. "It's obviously a very special running of the Classic."

Gun Runner will be pitted against four horses from Hall of Fame trainer Bob Baffert's barn, including Arrogate, who won the Classic in 2016 and handed Gun Runner his only defeat this year in the $10 million Dubai World Cup in March.

Baffert's other entries are Collected, who beat Arrogate in their last start in the Pacific Classic at Del Mar in August; West Coast, who has a five- race win streak, and Mubtaahij, who won his first start for his new trainer in the Awesome Again at Santa Anita in September.

Rounding out the Classic field are: Churchill and War Decree, who were shipped over from Europe by veteran trainer Aidan O'Brien; Fountain of Youth winner Gunnevera, Smarty Jones victor Pavel; Brooklyn winner War Story and the gray, Win the Space, who was third in the Awesome Again.

During a recent conference call, Baffert called the Classic "a pretty deep field," saying "there are some good horses in there."

Saturday's other races are:

-- the $2 million Breeders' Cup Juvenile featuring 9-5 morning line favorite Bolt d'Oro, who has a perfect three-for-three record, including two wins at Del Mar. The 2-year-old colt is owned and trained by Mick Ruis, who said he thinks it's "awesome" that the race is in San Diego County, where he was born and raised.

"We're going to have a lot of local family (members) and friends here," Ruis said.

Bolt d'Oro's rivals will include The Tabulator, who is also unbeaten in three starts.

-- the $2 million Breeders' Cup Filly and Mare Turf, with Lady Eli as the 5-2 morning line favorite.

The 5-year-old mare successfully battled laminitis after stepping on a nail, returning to the races in 2016 with a win and two second-place finishes, including a loss by a nose in the Filly and Mare Turf to Queen's Trust, whom she will face again this year.

"Lady Eli is a very special horse to me and my entire staff and her owners for all she's overcome, for her incredible talent that she has and so many places she's brought us together," her trainer, Chad Brown, said during a recent conference call.

"I've never seen one up close with this much heart and determination and I just hope everyone has the opportunity to be close to a horse like this some time in their lives."

-- the $4 million Breeders' Cup Turf, which will include defending champion, Highland Reel, and the 7-2 morning line favorite Ulysses, who has finished in the top three in all six of his starts this year in Europe.

-- the $2 million Breeders' Cup Mile, in which the Irish-bred Ribchester was made the 7-2 morning line favorite.

-- the $1.5 million Breeders' Cup Sprint, in which another of Baffert's horses, Drefong, will attempt to defend his title as the 5-2 morning line favorite.

-- the $1 million Breeders' Cup Filly and Mare Sprint, in which the California-based Unique Bella will try to keep her perfect record this year intact. The 9-5 morning line favorite is five-for-five this year, with only one loss in her career. Her rivals will include last year's winner, Finest City.

-- the $1 million Breeders' Cup Turf Sprint, in which the 5-2 morning line favorite Lady Aurelia is set to take on 11 rivals of both sexes.

-- the $2 million Breeders' Cup Juvenile Fillies, in which the 7-2 morning line favorite is Moonshine Memories, who is unbeaten in three starts, including two at Del Mar.