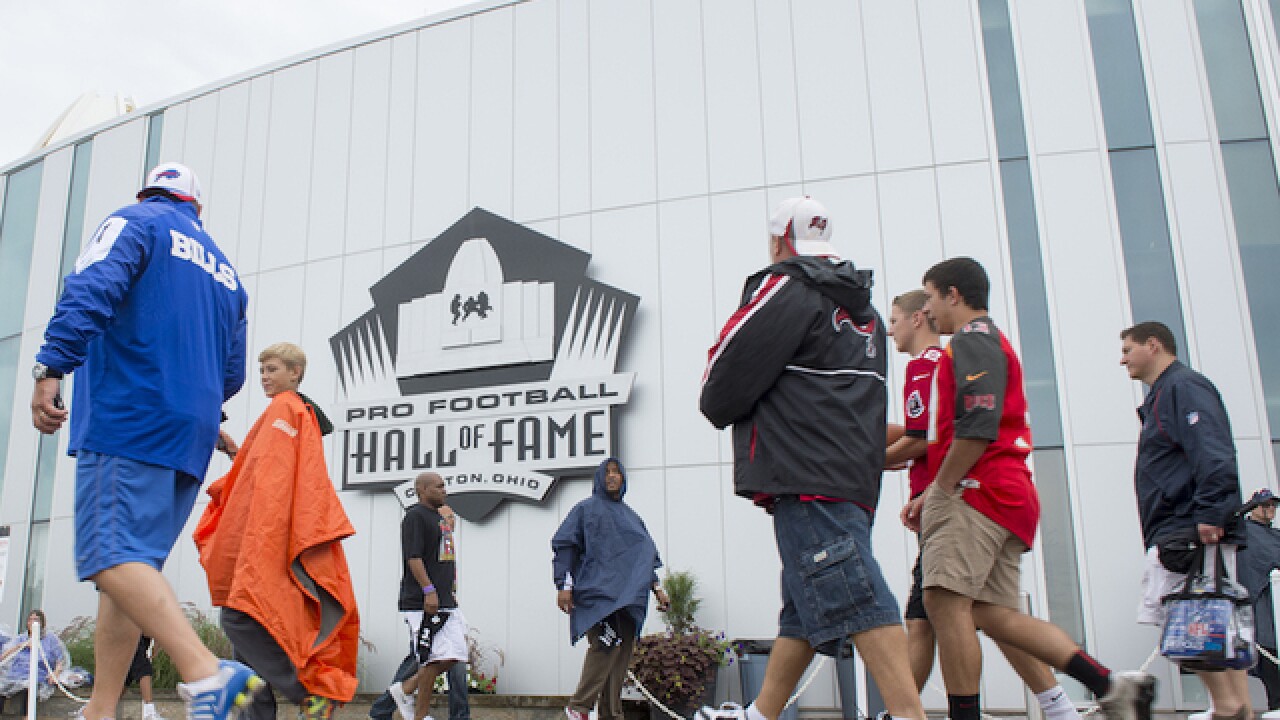 Copyright Getty Images
Jason Miller
<p>Fans enjoy the Hall of Fame prior to the NFL Class of 2014 Pro Football Hall of Fame Enshrinement Ceremony at Fawcett Stadium on August 2, 2014 in Canton, Ohio. </p>

The group was announced during the taping of NFL Honors, a two-hour prime-time awards special held at the Cyrus Northrop Memorial Auditorium at the University of Minnesota. The group will be enshrined in Tom Benson Hall of Fame Stadium in August.

Moss is the first wide receiver to be elected in his first year on the ballot since Jerry Rice. In his career, which spanned 14 seasons, Moss had 982 receptions for 15,292 yards and 156 touchdowns and led the NFL in touchdown receptions five times. He also set the NFL record with 23 touchdown receptions in 2007 with the Patriots.

"I started this game at 6 years old and never imagined that I'd be here, putting on a Hall of Fame jacket," Moss said.

Owens, a previous snub, made it in his third year of eligibility. He noticeably was absent from NFL Honors on Saturday, opting instead, according to the Fort Worth Star-Telegram, to play basketball in Los Angeles.

"He was very calm, very respectful and kind of humble about it," Pro Football Hall of Fame President David Baker said when describing Owens' reaction when he got the phone call.

After a 16-year career, Owens finished with 1,078 receptions for 15,934 yards -- the second-highest yardage total in NFL history -- and 153 touchdowns, the third most. He also led the NFL in TD catches three times.

Owens previously had voiced his displeasure at not being elected, tweeting this time last year, "HOF is a total joke" when he didn't get in. This year, though, Owens celebrated with a post on Instagram, reading, "CONGRATS to the HOF CLASS OF 2018. We're GOLDEN!"

Lewis: 'I want to go fishing with a cigar'

Lewis, a first-time finalist, played for the Baltimore Ravens from 1996 to 2012. He was twice named AP defensive player of the year and won two Super Bowls, earning MVP honors in Super Bowl XXXV.

"Now I can finally rest," Lewis said. "I want to go fishing with a cigar now and just sit back. I don't want to work out every day now."

Another first-time finalist, Urlacher spent his entire career with the Chicago Bears from 2000 to 2012. He won a defensive rookie of the year award and in 2005 was named defensive player of the year.

"I'm glad I didn't have to vote, because it would be really hard to pick," Urlacher said.

Dawkins, in his second year of eligibility, was a safety with the Eagles and the Denver Broncos, spanning 16 seasons. He helped the Eagles to eight playoff appearances and was a nine-time Pro Bowler. He is the first player in NFL history to record a sack, interception, fumble recovery and touchdown catch in same game, when he did it against the Houston Texans on September 29, 2002.

Dawkins called it "extremely gratifying" to be elected the same year the Eagles are in the Super Bowl.

"That's huge," Dawkins said. "That goes above anything I can think about besides being able to now call myself a Hall of Famer."

Kramer: 'It's something I was afraid to believe in'

Kramer, a senior finalist, played from 1958 to 1968, anchoring the offensive line of the Vince Lombardi-era Green Bay Packers. The right guard is remembered for a key block that made way for Bart Starr's game-winning touchdown in the famous "Ice Bowl." In his 45th year of eligibility, this was his 11th time as a finalist.

"There were 10 times I was waiting for a knock on the door that didn't come, so there wasn't a great deal of confidence that it was going to happen this time," Kramer said.

The first time he heard a knock Saturday? "It's the maid," he said. "So we gather ourselves."

The knock from Baker came later. "I was over the top," Kramer said. "It's something I was afraid to believe in, was afraid to hope for."

A first-time finalist, Brazile, a linebacker from 1975 to 1984 with the Houston Oilers, also was a senior finalist. He was selected to seven Pro Bowls and held the team record with 147 consecutive games played.

"I want to say thank you," Brazile said. "To the selection committee, thank you all."

Beathard: 'Never really had it as a goal'

"I worked all the years in the league and I never really had that as a goal or anything," Beathard said on the phone to reporters. "Never thought much about it. ... It's a real honor. I never dreamed about being in (the Hall of Fame)."

There were 18 finalists for this year's class, 15 of which are from the modern era. Of the 15, four were first-time finalists.

The Pro Football Hall of Fame's current bylaws stipulate that between four and eight new members are to be chosen each year. No more than five modern-era finalists can be elected in a given year.

To be eligible, modern-era players and coaches must have last played or coached more than five seasons ago. Contributors do not need to be retired to be eligible. Senior finalists are determined by the Seniors Committee, which reviews the qualifications of those players whose careers ended more than 25 years ago.

To be elected, a finalist must receive a minimum positive vote of 80% during the annual selection meeting. This year's class was selected by a 48-person selection committee.

In addition to the Hall of Fame announcement, the NFL and the Associated Press named their annual award winners at NFL Honors. Patriots quarterback Tom Brady, at age 40, was named NFL MVP.

The Walter Payton NFL Man of the Year went to Texans defensive end J.J. Watt, who raised more than $37 million for people affected by Hurricane Harvey.