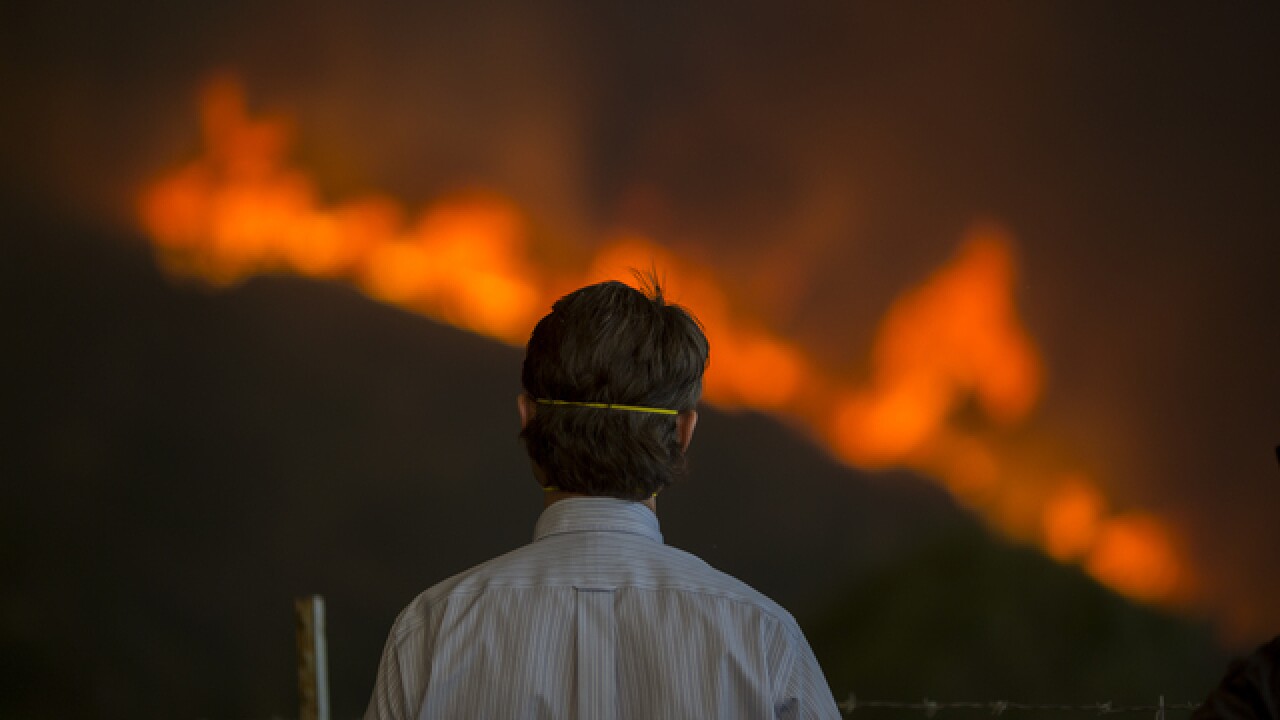 Image copyright 2018 Getty Images. All rights reserved. This material may not be published, broadcast, rewritten, or redistributed.
David McNew
<p>MALIBU, CA - NOVEMBER 09: A man watches approaching flames during the Woolsey Fire on November 9, 2018 in Malibu, California. About 75,000 homes have been evacuated in Los Angeles and Ventura counties due to two fires in the region. (Photo by David McNew/Getty Images)</p>

Huge plumes of smoke were rising again in the fire area, which stretches miles from the northwest corner of Los Angeles' San Fernando Valley to the Malibu coast.

Aircraft swooped low over flaming hills to drop lines of fire retardant as flames marched through brush lands on the edges of cul-de-sac communities.

A one-day lull in the dry, northeasterly winds ended at midmorning and authorities warned that the gusts would continue through Tuesday.

RELATED: Death toll hits 25 from wildfires at both ends of California

The lull allowed firefighters to gain 10 percent control of the so-called Woolsey fire, which has burned more than 130 square miles (335 square kilometers) in western Los Angeles County and southeastern Ventura County since Thursday.

Los Angeles County Fire Chief Daryl Osby stressed there were numerous hotspots and plenty of fuel that had not yet burned.

The count of destroyed homes remained at 177 but it was expected to increase. Osby noted that a November 1993 wildfire in Malibu destroyed more than 270 homes and said he would not be surprised if the total from the current fire would be higher.

The death toll stood at two. The severely burned bodies were discovered in a long residential driveway on a stretch of Mulholland Highway in Malibu, where most of the surrounding structures had burned. The deaths remained under investigation.

The deaths came as authorities in Northern California announced the death toll from a massive wildfire there has reached 23 people, bringing the statewide total to 25.

Progress was made on the lines of smaller fire to the west in Ventura County, which was 70 percent contained at about 7 square miles (18 square kilometers), and evacuations were greatly reduced. But thousands remained under evacuation orders due to the Woolsey fire.

Also injured was a well-known member of the Malibu City Council. Councilman Jefferson "Zuma Jay" Wagner was injured while trying to save his home, which burned down, Councilman Skylar Peak told reporters Sunday.

Peak said Wagner was hospitalized down the coast in Santa Monica and was expected to recover. Wagner runs Zuma Jay Surfboards, a longtime fixture on Pacific Coast Highway near the landmark Malibu Pier.

"I smelled the fire and didn't think, grabbed my dog and left," resident Lisa Kin said Sunday, tears in her eyes and her voice breaking. "It hasn't burned in decades and I knew we didn't stand a chance."

She described Seminole Springs as a "beautiful community" of families and older people who appreciate its tranquility. But she said she always feared a wildfire since she moved there 15 years ago, especially during recent years in which there's been almost no rain.

Santa Ana winds, produced by surface high pressure over the Great Basin squeezing air down through canyons and passes in Southern California's mountain ranges, are common in the fall and have a long history of fanning destructive wildfires in the region.

But fire officials say fire behavior has changed statewide after years of drought and record summer heat that have left vegetation extremely crisp and dry.

"Things are not the way they were 10 years ago ... the rate of spread is exponentially more than it used to be," said Ventura County Fire Chief Mark Lorenzen, urging residents to not put their lives at risk by trying to defend their own homes instead of evacuating.

That change has impacted the ability to move firefighting resources around the state, officials said.

With the devastation and loss of life in the Northern California fire, "it's evident from that situation statewide that we're in climate change and it's going to be here for the foreseeable future," he said.