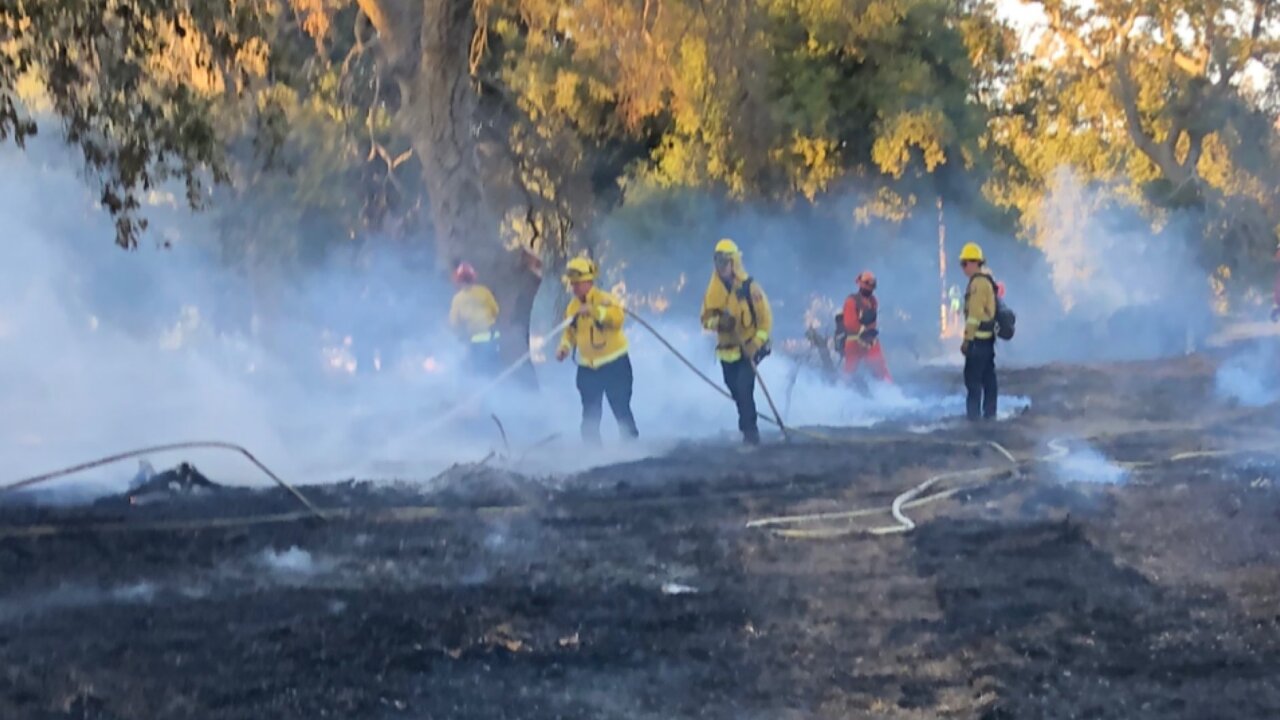 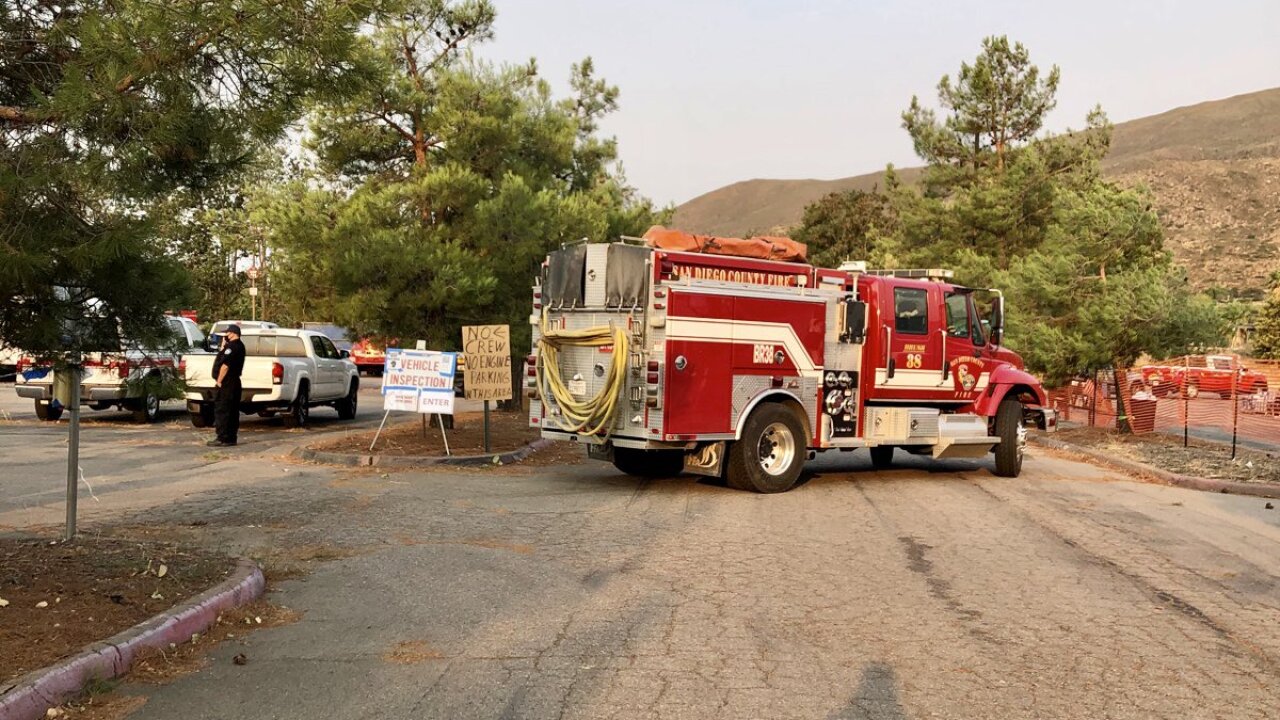 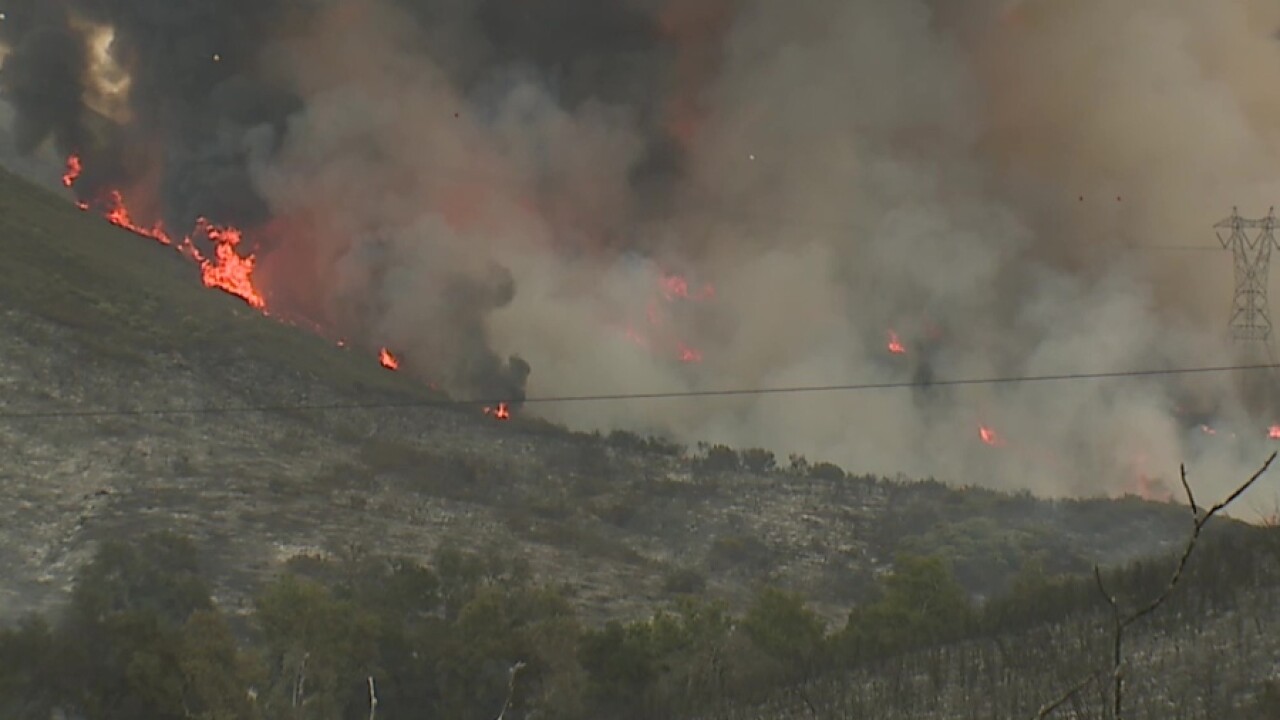 JAPATUL VALLEY, Calif. (CNS) - Firefighters labored for a sixth day Thursday to subdue a wildfire that has blackened thousands of acres in rural eastern San Diego County, leveling at least 30 homes and dozens of outbuildings and forcing widespread evacuations.

As of midday Thursday, crews had the sprawling burn area southeast of Alpine nearly one-third contained, according to Cal Fire. The personnel remained particularly focused on its western and northern flanks, where smoldering hot spots were posing the most immediate remaining structural threats, the state agency reported.

At last count, the conflagration, dubbed the Valley Fire, had destroyed 30 residences and 29 auxiliary structures and left two firefighters with minor injuries.

The blaze erupted for unknown reasons early Saturday afternoon off Spirit Trail and Carveacre Road in Japatul Valley and spread rapidly through tinder-dry vegetation amid sweltering heat and high winds, according to Cal Fire. More than 1,000 local, state, federal and military firefighters battled the blaze by ground and aboard firefighting aircraft, officials said.

As of late Thursday, crews had the perimeter of the wind-driven inferno 35% surrounded by fire breaks, the state agency reported. The fire has burned 17,665 acres.

Evacuation orders remained in effect Thursday afternoon for the back-country communities of Carveacre, Japatul Valley, Lawson Valley and Lyons Valley. Residents of Alpine, Barrett Junction, Descanso, Dulzura, Pine Valley, Potrero and Viejas were advised to be prepared to clear out of their homes on short notice if serious flare-ups occurred near their neighborhood.

"We would encourage everybody to stay out of those areas," sheriff's Lt. Tony O'Boyle told reporters during a briefing Thursday morning. "Just because you don't see smoke or flames doesn't mean there aren't hazards in there. And there are -- downed power lines, gas leaks, unstable boulders and hot spots."

Some roadways in and around the burn zone have been reopened to residents only, the lieutenant said.

Lakeside Rodeo Arena was available to shelter horses, and residents in need of a safe place to board pets or livestock until the wildfire was extinguished were advised to make use of one of two San Diego County Animal Services shelters, in Bonita and Spring Valley.

Fire-related power outages kept about 794 addresses in the vicinity of the blaze without electrical service Thursday, and possibly for several more days, according to SDG&E.

Due to smoke drifting over much of the county because of the blaze, the San Diego County Pollution Control District advised that air-quality levels were unhealthy in parts of the region and advised people to limit outdoor activities until conditions improve.

As the Valley Fire spread, Gov. Gavin Newsom declared a state of emergency for San Diego County, a move intended to free up federal relief funds.

On Wednesday afternoon, the county Board of Supervisors voted unanimously to ratify a local emergency proclamation issued Sunday in response to the Valley Fire. The action will provide monies to address damage resulting from the blaze and make the region eligible for potential federal and state resources that would help repair roadways and other public infrastructure, and reimburse emergency-response costs, according to county officials.

During Thursday's news conference at Viejas Casino Event Center, District 2 County Supervisor Dianne Jacob noted that firefighters had been aided by milder-than-expected weather, as "the anticipated fast and furious (Santa Ana) winds that we thought would be happening did not happen this time."

"Having said that, today is pretty much a good-news day," Jacob said. "But the fire is still burning, and it's not out yet, And we have not reached the peak of our fire season. Remember, that peak usually happens in October. ... So, this is just a warning shot, basically, of what we might be facing in the coming months. This is not over. It's just starting. We were lucky on this one."

Jacob urged East County residents to put together an emergency "go kit" of supplies in case of evacuation orders, as well as download the SD Emergency App and sign up for crisis notifications at ReadySanDiego.org.

She advised those who have lost their homes or other property to the wildfire to call the County Assistance Hotline at 858-715-2200 or email valleyfirerecovery.@sdcounty@ca.gov.

Additionally, a "one-stop shop" county assistance center for victims of the blaze will be operating at Rancho San Diego Library, 11555 Via Rancho San Diego, Jacob told reporters. The services will be available Saturdays and Sundays 10 a.m. to 6 p.m. and Mondays 11 a.m. to 7 p.m. until further notice.