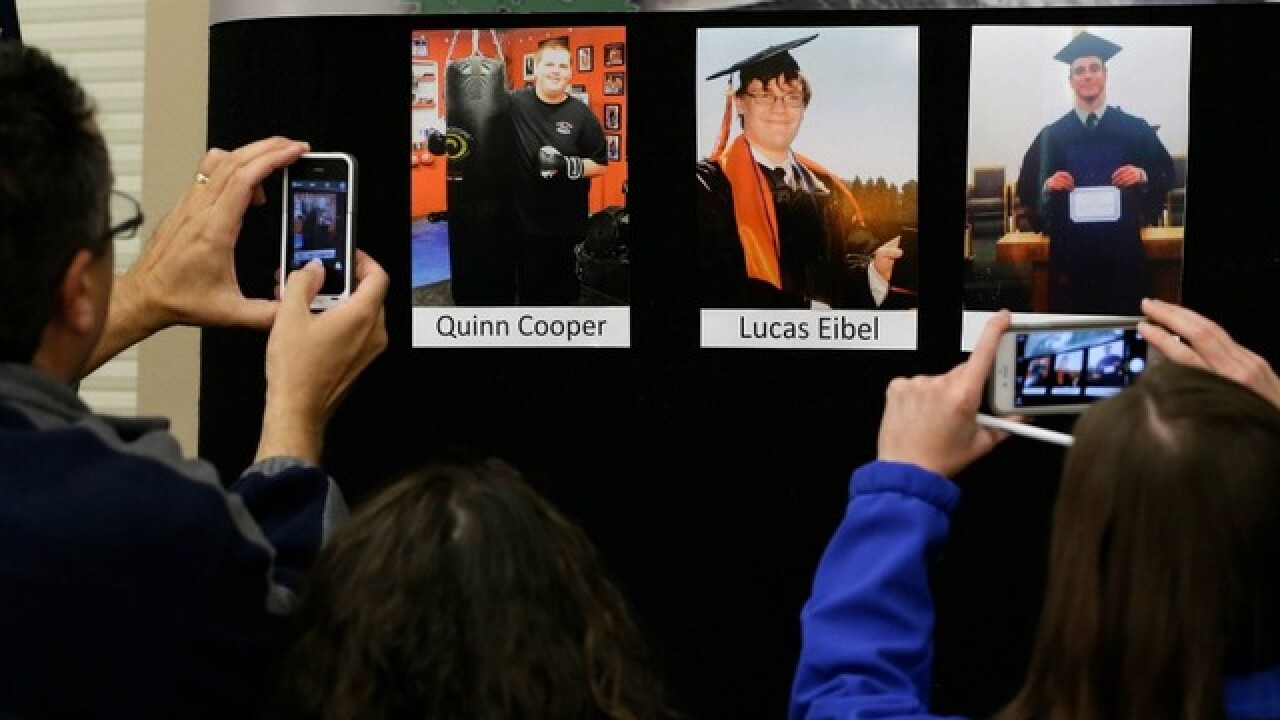 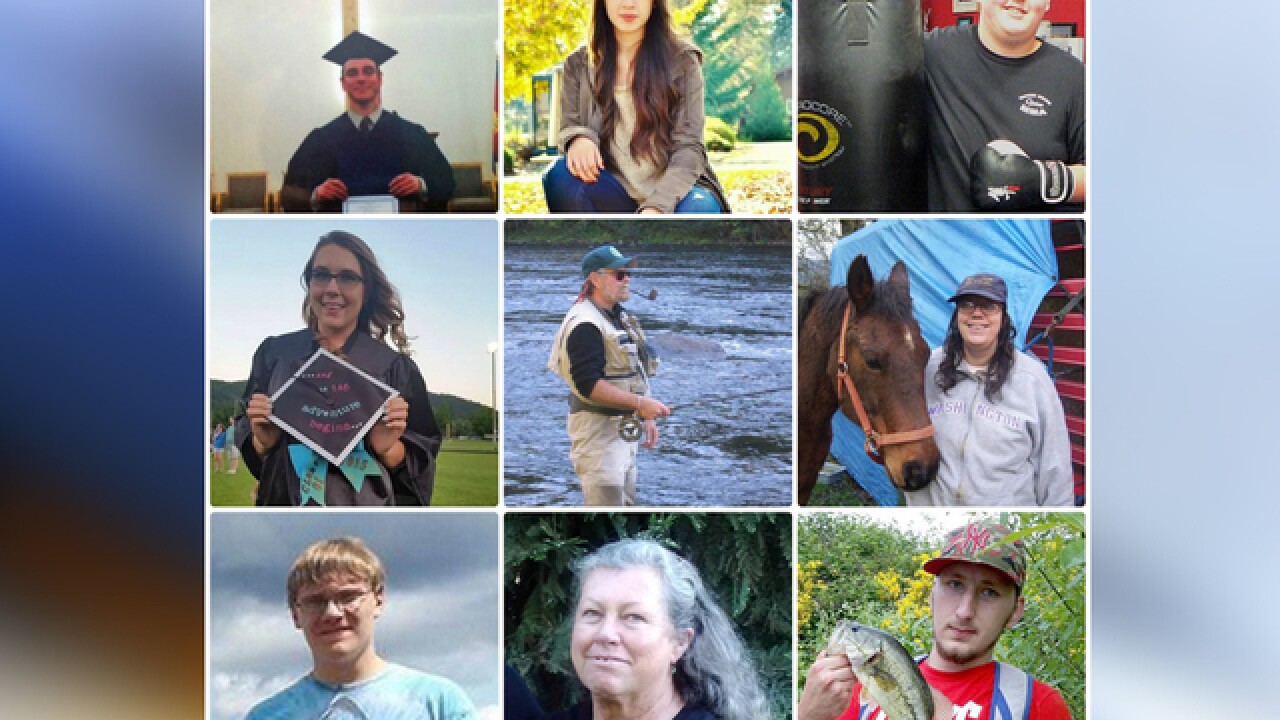 ROSEBURG, Ore. - The nine people killed after a gunman opened fire on an Oregon community college campus Thursday took different paths to the small rural college, ranging from teens starting college for the first time to adults who were seeking a second career. One was an assistant professor of English at the college.
The worst mass shooting in Oregon history also injured several others at Umpqua Community College in Roseburg, Oregon. The gunman died following a shootout with police.
Some family members took to social media early after news of the shooting broke, expressing concern that they hadn't yet heard from relatives. Many used that same platform to express their heartbreak once their worst fears were confirmed.
THE VICTIMS
Kim Saltmarsh Dietz, 59
Dietz loved the outdoors, her 18-year-old daughter and her two Great Pyrenees dogs, said Robert Stryk, the owner of Pyrenees Vineyards in Myrtle Creek, where Dietz worked as a caretaker for many years.
Dietz was taking classes at the same college as her daughter, who was unhurt in the shooting, Stryk said.
"That's really the tragedy here, is that this is a woman who was just trying to better herself," he said.
Dietz's ex-husband, Eric, is the vineyard manager, and both were still close friends, Stryk said.
Eric Dietz, who had posted updates on his Facebook page while searching for news of his daughter and ex-wife, on Friday posted a picture of Kim and confirmation of her death "with deep grief in my heart."
Stryk said that the two had met in Southern California, but that Kim Dietz was originally from England.
"She was a very energetic, very kind, kind soul," he said. "Kim was an exceptional woman."
Lucero Alcaraz, 19
Alcaraz' father fought back tears and anger outside of his Roseburg home Friday.
"There is no sense in talking about it. It's in vain," Ezequiel Alcaraz said in Spanish. "What's the point in showing our pain?"
Lucero's sister, Maria Leticia Alcaraz, posted to Facebook that her sister was missing, then broke the news that she was dead.
"Never in a million years would I have imagined going through something like this. She was my best friend and my sister," she wrote. "I can't begin to describe how I feel. I'm full of anger, pain, sadness, regret that I didn't get the chance to see her or prevent this from happening."
Maria Leticia Alcaraz wrote of being proud of her sister for getting scholarships that would cover the entirety of her college costs, and for the fact that she was in college honors and wrote that she "would have been a great pediatric nurse."
"You were going to do great things," she wrote.
Jason Dale Johnson, 33
Johnson had just started his first week at the college, his mother told NBC News Friday.
Tonja Johnson Engel said that her son had struggled with drug abuse, but decided to continue his education after completing a six-month rehab program with The Salvation Army in Portland.
"The other day, he looked at me and hugged me and said, 'Mom, how long have you been waiting for one of your kids to go to college?' And I said, 'Oh, about 20 years,'" Engel told NBC News.
She said that her son kissed her before he left for class Thursday morning.
"Love ya," Engel told NBC her son told her. "I'll see you this afternoon."
In a family statement read by police Friday, Jason's mother said that Jason was proud of himself for enrolling in school, and so was his mom. They felt that Jason had finally found his path. His family says that he will be loved and missed.

Quinn Glen Cooper, 18
In a statement issued Friday, his family wrote that "Quinn was funny, sweet, compassionate and such a wonderful loving person."
"He always stood up for people," the statement reads. He was going to take his brown belt test next week, and loved dancing and voice acting and playing Ingress with his older brother, Cody.
"Our lives are shattered beyond repair," his family wrote. We send our condolences to all the families who have been so tragically affected by this deranged gunman. No one should ever have to feel the pain we are feeling. Please remember the victims and their families. Please remember Quinn."

Lucas Eibel, 18
A statement by his family says that Eibel, who was studying chemistry, loved Future Farmers of America and volunteering at Wildlife Safari and Saving Grace animal shelter.
"He was an amazing soccer player," a family statement reads. His family also noted his academic achievements, including graduating Roseburg High School with high academic marks, receiving a Ford Family Foundation scholarship, and receiving an Umpqua Community College scholars award.

Lawrence Levine, 67
Levine was an assistant professor of English at the college.
Sarena Dawn Moore, 44
From nearby Myrtle Creek.
Treven Taylor Anspach, 20
In a written statement read by officials, his family said that he was "one of the most positive young men, always looking for the best in life."
"Treven was larger than life and brought out the best in those around him," his family wrote.
Rebecka Ann Carnes, 18
From nearby Myrtle Creek.
Associated Press 2015